A revolutionary drug can drastically slash the risk of women with the ‘Angelina Jolie gene’ dying from breast cancer.

Scientists studied nearly 2,000 women with early-stage cancer, all of whom had the BRCA1 and BRCA2 mutations.

Half were given olaparib tablets to take twice a day for a year, while the others were given a placebo.

Results showed death rates were 32 per cent lower among patients given the drug four years later.

Charities today called the findings ‘hugely exciting’, saying the discovery may spare the lives of thousands of women.

A team of UK and US researchers studied 2,000 women with BRCA1 and BRCA2 early-stage cancer and gave half of them tablets of olaparib (pictured) twice a day for a year. Results showed those who took the drug, which kills cancer cells, were 32 per cent less likely to die from the disease four years later 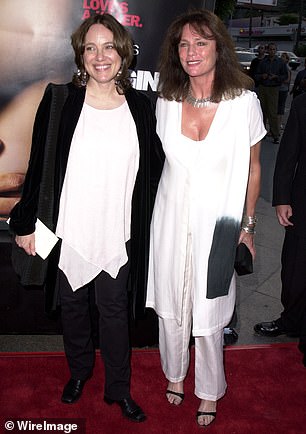 Angelina Jolie (left) brought the BRCA1 gene to attention in 2013 when she revealed she had chosen to have a double mastectomy and her ovaries and fallopian tubes removed aged 37. Jolie’s mother Marcheline Bertrand (pictured right, with actress Jacqueline Bisset, right) died at 56 after battling with breast and ovarian cancer

Everyone has BRCA1 and BRCA2 genes, which normally protect against breast and ovarian cancer by repairing cell damage.

But mutations in the genes can cause cells to malfunction, raising the risk of women being struck down with the diseases.

Around five per cent of all breast cancers are linked to the pair of faulty genes, made famous by the Hollywood actress.

Jolie underwent a preventative double mastectomy in 2013 after testing positive for the mutated BRCA1 gene.

Olaparib, sold under the brand name Lynparza, has already been shown to slash the chance of the inherited cancer spreading.

But the new findings, by a team of British and American researchers, are the first to show the drug also reduces the risk of death by a third.

NHS drug watchdogs are assessing whether it should be made widely available for patients in the UK. Only a select group can currently access it.

WHAT ARE BRAC MUTATIONS, KNOWN AS THE ‘JOLIE GENE’?

BRCA1 and BRCA2 are examples of genes that raise your cancer risk if they become altered.

We all carry certain genes that are normally protective against cancer. These genes correct any DNA damage that naturally happens when cells divide.

Inheriting faulty versions or “variants” of these genes significantly raises your risk of developing cancer, because the altered genes cannot repair the damaged cells, which can build up and form a tumor.

Around one in 400 people have a faulty BRCA gene.

For every 100 women who have the BRAC gene, 65 to 79 will develop breast cancer and 36 to 53 will develop ovarian cancer.

The US last week approved olaparib, made by AstraZeneca and Merck, for those with breast cancer who have an altered BRCA gene.

Experts enrolled 1,836 women from 600 hospitals around the world who had breast cancer classed as HER2 negative – meaning it is less likely to grow.

All participants had a mutation in their BRCA1 and BRCA2 genes and had undergone standard cancer treatment, including surgery, chemotherapy and radiotherapy.

Half received 300mg of olaparib twice a day for a year, while the others were given a placebo drug.

Cancer cells with a change in the BRCA genes rely on a protein called PARP to keep their DNA healthy.

Olaparib, which can cost in the region of £ 2,500 for a two-week course, stops PARP from repairing DNA damage in cancer cells, causing them to die.

Researchers, who have so far monitored the participants for four years, found those who took the drug were 32 per cent less likely to die.

The study was led by a team from the Institute of Cancer Research London (ICR), US research center NSABP Foundation, the Dana-Farber Cancer Institute in Boston and Edinburgh University.

Professor Andrew Tutt, chair of the study’s steering committee, said the results show olaparib can ‘keep more women with inherited breast cancer free of disease and alive and well after their initial treatment’.

He said the results show that olaparib can ‘directly target the weakness’ in the cancer of women with BRCA mutations and ‘improve their survival’.

The oncologist said: ‘I hope to see BRCA1 and BRCA2 testing used for more women diagnosed with early-stage breast cancer, so that we can determine who can benefit from this personalized treatment approach.

‘Olaparib provides a much-needed new individualized and targeted treatment option to keep more women with inherited breast cancer free of disease and alive and well after their initial treatment.’

He added: ‘Olaparib has major benefits for this group of patients, increasing their chances of remaining cancer-free and potentially being cured after initial treatment.

‘We hope olaparib will now be licensed in Europe and approved in the UK for NHS patients without delay.’

Dr Simon Vincent, director of research, support and influencing at charity Breast Cancer Now, said: ‘It’s hugely exciting this research shows olaparib could save lives and prevent recurrence in some women and men living with primary breast cancer with an inherited altered BRCA gene, often known as the “Jolie gene”. ‘

He said the ‘ground-breaking’ results will hopefully drive a ‘positive decision’ from NICE on the use of olaparib on the NHS, so ‘thousands of people with altered BRCA genes who may be eligible for the drug benefit from it as soon as possible ‘.

NICE in January rejected use of the drug on the NHS to treat prostate cancer after finding it was not value for money.

A trial of the drug found that men treated with olaparib lived 7.4 months before their cancer progressed, compared with 3.6 months when they received ‘one size fits all’ hormonal treatments.