The Bank of England is widely expected to hike interest rates on Thursday to combat surging inflation, but the economic fallout of the Ukraine war could force ratesetters to change course.

Markets are pricing in a 0.25 basis point rise in Britain’s key interest rate to 0.75 per cent, with the BoE signaling its intentions for gradual increases over the next year amid inflation forecasts of 7.5 per cent by spring.

But Russia’s invasion of Ukraine has exacerbated energy price spikes, a key driver of inflation, as well as weighing on the outlook for global GDP growth – sparking fears that the British economy could be struck by ‘stagflation’.

As the Ukraine war weighs on GDP growth and accelerates inflation, the BoE finds itself ‘in a bind’ over interest rates

The BoE has already hiked interest rates twice in recent months, but continuing to raise the cost of borrowing may further the cost of living crisis and worsen the slowdown in growth caused by the war.

In a paper published this week, the BlackRock Investment Institute (BII) said it sees the Ukraine war as’ reducing global growth [and] increasing inflation ‘.

It explained the war’s impact on energy costs represents ‘a major supply shock layered onto an existing one… resulting in higher inflation and lower growth, especially in the euro area’.

It added: ‘This puts central banks in a bind: Trying to contain inflation will be more costly, and they can’t cushion the growth shock.’

Europe will bear the brunt of a ‘large, stagflationary shock’, according to BII, with the European Central Bank forced to downgrade growth forecasts and boost inflation predictions, while the US will be most cushioned. 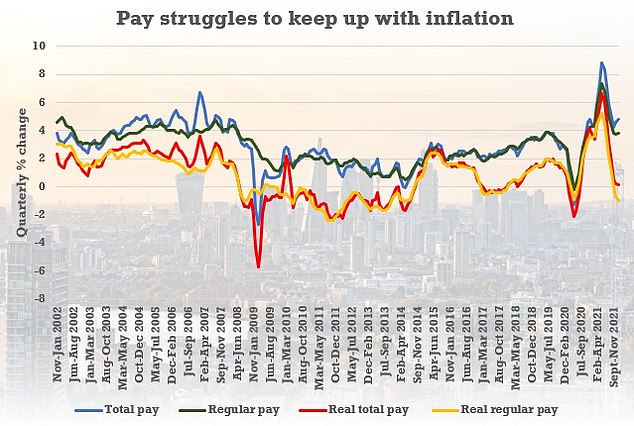 Growth in average total pay – including bonuses – was 4.8 per cent in the quarter to January but regular pay increases were lower at 3.8 per cent. Accounting for inflation that was equivalent to a one per cent fall in spending power.

BII still expects the BoE to hike interest rates this week but says that a low-growth, high-inflation environment means that central banks will have less room to tackle spiraling prices going forward.

‘We still see a historically muted cumulative response to inflation; more aggressive tightening would come at too high a cost to growth and employment, ‘it added.

‘Central banks will be forced to live with inflation. But it’s tough to see central banks coming to the rescue to halt a growth slowdown in the inflationary environment. ‘

Better than expected GDP growth figures published by the Office for National Statistics last week added to market certainty of a BoE rate hike on Thursday, as the economy finally grew above pre-pandemic levels.

But this reflected a period prior to the Ukraine war and therefore does not give a full view of health of the economy.

He explained: ‘Q2 growth was expected to slow considerably from the last four quarters, to “land” around 2 per cent in 2023.

‘This may now be wishful thinking. Soaring energy bills, increased national insurance contributions for the Chancellor and higher interest rates feeding into variable-rate mortgages… altogether are likely to slow down UK consumption.

‘A recession is probably not on the cards, though. It is much more likely to be “stagflation” than a recession. ‘

Perera said it is still ‘likely’ that the BoE ‘will start hiking as if nothing new had happened’ but wait to see how consumers react to rising prices before acting further.

ONS employment figures published on Tuesday added to concerns that inflation will spiral beyond even worst-case estimates of 8.5 per cent.

The figures revealed a tight labor market in which wage growth is falling well behind inflation. 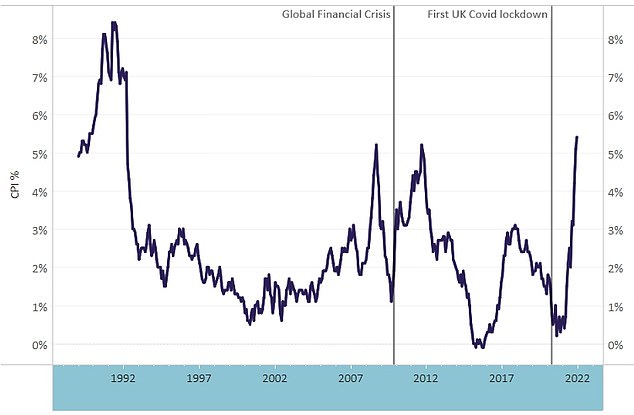 CEO of YOU Asset Management, Derrick Dunne, said the labor shortage ‘is in danger of becoming a bigger issue that feeds further inflation’ as employees fight for wage rises.

He added: ‘The BoE will be very conscious that this may have the effect of entrenching inflation more deeply into the economic landscape, by ensuring a vicious cycle of more wage growth and inflation.

‘It’s a many-sided challenge that the Bank’s Monetary Policy Committee will be keen to tackle sooner rather than later, and today’s employment data will be front of mind when they meet this week to vote on interest rates.’

Head of investment analysis at AJ Bell Laith Khalaf said the BoE will go ahead with Thursday’s interest rate hike, but it is likely to pull-back the pace of its planned hiking cycle over the next year.

He explained: ‘Seeing as monetary policy decisions take about eighteen months to reach the peak of their effect, the Bank of England may now be looking forward to 2023 with more trepidation, and that could cause some reluctance to tighten policy aggressively.

‘In the next meeting we may see more caution from the Bank of England, though for the moment that’s most likely to feed into the commentary accompanying the interest rate decision, rather than affecting the decision itself.

‘In the longer term the Bank may find itself wedged between a rock and a hard place, faced with an unpalatable choice between fighting inflation and supporting the economy.

‘For now though, the smart money remains on the Bank of England following through on interest rate rises, but the Ukraine crisis has heightened the chances of a policy error in both directions.’