Testifying before Congress earlier this month, Jay Powell was asked if the Federal Reserve was prepared to “do what it takes” to get inflation back under control – and if necessary, follow in the footsteps of his venerated predecessor, Paul Volcker, who regained price stability “at all costs”.

Calling the late Volcker “the greatest economic public servant of the era”, Powell responded: “I hope history will record that the answer to your question is yes.”

The chair of the central bank on Wednesday sought to drive home that point, framing the first interest rate rise since 2018 as the start of a series of increases and emphasizing that the Federal Open Market Committee was “acutely aware of the need to return the economy to price stability and determined to use our tools to do exactly that “.

Volcker’s efforts to squeeze out inflation sent the US economy into a steep recession. But Powell struck an optimistic note at a press conference on Wednesday, saying the sheer strength of the US economy meant it could “flourish” in the face of less accommodative monetary policy.

Economists have welcomed Powell’s embrace of a much more aggressive policy approach, compared to the gradual pace signalled just three months ago. They warned, however, that the amount of monetary tightening potentially needed to quell inflation may produce much more economic pain than the Fed is willing to admit.

“This was a big, important step in the right direction,” said Ethan Harris, head of global economics research at Bank of America. “But there could be other much less friendly steps where they basically say, ‘we’re taking away the punchbowl and we’re really going to end the party’.”

Powell’s hawkish tilt was underscored by the so-called dot plot of individual interest rate projections, which showed officials expect to lift the federal funds rate to 1.9 per cent by the end of the year from the target range of 0.25 per cent to 0.50 per cent established on Wednesday – translating to six additional quarter-point increases this year.

Additional rate rises pencilled in for 2023 would bring the benchmark interest rate to 2.8 per cent. That is slightly higher than the level a majority of policymakers believe will neither hasten nor hold up growth, known as the neutral rate, which they pegged at 2.4 per cent.

At that pace, the majority of Fed officials forecast core inflation to moderate from 4.1 per cent by the end of 2022 to 2.6 per cent in 2023, before dropping to 2.3 per cent the year after.

While economic growth is set to slow from 2.8 per cent to 2 per cent over the time period, according to the new projections, policymakers saw almost no change in the unemployment rate. Unemployment is expected to settle at 3.5 per cent this year and next before ticking up only 0.1 percentage point by 2024, despite the large increase in rates.

“The problem is that they need to acknowledge at some point that the economy is going to have to slow and unemployment is going to have to rise to begin to take some of this extra inflation out of the system if there’s a risk of it becoming increasingly embedded, ”he said. “A lot of things have to go amazingly well for you to bring down inflation substantially.”

Hooper said it is possible the fed funds rate may need to rise as much as 1 percentage point above “neutral” to roughly 3.5 per cent in order to tame price pressures.

Even at the projected pace of tightening, Roberto Perli, a former Fed staffer, warned the central bank was “playing with fire”. He sees the risk of a recession rising for 2023.

“The risk is that the FOMC may be too focused on bringing down inflation and willing to roll the dice with respect to growth and the labor market,” said Perli, who is now the head of global policy research at Piper Sandler.

Powell on Wednesday again said the Fed would be “nimble” in its thinking about setting monetary policy, a point underscored by the wide range in central bank officials’ forecasts for the funds rate through this year, which spanned from 1.4 per cent to 3.1 per cent.

Constance Hunter, global head of strategy and ESG at AIG, said the diversity of views indicates “a Fed that has a certain amount of agility with regard to how it might respond to events as they unfold for the remainder of this year”. 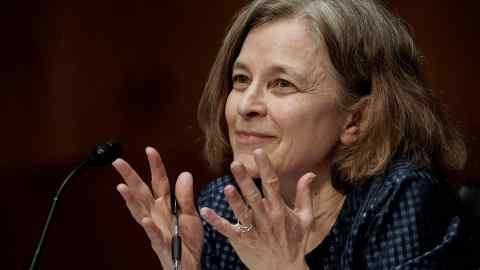 That may even mean reducing the pace of interest rate increases if growth slows too quickly, according to some economists, or using a policy tool the Fed has not deployed since 2000 – boosting the size of its rate increase to half a percentage point, said Jason Thomas, head of global research at Carlyle. It could also speed up the pace at which it shrinks its $ 9tn balance sheet.

With clear signs that inflationary pressures have rippled out well beyond the pandemic-affected sectors where they began, Sonal Desai, chief investment officer at Franklin Templeton, said it is much more likely the Fed will lean in a more hawkish direction and is forced to raise interest rates much more significantly than anticipated. The political environment makes that more probable as well, she said.

“It is rare for a central bank to have zero political pushback on tightening,” she said. “I think the level of conviction [of] the Fed comes from the fact that there is full, broad cross-party support for getting inflation under control, because it is the single most significant issue for Americans. “