She has been enjoying a sun-soaked getaway Thailand with her fiancé Carl Woods.

But it seemed Katie Price had spent too much time in the sun as she showed off her shocking sunburn on the last day of her three-week holiday on the luxury resort island of Koh Samui.

An Instagram Stories video showed the former glamor model, 43, cutting a casual figure in a cropped T-shirt as she tucked into an array of tasty dishes.

Ouch! It seemed Katie Price had spent too much time in the sun as she showed off her sunburn on the last day of her three-week holiday on the luxury resort island of Koh Samui

Katie’s forehead and nose seemed to be bright red as she showcased her lobster red tan after she has spent the last few weeks sunbathing on sandy beaches.

Her new tattoo sleeves could also be seen, after she got two new sets of body art during her Thailand holiday, while her fiancé Carl also added to his existing ink.

She made the most of the last day of her sun-filled getaway before she was due to fly home, when she is set to appear in court after she was charged with harassing her former husband Kieran Hayler’s fiancée Michelle Penticost.

It came one day after she took to her Instagram Stories to show off her peeling nose and face as well as her burnt lips. 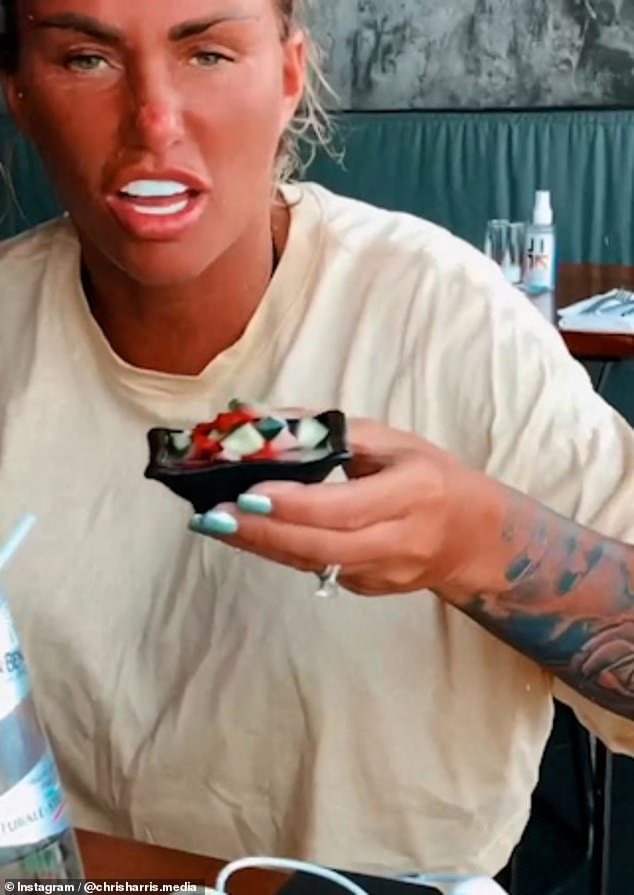 Holiday: An Instagram Stories video showed the former glamor model, 43, cutting a casual figure in a cropped T-shirt as she tucked into an array of tasty dishes

The reality star also posted a picture of a very red-looking Carl, who she described as a ‘lobster’ as the pair enjoyed a night out.

In her snap, the tip of Katie’s nose, her forehead and her bottom lip were visibly damaged by the strong sun.

Her lobster red snaps come as she has extended a slashed rate on her OnlyFans account for another month. 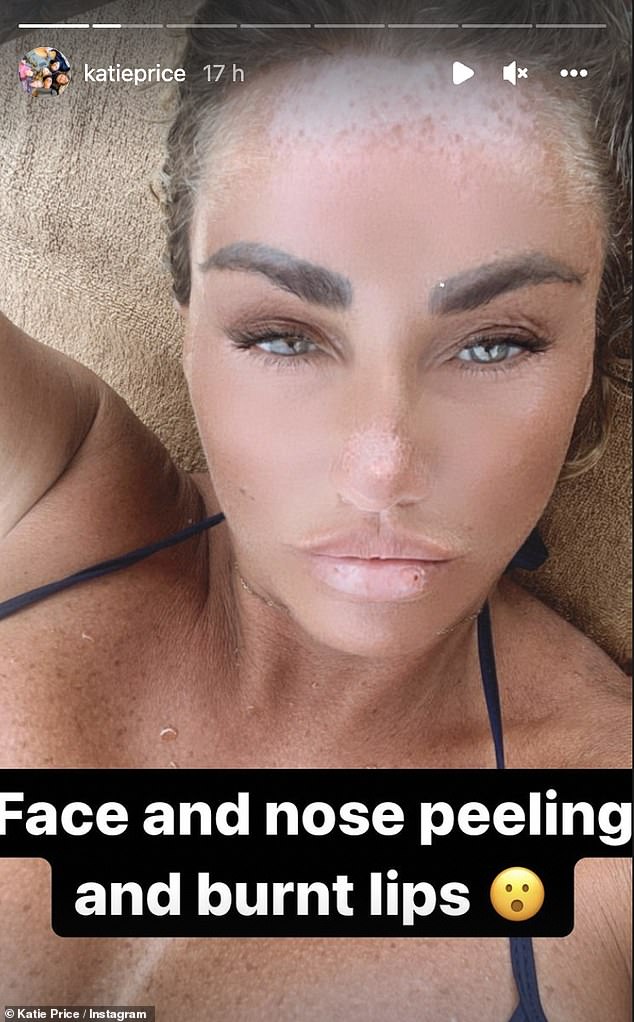 Painful: It came one day after she took to her Instagram Stories to show off her peeling nose and face as well as her burnt lips

Now, Katie has extended the discounted deal for her racy content on the subscription-based website until April 15.

Former Celebrity Big Brother housemate Katie has been keeping fans up to date with her vacation activities, with the star getting some new body art this week.

In pictures shared on social media, Katie could be seen sitting in the chair as the tattoo artist worked on her arm with the needle.

Her new body art consisted of a unicorn surrounded by an array of flowers, while her existing crown tattoo dedicated to her daughter Princess sat below it. 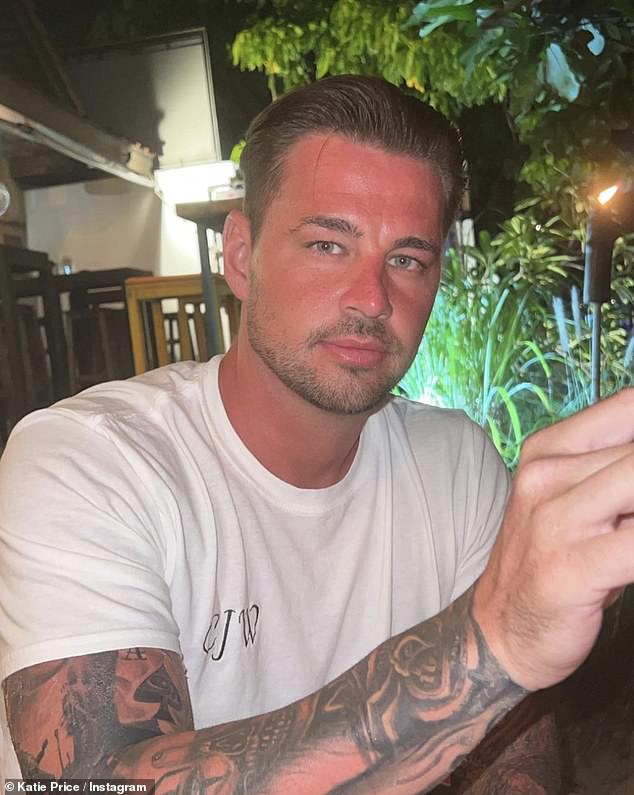 Rosy cheeks: Reality star Katie also posted a picture of a very red-looking Carl, who she described as a ‘lobster’ as the pair enjoyed a night out

The crown once sat below the name of her ex-husband Peter Andre, but the ‘Pete’ ink was later covered by a picture of a rose after their split.

Katie’s sleeve tattoo came after she covered up the heart rate tattoo she got while ‘drunk in Miami’ with a new floral inking in tribute to her terminally-ill mother.

The tattoo on her right arm, which she got just days earlier in Thailand, comprises of lilies, daffodils and hyacinths on her forearm and cost approximately £ 180.

The ink covered up a bracelet tattoo which featured the initials of each of her children – Harvey, 19, Junior, 16, Princess, 14, Jett, eight, and Bunny, seven. 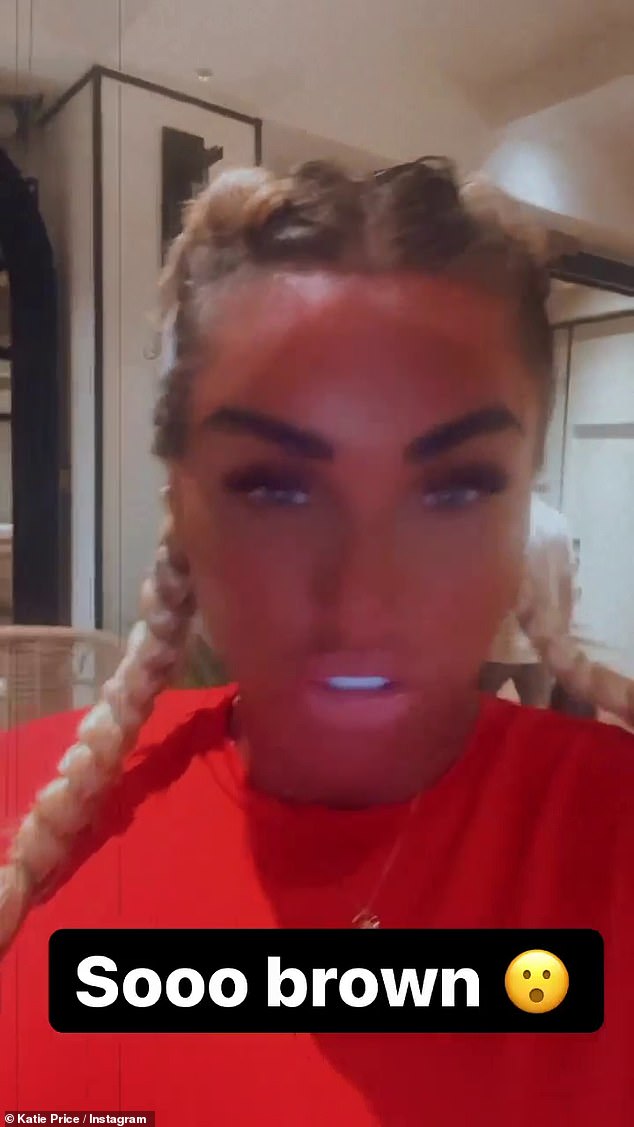 Red-hued: The former glamor model, 43, took to her Instagram Stories on Thursday to show off her peeling nose and face as well as her burnt lips 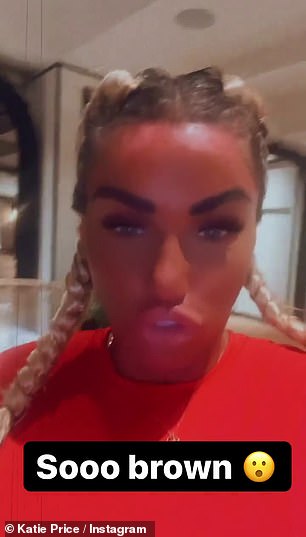 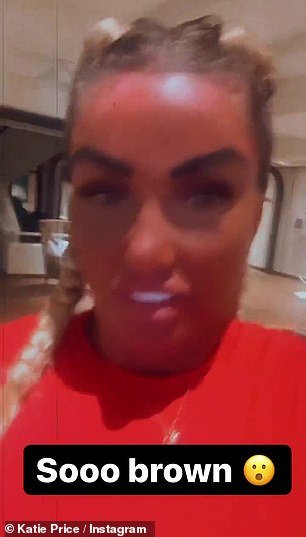 Clip: On Tuesday and shared a clip of herself in a bright red top with her blonde hair styled into plaits

It also covered up an inking of her and Carl’s nickname ‘Priceywoods’ by her elbow and another tattoo of Carl’s name, which featured across her wrist.

But when getting her first sleeve, Katie left room for her tattoo of Carl’s face, which still features prominently on the inside of her forearm.

Despite previously admitting she hates needles, she looked relaxed while going through the process.

The star could be seen scrolling on her mobile phone while peering over her now more-than-ample assets after her most recent boob job.

Katie hit the tattoo parlor after she was charged with harassing the fiancée of her former husband Kieran Hayler.

MailOnline learned Katie will appear before magistrates in Crawley next month for breaching a restraining order against Michelle Penticost.

The troubled model was arrested on January 21 for sending an abusive text to Michelle. 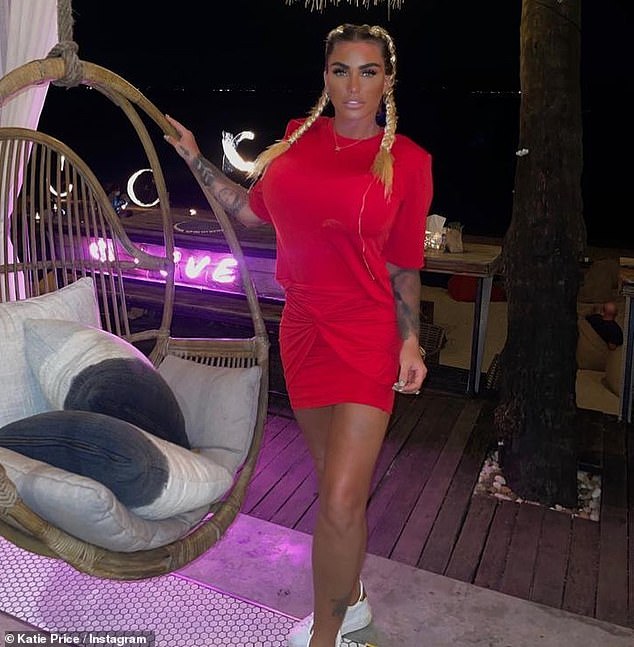 Fresh ink: Katie showed off a second sleeve of tattoos in a new Instagram snap shared on Wednesday

MailOnline understands that she breached the order a second time when she sent an anonymous letter attacking Michelle to a relative just before flying out to Thailand. 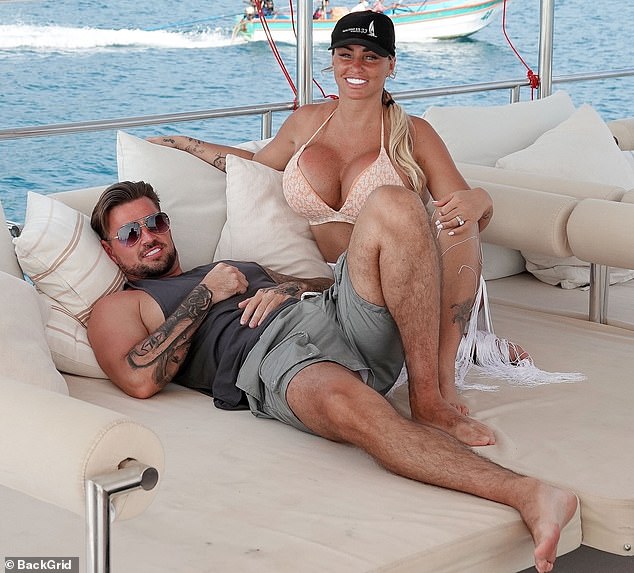 Thailand: It comes after Katie has been charged with harassing the fiancée of her former husband Kieran Hayler and will appear in court when she returns home from Thailand

A source said: ‘Katie is playing a dangerous game and her actions have led her into deep trouble.

‘Kieran and Michelle were deeply concerned after discovering she sent a letter, believing Katie is ignoring the rules of the restraining order as this is the second time it’s happened in three months.

‘It was sent anonymously from Heathrow on the day she left for Thailand. 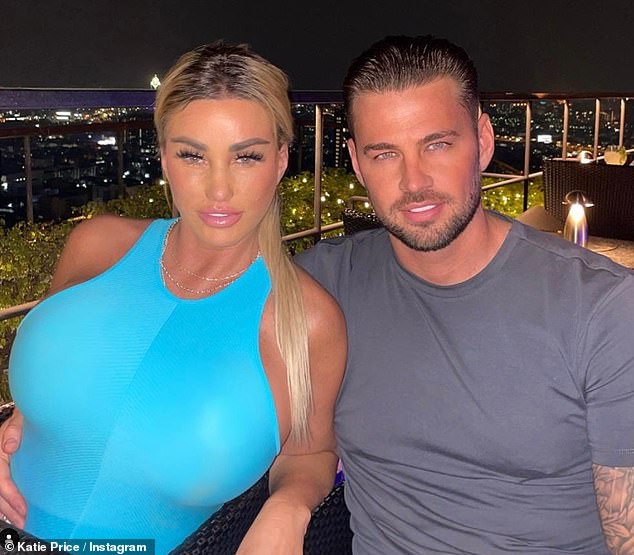 Couple: The star is joined on her holiday by her fiancé Carl Woods

‘They know it’s her and are concerned by her unpredictable behavior.’ 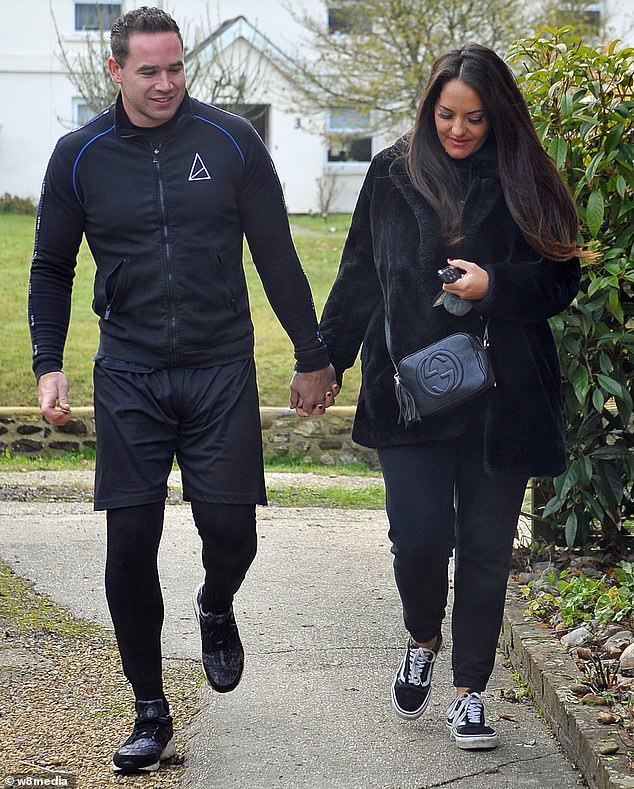 Charged: Kieran Hayler with fiancée Michelle Penticost whom Katie is alleged to have harassed

Mother-of-five Katie was banned from contacting Michelle, 39, ‘directly or indirectly’ after swearing at her in a school playground in 2019. 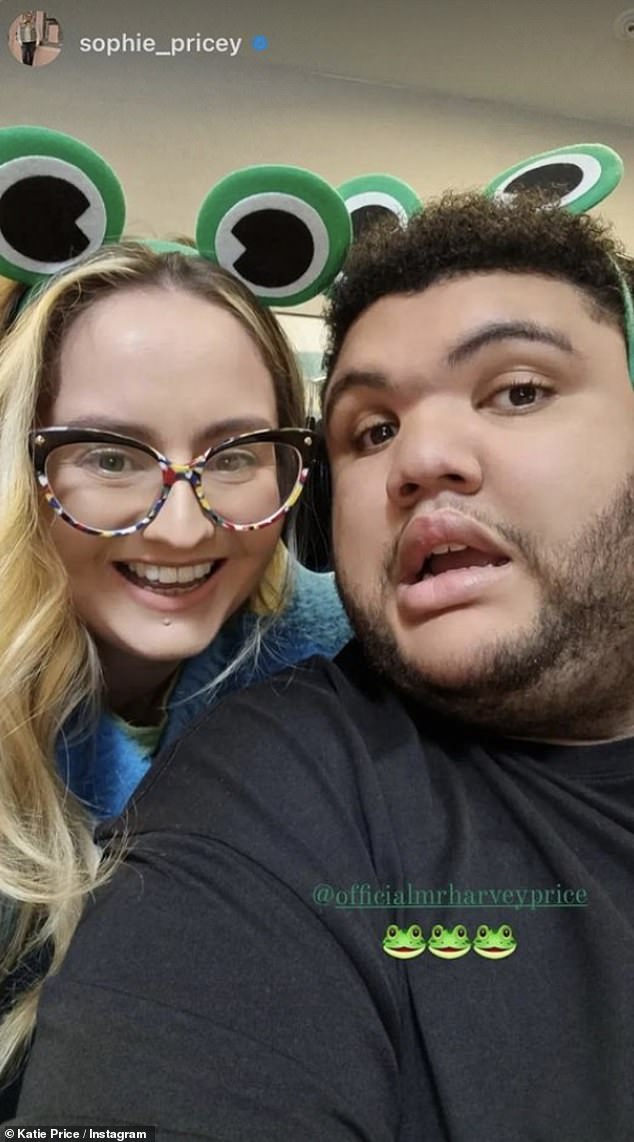 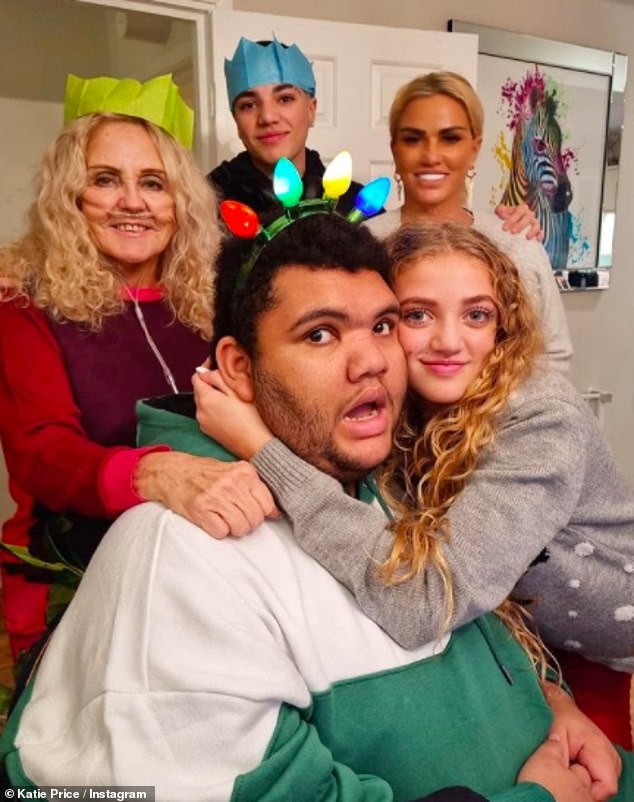 She also has her own child with the ex-stripper, seven-month-old son Apollo, and a ten-year old son Valentino from a previous relationship. The couple met in 2018 and got engaged the following year.

She was previously married to Peter Andre, father of her two children Junior, 16, and Princess, 14, for four years, before her ill-fated marriage to husband No2 Alex Reid, which lasted just 11 months.