OH you lucky Ukrainians. Surrounded on nearly all sides by heavy Russian artillery.

But fear not, Kyiv.

A battalion of earnest luvvies, armed with ribbons, badges and dresses, wants you to know they “stand with Ukraine”. Not near Ukraine, obviously, like Martin Roberts off Homes Under The Hammer. They’re not that committed.

They were, though, definitely, probably, very occasionally “with you” at the Albert Hall, for the 75th Bafta awards, on Sunday night, BBC1, where the mercies were predictably small and brief.

On the plus side, however, a significant number of winners, including Will Smith and director Jane Campion, CBA’d (Couldn’t Be Arsed) and Benedict Cumberbatch didn’t win Best Actor for Power Of The Dog, so we were spared an outpouring of his sun-tanned conscience.

Sadly, though, Rebel Wilson could be with us and was, endlessly. They’d got her to host the damn thing, in fact. 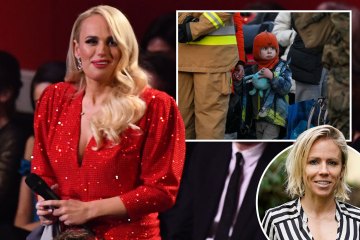 Although, as she was very keen to tell us, five stones of Rebel had gone missing, since we last saw her. Which must have been the funny part.

For, it’s no exaggeration to say, there were times, on Sunday, when I longed for Benedict Cumberbatch to lecture me about housing refugees.

And they were always during Rebel’s links.

Just ten years ago, of course, this would not have been such an insurmountable problem.

No matter how sycophantic the host got, there would always be a clip or a speech, or something beyond the latest Bond release, that would make you want to visit the cinema.

No more. Bafta’s done with fripperies like entertainment and box office or anything other than bending you to its political will. These awards are now a reprimand, a warning and one hideously long game of woke Bingo, with a full house arriving the moment Rising Star winner Lashana Lynch mentioned: “The Windrush generation.”

It meant, unfortunately, the salvage job fell entirely to Rebel, which we now understand to be a bit of a misnomer.

Rebel? She’s so conventionally PC she started by greeting “gender-fluid youth,” then threw JK Rowling under the transbus before crushing all of my remaining expectations with the pay-off to her joke about playing James Bond: “Because of the gender pay gap I won’t be 007. . . I’ll be 004.5. “

There’s no winning an audience back once you’ve opened with that sort or gag, or reviving viewers at home after you’ve told them there’s going to be an American version of Belfast: “It’s called Bel-fast and Bel-furious. . . “

It’s only going one way and, on Sunday, it got so bad you could feel the mood of the hall lift when it was time for the obituaries.

Death at least meant there was no chance of Rebel flinging more gold bras at the audience or arriving with another cake and telling some other mortified bloke, as she did with Benedict Cumberbatch that she’d like to have sex with him.

‘Cos that’s the thing about being woke. It’ll never allow you to be funny, but you can be as hypocritical as you like.

At the previous week’s Comedy Awards, Judi Love did it. On Sunday night, inevitably, it was Rebel Wilson.

This irked me a lot, for all the obvious reasons (cinema, like TV, doesn’t now create a lot of good roles for men) and because the only person who made Rebel look good was a bloke, Andy Serkis, who got so stuck explaining the sub-clauses in his Priti Patel joke it took him nearly a minute to spit out the punchline.

It’s also worth pointing out it meant, on the night, there were as many jokes about the Home Secretary, PM and Donald Trump as there were about Vladimir Putin – who was given the finger by Rebel Wilson, but nothing else.

This, I think, is because, for all their Ukrainian ribbons, most film actors are far more wrapped up in their own imagined struggles than they are with real ones and have the same narrow and totally inflexible world view as Bafta, who believe all of life’s evils are caused by racism, sexism and capitalism and don’t want you going anywhere near a cinema unless you’re prepared to agree with them about everything. Yet every year, without fail, the BBC expects us to join in with this wretched, hectoring back-slap of an occasion, begging a very simple question. Why?

Unexpected morons in the bagging area

THE Chase, Bradley Walsh: “Used for ice patrol, what type of vehicle is the Royal Navy’s HMS Protector?”
Sally: “A salt gritter.”

Lightning, Zoe Lyons: “The official English name for the country of Switzerland is The Swiss?”
Mo: “Cottage.”

The Chase: Celebrity Special, Bradley: “Which of these groups of people lives closest to the North Pole? Guarani? Inuit? Zulu?”
Charley Webb: “Zulu.”

The Apprentice, Brittany: “Thanks Claude. It was nice to meet you. “

The Baftas, Rebel Wilson: “How good is it that awards shows are back in person?”

Not good, Rebel. Not good at all.

THE mood Rebel Wilson’s put me in? There’s only one episode of Joanna Lumley’s Great Cities Of The World I want to see right at this moment.

But I’m not sure she’d be able to get the right accreditation for Kyiv.

So instead, last night, a select band of ITV masochists endured Joanna’s Great Cities Of The World: Paris, which really did bring out the “Golly gosh” worst in our host along with her O-level Frog, a bit of poetry and a desperate need to be “mistaken for a French woman”, even if it was only Madame Fanny La Fan off ‘Allo’ Allo!

Along the way she also bumped into a French comedian called Olivier Giraud, who proved to be about as funny as the Reign of Terror of 1793, a group of feminist protesters (ditto) and model Daphne Guinness, who Joanna assured us looked “sensational” when the whole world could see she’d actually arrived for lunch trussed up like an oven-ready Desert Orchid.

Joanna was in a similarly sycophantic mood about the entire city, of course, which isn’t the most staggeringly rude place on earth.

Golly gosh, no. Its citizens just have a “nonchalant confidence”.

And none of them were more nonchalant or confident than the anonymous old saucepot she met, in the 19th Arrondissement (just by the pampas grass) who compared her typically Parisienne extra-marital affairs to a trip to the boulangerie and wanted to know if Joanna, “Had any thoughts about going to the pastry shop?” herself.

Not until Greggs the boulanger introduces a cheese and Viagra bake she doesn’t.

A) Veterinary expert Paul Manktelow to Sophie Morgan on Crufts.

B) The Script Editor to Joanna Lumley before she interviewed Daphne Guinness on Great Cities Of The World?

MEANWHILE, at the Dancing On Ice semi, all three of the show’s trained celebrity dancers, Regan Gascoigne, Brendan Cole and Kimberly Wyatt, right, made it through to the final and Phillip Schofield admitted: “I don’t know how we sum this up. “

Channel 4’s Fame In The Family, where four complete strangers meet in a Manchester restaurant and try to work out which one of them shares DNA with a minor celebrity.

Although, hopefully Anglia TV will now green-light my own spin-off where four complete strangers meet in the Norwich branch of Bella Italia and try to work out which one of them doesn’t share DNA with a minor celebrity.

Fingers crossed. All 11 of them.

Lookalike of the week

Sent in by Chris Davies, of Bridgend, South Wales.

Tim Sherwood: “The game plan is what you’re planning in the game.”

Yeah, they could, if Wayne Rooney had shoved the players in his Vitamix Explorian blender.

THE great Claude Littner returning for The Apprentice interviews and telling Kathryn her business plan was “the rantings of a lunatic”.

Jim Rosenthal, the ultimate TV professional, making sense of Crufts above the barking din. And the latest round of makeovers on ITV’s Starstruck, which included three Barbra Streisands, who should definitely tour seaside venues under the name Mentl Yentl, and a Gary Barlow impersonator called Craig who came up with the perfect compromise after spending 20 years as a semi- professional Meat Loaf tribute act.