Mobocertinib tablets will be given to patients battling a rare and aggressive form of the disease, Britain’s biggest cancer killer.

Roughly 100 people will be eligible to take the drug every year, with doctors set to start to dishing it out within weeks.

Health Secretary Sajid Javid said mobocertinib was a ‘lifeline’ for dozens. Trials have shown it can extend the lives of patients by up to two years.

NHS officials struck a deal for the drug, thought to cost almost £ 19,000 ($ 25,000) for a month’s supply, with Japanese pharmaceutical firm Takeda.

He said it was ‘fantastic news’ for patients battling the rare type of cancer, which is driven by a type of altered gene called epidermal growth factor receptor exon 20 insertion mutations.

NHS drug watchdogs have approved mobocertinibc, brand name Exkivity, for a specific group of lung cancer patients, with about 100 patients per year expected to receive it in England 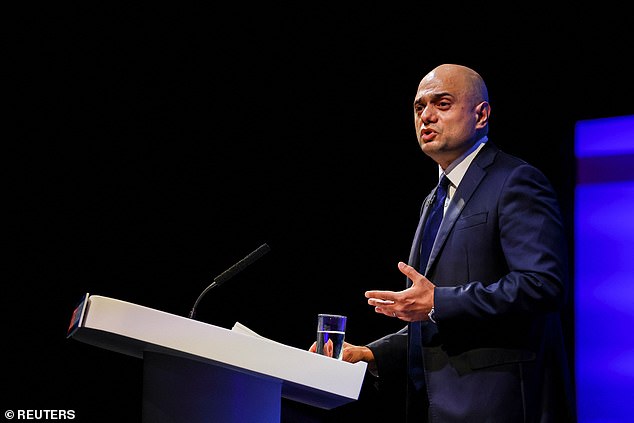 Mobocertinib: what do we know about the new drug the NHS is using?

What type of drug is mobocertinib?

Mobocertinib is a kinase inhibitor.

Kinase is type of enzyme which promotes cell growth.

There are many types of kinase.

Mobocertinib blocks a specific type of kinase from working which helps slow the growth of cancer cells in a particular type of tumor found in some lung cancer patients.

What benefits does it have for patients?

Mobocertinib only works on a specific type of lung cancer cancer which has a certain mutated gene.

Clinical trials in patients with this type of cancer have suggested it can extend their life for up to two years.

How many patients are set to benefit here in the UK?

NHS England estimates about 100 people will benefit from from this treatment per year.

It will only be given to patients who’ve already undergone chemotherapy and whose cancer can’t be removed surgically.

How much does it cost?

It is estimated to cost just under £ 19,000 per month though the NHS is acquiring it on a zero-profit basis for the manufacturer.

It comes in tablets which people prescribed it take one of each day.

Are there any side effects?

It can cause slow or irregular heart beats that can lead to heart failure as well as severe diarrhoea.

Patients have their heart health measured before being prescribed the drug and are regularly monitored while they take it.

Other more minor side affects like rashes and vomiting have also been reported.

Nowhere else in Europe has yet to receive the drug, although the US approved the drug for use in September last year.

Professor Powis added: ‘This is the latest in a long list of deals we have struck to provide the latest cutting-edge cancer treatments for patients – at an affordable price for the taxpayer.’

Exkivity is the branded name of the drug. Mobocertinib inhibits a type of kinase, an enzyme which promotes cell growth, found in a some types of lung cancer, slowing the growth of the disease.

It has a number of possible side effects including serious ones like heart failure, and severe diarrhoea.

It is only given to patients who’ve already undergone chemotherapy, whose cancer can’t be removed by surgery.

The cancer the drug targets is called non-small cell lung cancer, with between 4 to 12 per cent of tumors caused by this type of cancer having the altered gene that mobocertinib works against.

Patients will have to undergo a test to determine if the cancer they have could be slowed by the drug.

Trials show that some patients who have taken mobocertinib have lived for two years after being treated with the breakthrough drug.

NHS England significantly longer than expected for patients with this type of lung cancer.

Mr Javid said: ‘NHS patients are the first in Europe to benefit from this cutting-edge new treatment for lung cancer.

‘Mobocertinib is a breakthrough drug which will be a lifeline for those with this rare form of the illness.’

Mobocertinib will be accessible to eligible lung cancer patients in England on a zero-profit basis for the manufacturer to the NHS while NICE completes its ongoing appraisal.

Helen Knight, program director in the center for health technology evaluation at NICE, said she was ‘delighted’ about the deal.

This is the fourth drug made available by the NHS through an early national access agreement following a Project Orbis license.

Project Orbis is an international collaborative project between the drug approval authorities of the US, UK and six other nations.