Julia Fox has backtracked after claiming that her ex boyfriend Kanye West ‘wouldn’t hurt a fly’.

When she initially made her remarks, she had been asked about Kanye’s visuals for Eazy which depicted Pete Davidson, 28, the boyfriend of his estranged wife Kim Kardashian, 41, being brutally attacked by a skinned monkey after being beheaded in a previous animation.

However, the actress, 32, has since claimed that she was only referring to the music video, and was not aware of the Instagram posts Kanye had also made at the time in which he verbally attacked Pete.

Whoops! Julia Fox has backtracked after claiming that her ex boyfriend Kanye West ‘wouldn’t hurt a fly’, adding that she ‘thought the question was in reference to a music video’

‘Believe it or not I have a life and a son, and I don’t have google alerts for this man!

‘Yeah I could just not answer questions but then it would be “Julia is mad she salty” etc and I’m not! It’s a real catch 22 so please stop F’n asking me!

‘I wish I had the answers, but I do not. I would like to remain an Indie Queen. The mainstream life isn’t for me. ‘

She had earlier told TMZ that the rapper, 44, was ‘harmless’ when asked whether Kim and Pete should be worried about their safety. 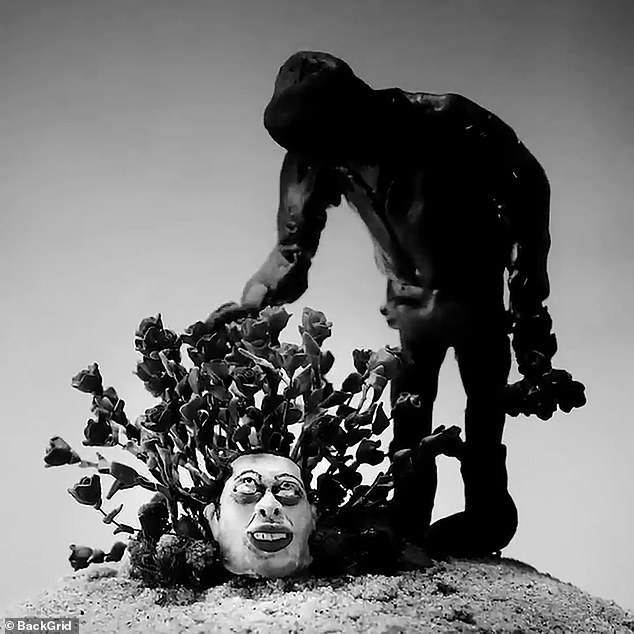 Gruesome: She was referring to Kanye’s visuals for Eazy which depicted Pete Davidson, 28, the boyfriend of his estranged wife Kim Kardashian, 41, being beheaded and buried 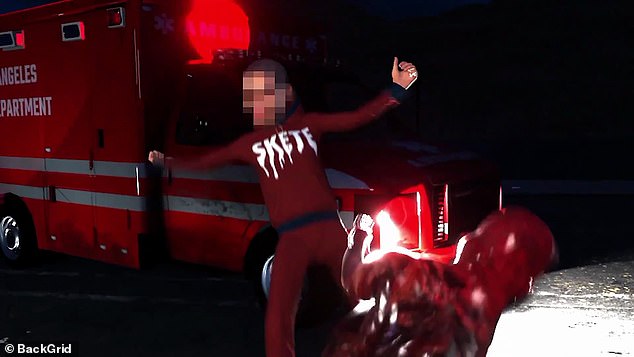 Gory: His animation was also brutally ATTACKED by a skinned monkey against a fire engine … which was thought to have be in reference to the SNL star’s late father and 9/11 hero Scott

The Uncut Gems star told the publication: ‘I just think that’s his artistic, creative expression. I know it’s aggressive but if it really came down to it, I don’t think Kanye would hurt a fly. ‘

Representatives for Julia and Kanye have been contacted by MailOnline for comment.

The Grammy winner had previously declared war on the comedian by burying his clay replica alive and decapitating him in the single’s previous visual.

Taking things a step further, a shocking new showpiece for his collaboration with The Game saw a blurred-out character wearing a ‘Skete’ hoodie battered by the grisly animal against a fire engine. 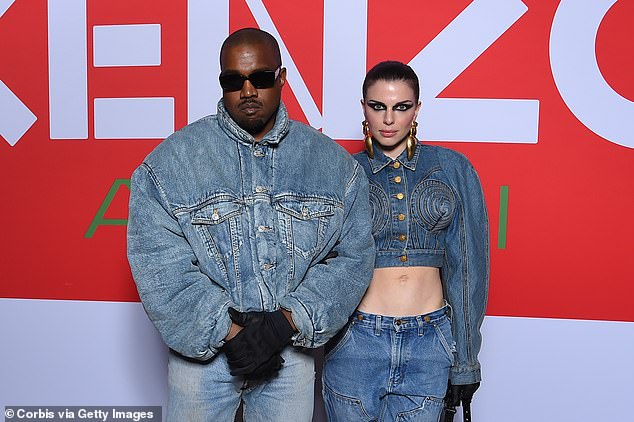 Backtracking: The actress, 32, allegedly wrote in a now-deleted Instagram post: ‘I would like to point out that I had not seen the latest Instagram posts at the time of this video’ (pictured with Kanye in January 2022)

It is thought to reference Pete’s late firefighter father Scott, who died while saving lives during the 9/11 attacks in 2001.

The musician continually refers to Pete as ‘Skete’ as a disparaging nickname, though the meaning of moniker remains unclear.

The grisly fictional assault took place against a fire engine during the night while the Famous songster watched on.

Meanwhile, Kanye says in his lyrics: ‘God saved me from that crash just so I can beat Pete Davidson’s a * s.’ 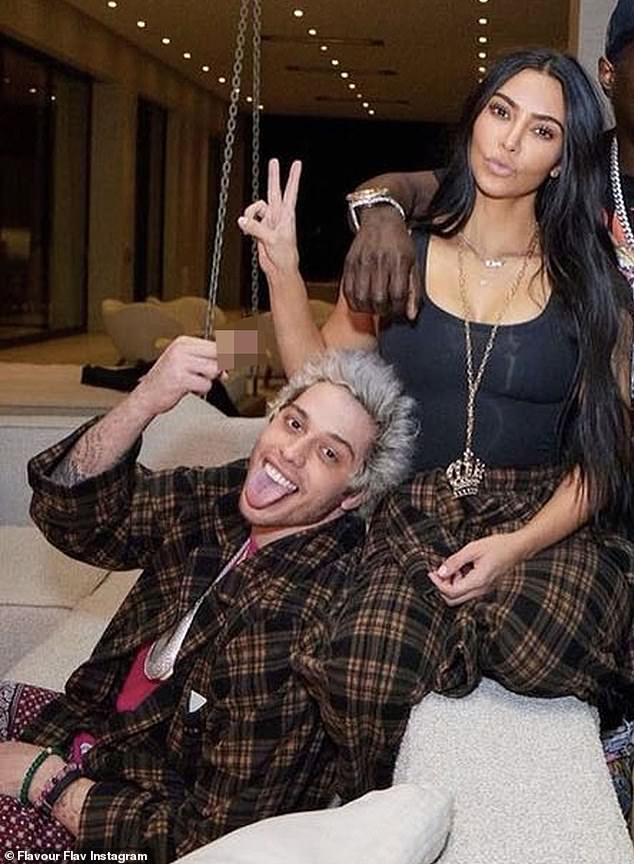 Let’s hope so! She had previously said that the rapper, 44, was ‘harmless’ when asked whether Kim and Pete should be worried about their safety

Horrified Twitter users labeled the animation as ‘harassment’ and ‘childish’, while others questioned why he was not receiving help.

A furious tweet read: ‘This music video is violent and cruel. Shame on you Kanye and The Game. ‘

Another raised concerns, penning: ‘Why is he not being helped? The guy is obviously losing his mind and has become obsessed with Kim and Pete. His people di lui if they care about Kanye need to step up and help the guy. ‘

Last month it all came to a head when Kanye shared screenshots from Kim where she pleaded with him to stop putting her current beau Pete in danger. 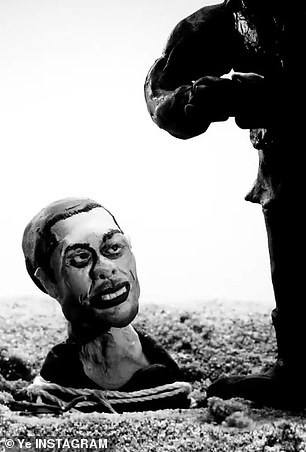 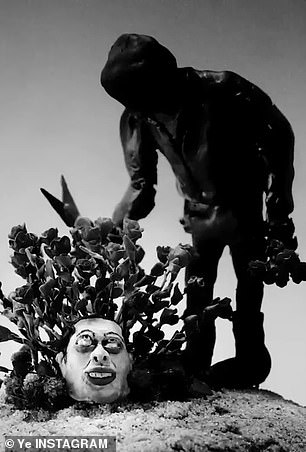 Bizarre: In the controversial music video a clay-animated version of Kanye is seen kidnapping a claymation Pete and burying him alive

The Jesus Walks hitmaker shared a shot from the 2001 film Baby Boy on February 14, in which Ving Rhames puts Tyrese Gibson in a violent chokehold, writing, ‘UPON MY WIFE’S REQUEST PLEASE NOBODY DO ANYTHING PHYSICAL TO SKETE IM GOING TO HANDLE THE SITUATION MYSELF . ‘

He posted a series of screenshot of texts from Kim saying he was making things uncomfortable for the SNL star.

In the texts, the reality star said, West was ‘creating a dangerous and scary environment and someone will hurt Pete and this will be all your fault,’ later saying, ‘There are dangerous people out there and this is scary and it doesn’ t have to be. ‘

The Can’t Tell Me Nothing rapper replied to his estranged wife via text, ‘I will always do everything to protect you and our family forever. And I listened to you and told everyone to make sure nothing physical happens to Skete. ‘

In a subsequent post, Kim asked the Heartless vocalist why he couldn’t keep any of their conversations private, to which he responded, ‘Cause I got a text from my favorite person in the world.’

The Bound 2 rapper continued to his former partner, ‘I’m your number one fan … Why wouldn’t I tell everyone !!!!’

In his attack the previous day, Kanye called Pate a ‘d *** head’ and shared a screengrab of his private text to him.

The comedian had texted the rapper: ‘… you as a man I’d never get in the way of your children. That’s a promise. How you guys go about raising your kids is your business and not mine. I do hope [some] day I can meet them and we can all be friends. ‘ 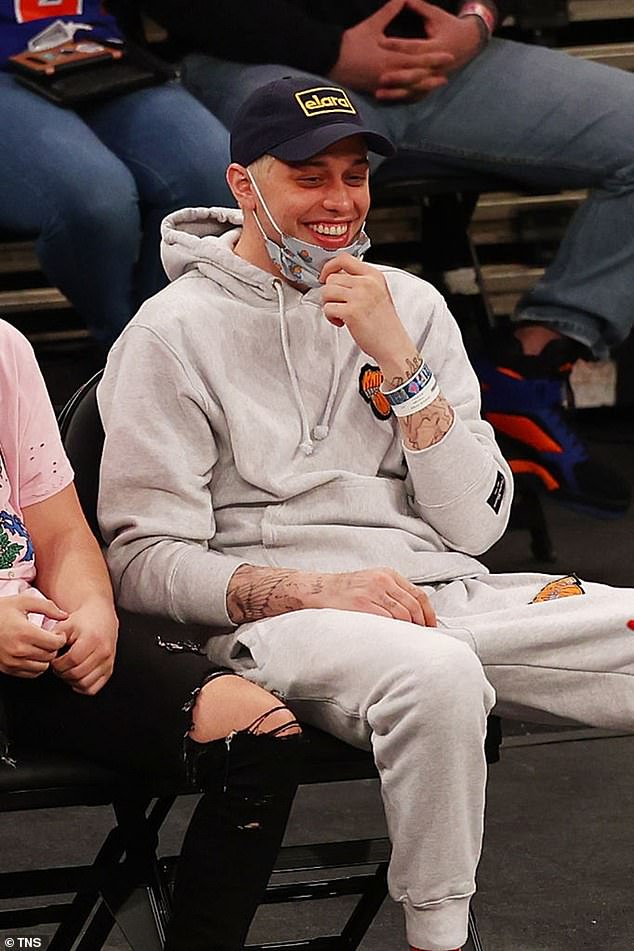 Amused: Pete reportedly thinks Kanye’s music video where he is seen burying a clay-animated version of Pete alive is ‘hysterical’ (pictured in 2021)

Kanye – who suffers from bipolar disorder – shared a snap of Pete with his friend Machine Gun Kelly in their underwear captioned: ‘No you will never meet my children.’

He had ‘no comment’ about a rumor that Ariana Grande ended her four-month engagement to Davidson over him allegedly sending intimate photos of the pair to her ex Mac Miller before his 2018 death.

The fashion designer seemed especially outraged that the Staten Island native – who’s in the process of lasering off all 100 of his tattoos – once had his ‘hero’ Hillary Clinton inked on his calf.

‘When I tag people I’m just putting together the web. There are a group of people who run media and the election. Thank god for free speech.

‘Look at this d *** head. I wonder if Instagram gonna shut down my page for dissing [Hillary] Clinton’s ex boyfriend. ‘ 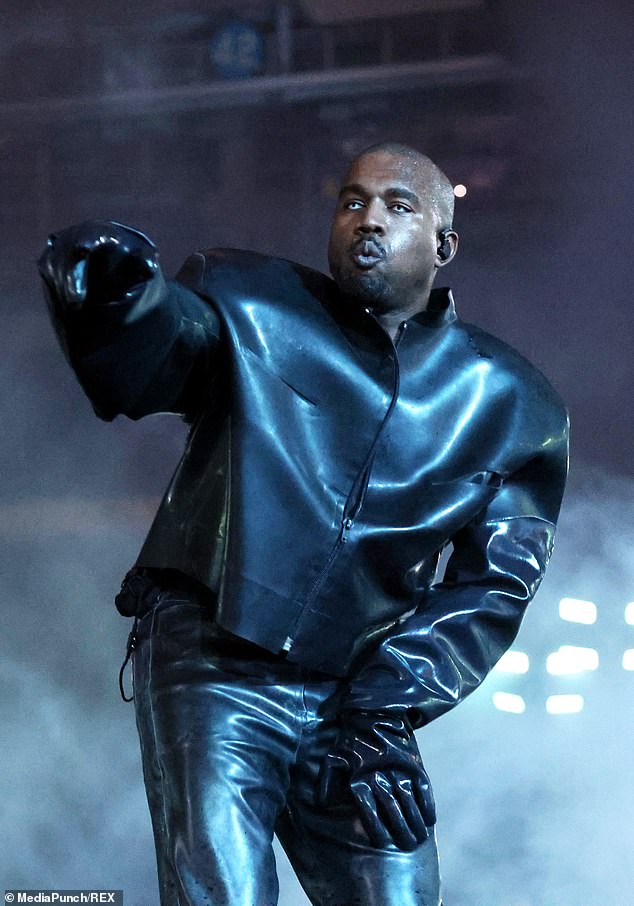 Not scared: A source said: ‘He is almost flattered by it all because it is so ridiculous to him’ and he is ‘not threatened by Kanye in any way, shape or form’ (Kanye is pictured in February 2022)

The Yeezy founder added: ‘Y’all seen that tattoo but if I speak up then I’m crazy. I told you not going to use that one no more when a garbage man goes to work he gonna smell like trash but it’s time to take the trash out the house … You can Google the Hillary thing I’m not making this s * ** up. ‘

He later admitted that his recent behavior towards estranged wife Kim ‘came off’ as him ‘harassing’ the reality star.

In an Instagram post on February 15, the rapper pledged to work on his communication after he posted a series of screenshots that contained threats directed at Pete.

‘I know sharing screen shots was jarring and came off as harassing Kim. I take accountability, ‘the rapper stated in a lengthy mea culpa.

Kim – who filed for divorce from Kanye last year – got one step closer to regaining her freedom amid the contentious divorce when a judge approved her request to be declared legally single last Wednesday.

She has also since removed ‘West’ from all her social media platforms, reverting back to her maiden name. 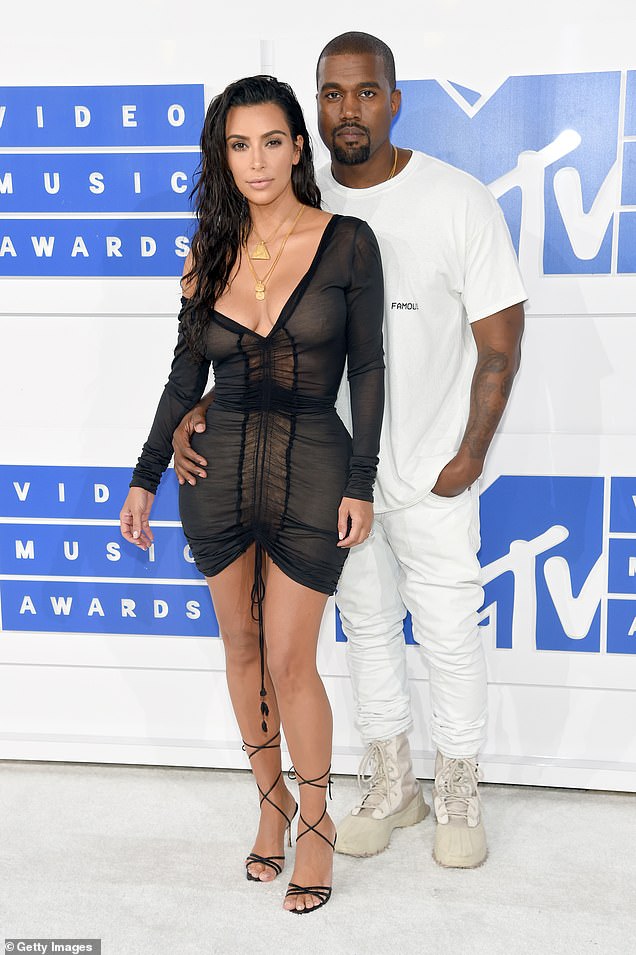 Legally single: Kim filed for divorce from Kanye last year and got her request to be declared legally single approved by a judge last Wednesday; Kim and Kanye pictured in 2016