For many, Helena Morrissey, the mother-of-nine and ennobled City boss, has exemplified the notion of the modern superwoman. But she has now confessed her regret at having helped ‘create the myth that it’s easy for women to have it all’.

In a deeply personal article for the Daily Mail, she wrote about the agonies of going back to work after the birth of each of her children (for her youngest, she only took 11 weeks maternity leave) and how she ‘had this constant nagging feeling my priorities were all wrong ‘.

And yet, she says, she kept up the front, pretended nothing was wrong, ‘doubled down on creating the impression I could “do it all”.

‘Looking back,’ she adds, ‘I wish I hadn’t helped perpetuate this illusion that we can breeze through big life events, such as having a baby or enduring a miscarriage, and carry on as if nothing much has happened.’

For many, Helena Morrissey, the mother-of-nine and ennobled City boss, has exemplified the notion of the modern superwoman

It’s never easy to admit a mistake. It takes courage and self-knowledge. So I am grateful for her candour di lei. But I believe it’s too little, too late. The damage is done. The world has changed irrevocably for women, and no amount of hand-wringing can put the genie back in the bottle.

Morrissey’s mistake was not that she chose to ‘have it all’. It was that she, and many others, sold it so well. They made it look so easy. They highlighted the good bits – financial success, career advancement, being an all-round ‘girl boss’, as my daughter would say – but drew a veil over the realities.

There was a kind of machismo associated with the ‘have-it-all’ culture, one that refused to acknowledge the truth of what it took to keep the show on the road. Not just a selfless, sympathetic husband (Morrissey’s is a retired journalist who was happy to stay at home) but also an army of staff.

For someone like Morrissey on a big salary, none of that was presumably a problem. But for the vast majority of women juggling work and children, it’s not so easy after a day’s work if they have to get the bus home to pick up the kids from school – then make supper and get the house in order.

But thanks to high-profile ‘role models’ like Morrissey, all this is now expected of the rest of us.

As are a million other things.

Being able to ‘snap back’ into our pre-pregnancy shape, to defy aging, retain our enthusiasm for sex when quite honestly we’d rather saw off our own leg.

Or pretending to be fulfilled when there’s not an hour when you’re not doing something for someone else: employer, spouse, child, parent.

And the worst part is, there’s no escape.

The world has changed. Most families need two salaries to be able to put a roof over their heads. The idea that work for a woman is an exciting choice, not an obligation, belongs to another age. In short, women have thrown off their domestic chains only to find themselves shackled to a far more exhausting treadmill. And yet we are still the only ones who can have babies.

Which means that if we choose to have children we’ll be obliged to ‘have it all’, aka work our socks off until we collapse or lose our marbles. No wonder so many young women today are putting off having babies, or deciding not to have them at all.

They’re not stupid. They know what’s in store. They’ve seen my generation’s self-sacrifice on the altar of equality.

True, we changed the world. But perhaps, as Helena Morrissey now admits, not necessarily for the better.

This insults real trans women too

Another example of our two-plus-two-equals-five world. After highlighting the appalling case of a woman raped on a single-sex ward by a trans woman, Baroness Nicholson, right, was told the assault could not have taken place ‘because there was no male on the ward’.

Fortunately, CCTV and witnesses told a different story. Meanwhile, in America, a previously jailed double murderer who ‘recently identified as a woman’ was arrested after a woman’s head was found in his home di lui. I know I should say ‘her’ but I won’t – because men who rape and kill women should not be allowed the final insult of self-identifying as the same sex as their victims.

Yes, some may call me a bigot, but I’m afraid this insanity is in the interests of nobody, not least real trans women who, I’m pretty certain, would not want to be associated with such evil.

The problem with self-identification – as promoted by Nicola Sturgeon and other woke politicians too cowardly to address these difficult and uncomfortable arguments – is that it opens the door to all kinds of abuse that benefits no woman, trans or otherwise.

The Duke and Duchess of Sussex are reportedly being lined up to present the Best Picture Award at next Sunday’s Oscars. Harry has form at such events, having used a Lion King premiere to hawk his wife’s services di lui as a voice-over artist to a Disney boss.

And if The Hair Of The Dog (or whatever that tedious Cumberbatch cowboy film is called) wins, that’s a double whammy as it’s produced by Netflix, which pays the Duke and Duchess zillions. So much more fun (and profitable), wouldn’t you say, than attending Prince Philip’s memorial?

I wonder how the Duchess of Sussex feels about sharing wardrobe choices with a genocidal maniac? I only ask because Her Wokeness was dressed head-to-toe during a visit to New York in clothes by the same Italian brand, Loro Piana, that supplied the £ 10,000 jacket worn by Putin at a Nuremberg-style rally on Friday. Oh dear. Pity the poor stylist who made THAT suggestion. 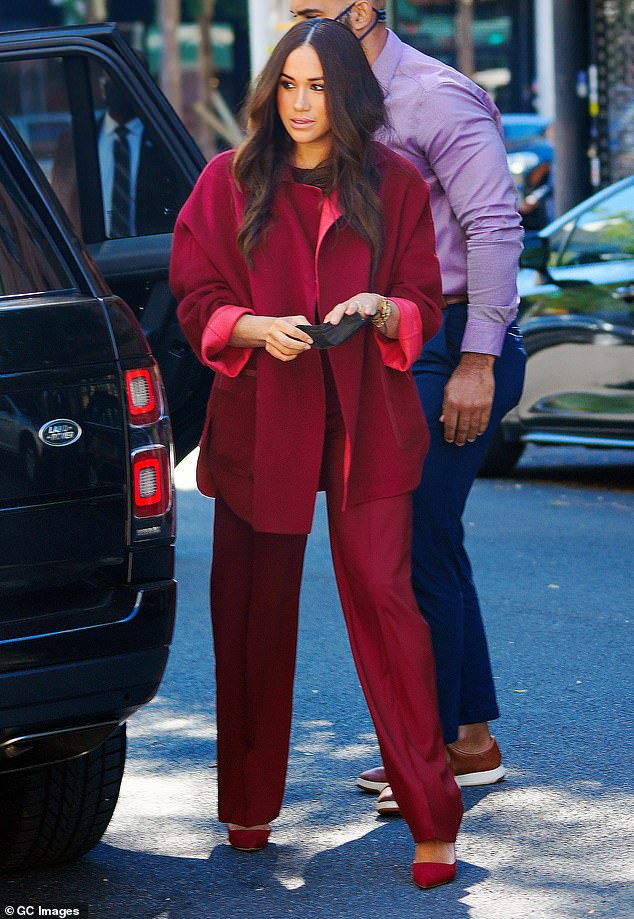 Her Wokeness was dressed head-to-toe during a visit to New York in clothes by the same Italian brand, Loro Piana, that supplied the £ 10,000 jacket worn by Putin

It’s time that Comic Relief abandoned the notion that anything it does is actually funny. It was always tricky interspersing harrowing films about starving children with jolly celebrity skits. But now that the only jokes permissible are ones about straight middle-aged white people, you’re more likely to find a laugh in the letters pages of The Guardian.

Dame Joan Collins had to abandon a dinner at the Arts Club in Chelsea after a drunken diner threw a bread roll at her. She doesn’t have much luck with food. Once, she had supper at my house, and I – thinking I was being frightfully ‘phisticated – served quails’ eggs with the drinks. Unfortunately, in my nervousness at hosting a national treasure, I undercooked them. The soft yolk exploded down her pristine silk shirt di lei. She was, of course, unfailingly polite about it. But she’s never come back.

You have to hand it to Nigel Farage: he’s not short of chutzpah. He’s using a website called Thrillz, which sells personalized video messages from celebrities. For a mere £ 74, Nigel will record a special Mother’s Day message for your mum. ‘It’s universally well known that mums have a thing for me,’ he says, modestly. Children, don’t you dare.

What baffles me about the case of an innocent 15-year-old black schoolgirl who was strip-searched by three police officers on suspicion of possessing cannabis is why they were able to strip-search her in the first place. Surely this should never be allowed to happen to any youngster – black, white or any race. Also, no teacher should have allowed it. It’s a disgrace, too, that the officers remain on active duty, and another stain on the Met’s reputation it can ill-afford.

Not content with churning out special editions of Crocs at £ 450 a pop, once-venerable fashion house Balenciaga has produced a £ 1,000 shopper in the style and shape of a 1980s Tesco carrier bag. I’m sure they think it’s terribly witty and ironic, but I find it not only ugly and a waste of money but also distasteful, especially when many families are struggling to pay for their supermarket shop.

To me, the most horrifying war image was the picture of 109 prams and baby-carriers lined up in Kyiv’s central square. No blood, no dust, no contorted faces – but somehow just as moving. It reminded me of those piles of shoes at Auschwitz. Utterly heartbreaking.

I have a theory. No one can make a fortune like, say, Roman Abramovich’s from scratch without, how can I put this, cutting a few corners. Which is why I hope due diligence has been done on the proposed new boss of the National Lottery, Czech billionaire Karel Komarek.