More than a fifth of homes are being sold within a week of coming onto the market, says Rightmove, as it revealed asking prices had hit anotther record high.

The average asking price of homes newly-listed climbed a further £ 5,760 to £ 354,564 in the month to mid-March, said the property listing website.

Rightmove said the 1.7 per cent monthly rise was the largest at this time of year since March 2004, with an imbalance between buyer demand and supply being the main contributing factor.

In addition, the annual rate of asking price inflation 10.4 per cent is the highest that the property firm has recorded in any month since June 2014.

Rightmove reports that there are now more than twice as many buyers as sellers active in the market, which is the biggest mismatch between supply and demand the company has ever recorded at this time of year.

It said: ‘The speed of the market is further demonstrated by the fact that are there more than one in five (22 per cent) deals being agreed on Rightmove within the first week of being marketed.

‘This is double the figure for the same period in the more normal market of 2019.

‘Almost half, 47%, are having a sale agreed within the first fortnight, another indicator of high demand and the likelihood of finding a buyer quickly.’

The largest monthly price rise was recorded in the ‘top of the ladder’ sector, predominantly comprising properties with four bedroom or more.

However, encouragingly for prospective buyers in this sector, 12 per cent more properties have come to market in the last month compared to the same period a year ago. 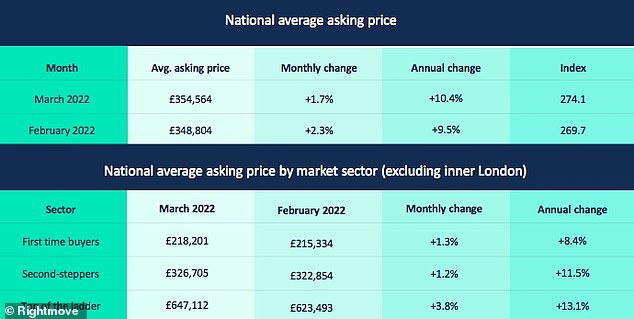 The largest monthly price rise was recorded in the ‘top of the ladder’ sector, predominantly comprising four bedroom or more properties

Commenting on the demand for bigger properties Kate Eales, head of regional agency at Strutt & Parker said: ‘The increase in demand for larger homes is evident as buyers search for more space including room for a home office.

‘The trend of a significant number of people planning to work from home for three days a week or more in the longer term has created new hotspots across the country for part-time commuters including Shropshire, North Cotswolds and Suffolk.’

But it’s the mass-market ‘second-stepper’ sector selling fastest, with just over half (50.3 per cent) of these homes finding a buyer within the first two weeks of coming to market. 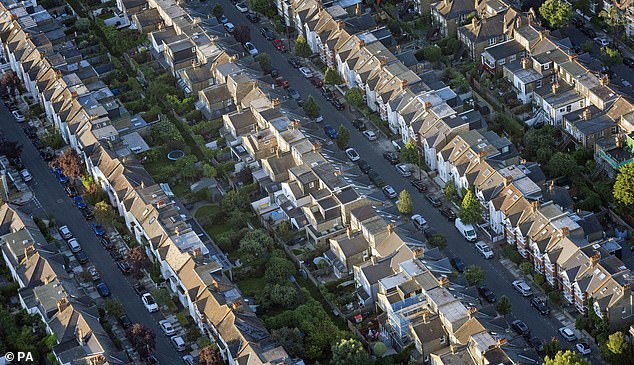 The price of property coming to market has hit a new record high for the second consecutive month, with Rightmove reporting that the national average is now £ 354,564

In terms of regions, the North East saw the biggest price increase for March, with a 3.6 per cent lift taking the average property price to £ 175,749.

Looking at year-over-year growth, the South West saw house prices increase the most with a 14.5 per cent uptick taking the average to £ 369,971, while London prices only increased by 6.3 per cent, reflecting the shift from urban to rural areas during the pandemic.

Rightmove’s director of property data Tim Bannister said that the findings demonstrate an ideal time for ‘home-owners to follow the normal trend and make it their goal to sell this spring’.

He continues: ‘Firstly, the potential to achieve a record price for their property.

‘Secondly, the imbalance between high buyer demand compared to low available property supply is the greatest that we have ever seen for the start of a spring market, meaning that the chance of being able to pick and choose between several suitable buyers is strong.

‘Thirdly, the proportion of properties finding a buyer within the first week is also at an all-time high for this time of year, so sellers with an appropriately priced and well-presented property can expect a shorter marketing period than the norm.

‘Those who weren’t ready to take advantage of last year’s rush now have another chance to get on the market while these conditions last.’

Looking ahead, Bannister says that the supply and demand balance is likely to reach an equilibrium.

The experts also forecast that the transaction numbers for 2022 will revert back to pre-pandemic levels, as the market stabilises.

He concludes: ‘There are headwinds that seem likely to remove the current market froth in the second half of the year. We’ve just seen interest rates rise again, and there are further incremental increases forecast for the year which will raise mortgage rates for some.

‘Inflation and cost of living increases are also likely to affect buyer affordability and market sentiment. It’s too early to know how the UK housing market will be affected by the longer term economic impact of the abhorrent and devastating war in Ukraine, and so all we can use as a measure for now is the level of UK buyer and seller activity. ‘