First of all, an amendment to last week’s article. I put the Ringed Plover as a resident when in fact it is a migrant and winter visitor. The Little Ringed is a resident and not just a summer breeder. Now, recently there have been sightings of Yellow Wagtails on the island, and these characteristic birds can stand out with their bright-yellow plumage, especially when perched amongst the Glassworts or in an open, bare field.

They can also be a bit boisterous when feeding and can sometimes be found in good numbers on migration, sometimes occuring in double figures. They can be seen feeding in open areas of fields and damp areas (Sallinas de Llevante – the salt pans can be a reliable site). They will regularly feed around the feet of livestock as they disturb flies and other insects (the fields at the base of the Boquer Valley and the nearby area called Bee Hive Lane – Llenaire road, are both good feeding areas for them).

The Yellow Wagtail (Motacilla flava) is a passerine in the wagtail family Motacillidae, which also includes pipits and longclaws. Motacilla is the Latin name for the wagtail, and is actually a diminutive of ‘motare’ (to move about). From medieval times, it led to the misunderstanding of ‘cilla’ as ‘tail’. The specific ‘flava’ is Latin for golden-yellow, which is a good compliment to the bird’s overall color I think. In the Pyramid texts found in the old Egyptian kingdom, the Yellow Wagtail was believed to be a representation of Atum, and may have been the first inspiration for the Bennu bird, which is supposed to be the inspiration for the Phoenix (found in Greek mythology ).

This species overall can be quite confusing however, with dozens of sub-species throughout the range, and on Mallorca during migration, the occasional Spanish Yellow Wagtail (Motacilla iberiae) can occur and as does the Blue-headed Wagtail (Motacilla flava). The song of the Yellow Wagtail is a rhythmic series of twittering notes, with the usual call being a shrill ‘pseep’. They are 17cm in length, with a wingspan of 22 – 27cm and a weight of 15 – 20g. Lowland wetlands, especially water meadows, salt marshes, dune slacks and damp fields all form their habitat, where small invertebrates are sought. Adult males have a greenish-yellow mantle, grayish-green wings with whitish-yellow fringes to the coverts and tertials, and a dark-grayish tail with outer feathers. They are the smallest, most compact of the European wagtails, with an almost pipit-like silhouette.

If you (like me), like to try and separate sub-species in the field, then there are some subtle differences in what we can see on Majorca. For example, the Spanish Wagtail (Iberiae race) shows a blue-gray head, a white supercilium (eye stripe), a white throat and black cheeks. The Blue-headed Wagtail (Flava race) shows a blue-gray head, white supercilium and mustache, dark cheeks, and a yellowish throat. I have recorded another sub-species on Majorca (bee hive lane area), called Ashy-headed wagtail (race Cinereocapilla) which shows a blue-gray head, black cheeks and a white throat. But regardless of the race, the Yellow Wagtails are a delightful species to be seen during migration here, and will certainly brighten up the day with their bright eye-catching yellows and characteristic attitude. 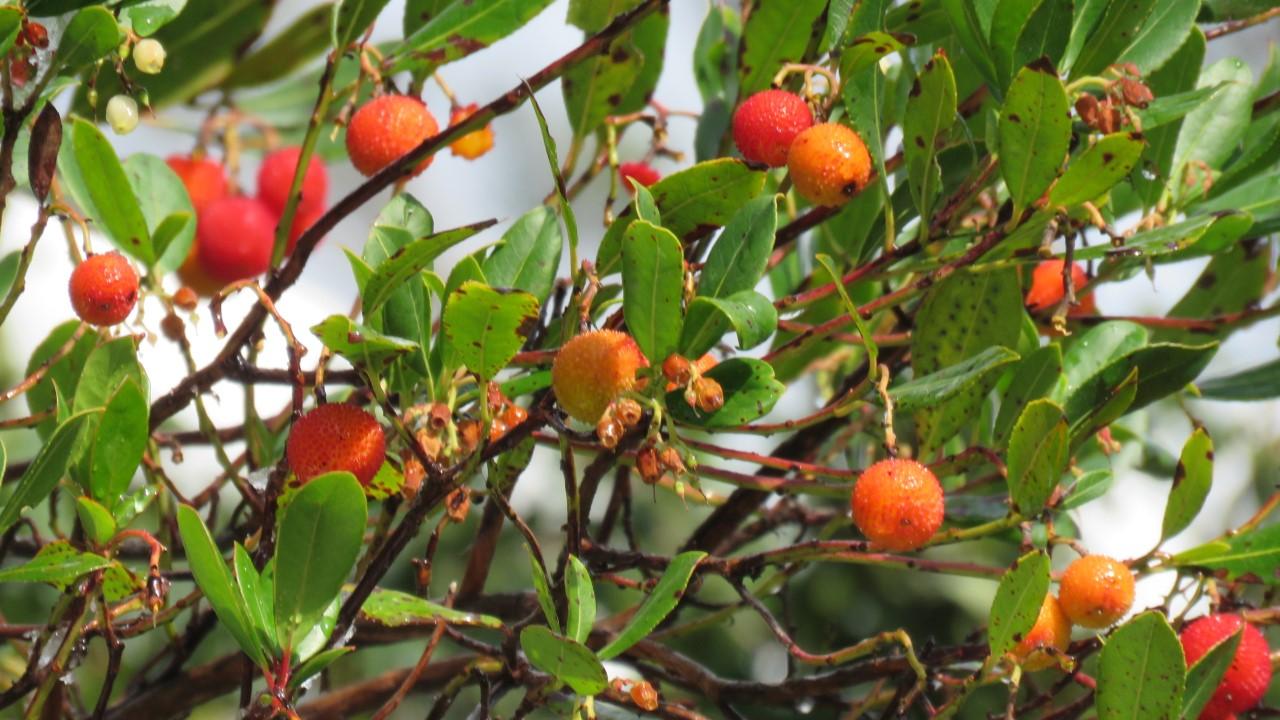 Alaro for me holds fond memories for many reasons, but one particular memory for me was finding my first ever Strawberry Tree (Arbutus unedo) there, which was in fruit, and at the time, was the only color protruding from a blanket of snow that had fallen the night before. Showing well from October through to late March, the attractive, warty fruits turn from yellow to orange, and then to a brilliant strawberry red (hence the trees name). Although they have a bland taste, they are suitable for making jam and even liqueurs or spirits. This evergreen shrub has a matt-brown fissured bark. The lance shaped leaves are shiny and tough, 2 – 3 times as long as they are wide, and green on both sides, with a stalk up to 1cm long. The flowers are urn-shaped, around 9mm in size, with recurved points.

They are quite commonly found growing together with the Mastic Tree, and I also enjoy seeking out other species in the same area, such as the silvery leaves of Bean Trefoil, and a little later in the season, the Tree Heath making an appearance, with those special plants to look out for where the light is sufficient – the orchids, such as Dense Flowered Orchid and Man Orchid – and if I am lucky – the endemic Balearic Cyclamen. The spring equinox will soon be upon us, and soon, nature will be reveling in the warmer weatherwith plenty of fauna and flauna to entertain us all, no matter what our preferences are.