By Sam Greenhill Chief Reporter For The Daily Mail

Prince Andrew will attend Prince Philip’s memorial service next week, it has been confirmed.

The Duke of York is said to be determined to honor his father despite fears his presence could dominate coverage of the event.

Andrew settled the rape case against him by Virginia Roberts in a US court earlier this month, paying her millions. He has always denied the allegations.

Courtiers believe the Duke, 62, will disappear from public life after next week’s event where he is likely to rub shoulders with representatives from charities and organizations with which he has been forced to part ways.

The Queen arranged the service of thanksgiving for the life of her late husband to take place at Westminster Abbey on March 29.

Prince Andrew was seen smiling and laughing yesterday morning as he went out riding at Windsor Great Park.

The Duke of York, who was accompanied by two grooms, has generally been staying away from the public eye after being forced by the Queen to give up all his royal duties in the wake of the Jeffrey Epstein scandal.

He was also not present at Westminster Abbey last week for the Commonwealth Service which was attended by senior royals including Charles, Camilla, William and Kate.

It comes two weeks after Andrew was confirmed to have paid up to £ 12million to his US sex accuser Virginia Roberts, now known as Virginia Giuffre – bringing the civil case against him in New York almost to a close. 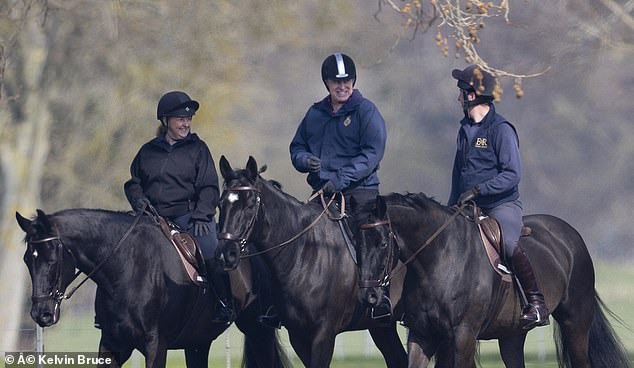 Courtiers believe the Duke, 62, will disappear from public life after next week’s event

‘Stipulation of Dismissal’ documents were filed with a court on March 8, with lawyers on both sides calling for the legal action to be dismissed, indicating the settlement has been paid.

As the order was published, the Treasury confirmed no taxpayer funds were used for either the payment to Virginia Roberts or for the Duke of York’s legal fees.

A freedom of information request asked whether any money from the Sovereign Grant to the Royal Family or any other government money was used. The Treasury insisted: ‘No public money has been used to pay legal or settlement fees.’

The joint order filed with the New York court said each party would pay their own costs and fees.

When Judge Lewis Kaplan signs the order, the civil case will formally come to an end. Andrew has faced repeated calls to confirm how he funded the settlement – and whether the Queen or even Prince Charles contributed.

Reports have suggested they both may have helped Andrew pay or loaned him the money until the sale goes through of a £ 17million Swiss ski chalet he owns with ex-wife, Sarah, Duchess of York.

Mrs Giuffre had sued Andrew for alleged sexual abuse. She claimed he had sex with her when she was 17 after he was trafficked by his friend di lei, the late billionaire paedophile Epstein.

The duke will make a ‘substantial donation’ to a charity for sex abuse victims set up by Mrs Giuffre, now a 38-year-old mother-of-three. He said he now regrets his association of him with Epstein.

Andrew, who was forced to step down from royal duties and public life as a result of the scandal, previously claimed he had no recollection of meeting Mrs Giuffre and has always strongly denied her allegations.

But he agreed to the settlement last month. The prince has been staying away from the public eye but has also been spotted in recent weeks driving his Range Rover in Windsor while wearing white Apple airpods. 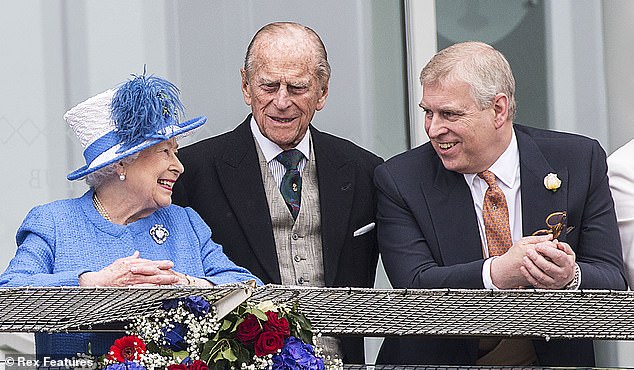 The Duke of York, who was accompanied by two grooms, has not been seen regularly since he stepped down from public life following the Jeffrey Epstein scandal

The Queen wanted the congregation to include family, friends, dignitaries and representatives of the many organizations with which the Duke of Edinburgh was associated.

But Prince Harry will not be in attendance, having declared that he ‘does not feel safe’ visiting Britain without police protection.

Last month there was an extraordinary legal wrangle over the prince’s security when coming to Britain.

He mounted a legal challenge against the Home Office after being told he would no longer be given the ‘same degree’ of personal protective security when visiting from the US, despite claiming he had offered to pay for it himself.