Jacqueline Jossa looked almost unrecognizable as she transformed into Frozen’s Elsa for ITV’s All Star Musicals.

ITV has unveiled first look pictures of all six celebrities taking part in the all-singing all-dancing extravaganza, which will come to screens next month.

In one photograph, presenter Jacqueline, 29, looked elegant in a sky blue one-shoulder gown embellished with an array of sparkling jewels.

The brunette bombshell appeared strikingly different from her normal look as she sported a blonde wig styled into Elsa’s signature plait as she sang her heart out.

Sharing her joy at joining the show, Jacqueline said: ‘I am so excited to take part in All Star Musicals, it’s thrilling and terrifying, and I can’t wait to tackle a musical number that everyone knows and loves.

‘My girls are going to love seeing me up on that stage!’ 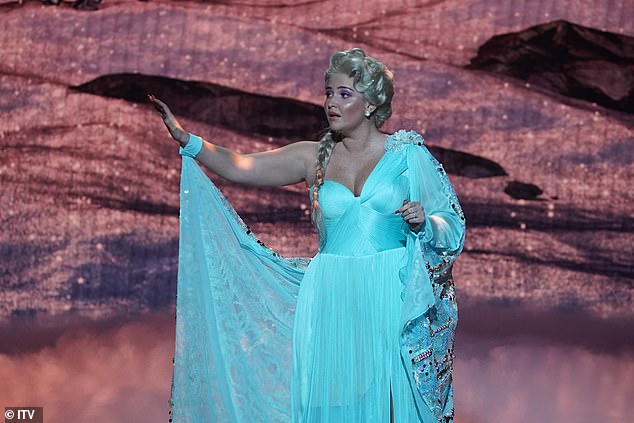 Stunning: The brunette bombshell appeared strikingly different from her normal look as she sported a blonde wig styled into Elsa’s signature plait as she sang her heart out

Judge Samantha Barks said Jacqueline would be one to watch in the upcoming musical special, adding: ‘I am so proud of Jacqueline, she came such a long way from when I first met her to her final performance. ‘

The six famous faces will be flexing their musical muscles and will undergo a musical masterclass as they battle it out to be crowned the All Star Musical’s champion.

Michaela, 55, stunned in a gold and blue tasseled mini dress as she was joined by back up dancers on stage, while sportsman Danny, 35, cut a dapper figure in a rouge suit.

Michaela shared: ‘I am a huge fan of Musical Theater so am super excited to be involved in ASM. 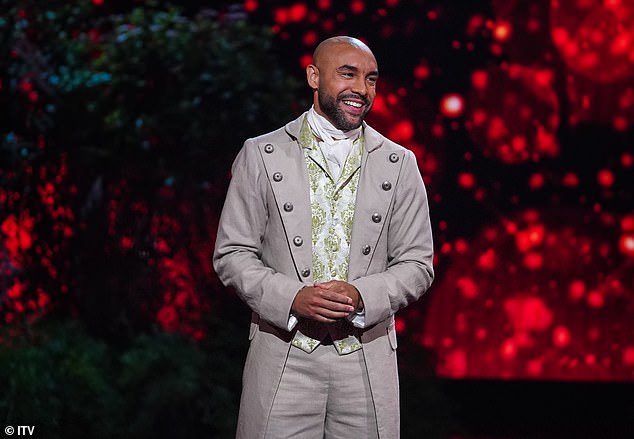 Exciting: ITV unveiled first look pictures of all six celebrities taking part in the all-singing all-dancing extravaganza, which will come to screens next month, including Alex Beresford 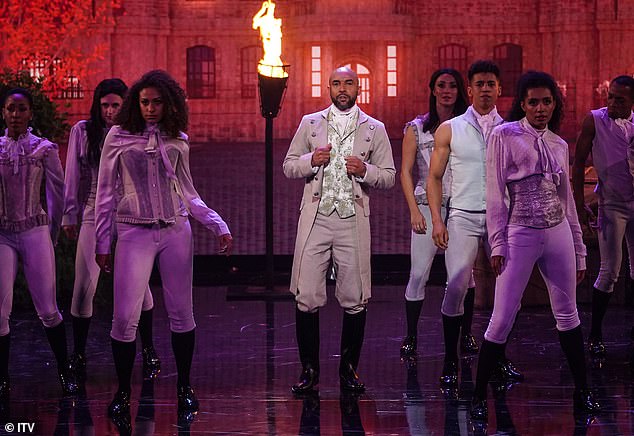 ‘As a wildlife presenter, I don’t often get the chance to swap the walking boots and outdoor gear for something sparkly! I’m attempting to do something I haven’t done for over 30 years, spoiler alert, it’s not the can can! ‘

Actor Colin, 59, raised a glass as he took to the stage for his musical number, which appeared to be from Les Misérables, while soap star Lisa, 49, was unrecognisable in a short black wig.

Speaking of the show, Lisa said: ‘ASM is a dream for me, both professionally and personally. The team have been so supportive and nurturing and I can’t wait to take to the stage. ‘

And Colin said it was ‘so much fun learning to master the Master’, with Danny Care adding that he was ‘really excited to be doing something completely different and out of my comfort zone’.

The group will be in good hands on the show as they’ll be mentored by musical theater superstars Elaine Paige OBE, Samantha Barks (Frozen, Les Miserables) and Trevor Dion Nicholas (Hamilton, Aladdin). 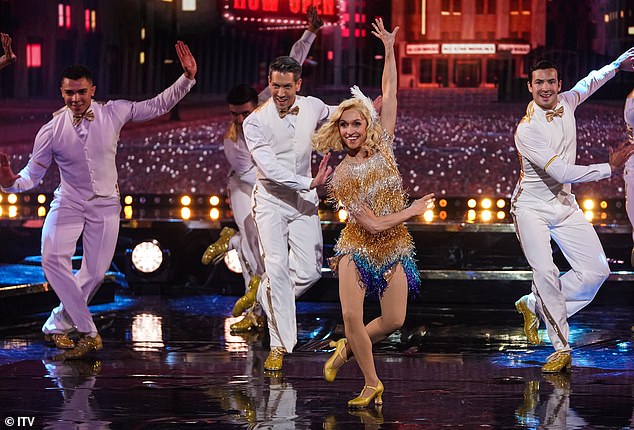 Theater: Michaela Strachan, 55, stunned in a gold and blue tasseled mini dress as she was joined by back up dancers on stage 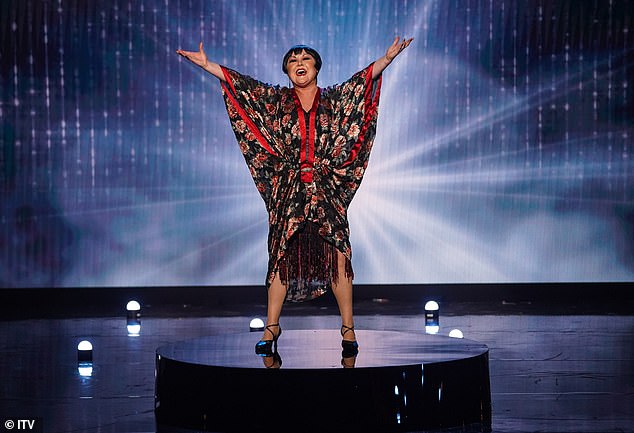 The celebrities will also be supported by a full West End ensemble and a live orchestra.

Not only that, but the cast will receive training from esteemed West End choreographers and vocal coaches in the lead-up to their performances.

Speaking about the second special, returning host John Barrowman said there will be a number from Les Misérables, a song from 42nd street and a hit track from Chicago among the performances.

He added: ‘The second installation is going to be a roller-coaster whirlwind ride of big performances, subtle performances but all of them you need to know will entail singing, dancing and acting. 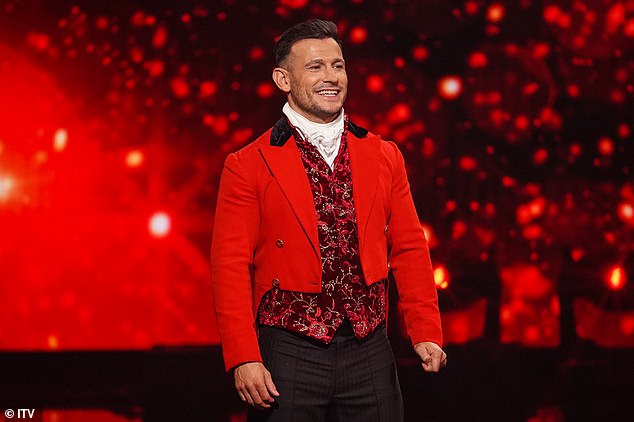 Challenge: The six famous faces, including rugby star Danny Care, will be flexing their musical muscles as they battle it out to be crowned the All Star Musical’s champion 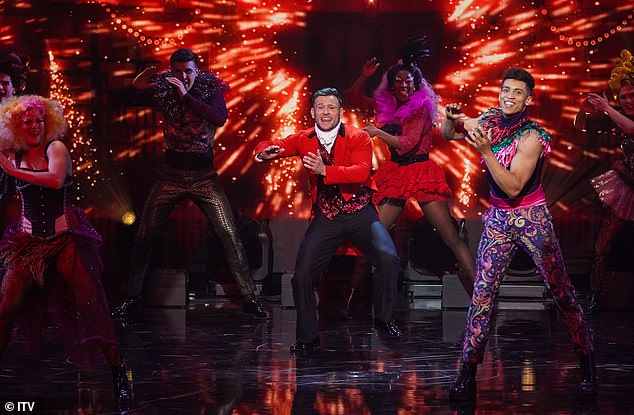 All-dancing: Sportsman Danny gave it his all as he took to stage alongside back-up dancers

‘We get to see who is a real triple threat in this show and some who are only a double threat!’

John, 55, said Queen of the Jungle Jacqueline surprised everyone because ‘who knew she could sing’ while Alex ‘shows us a side we never knew was there’.

Speaking about the much-anticipated group number, the Doctor Who star said viewers would be taken back to a 1950s high school for the performance as he said people should call the ‘pink ladies’ – teasing at a number from Grease.

Meanwhile, judge Samantha said she thought that GMB’s Alex had picked the most challenging musical number, before she admitted she had a ‘vested interest’ in his performance after mentoring him. 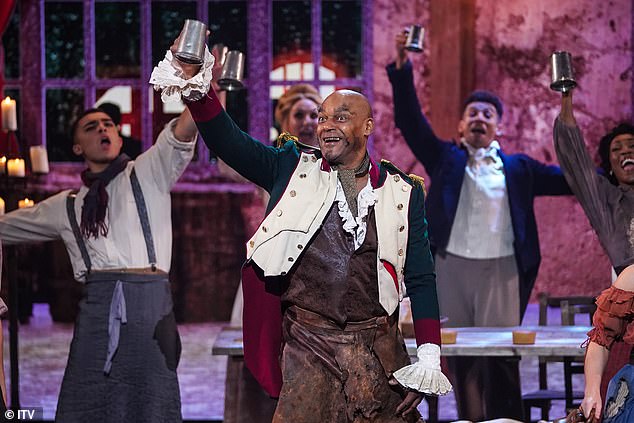 Musicals: James Bond actor Colin Salmon raised a glass as he took to the stage for his number, which appeared to be from Les Misérables

She added: ‘The song he has picked is a beast. It’s a lot of words, it’s a lot to carry across and it’s an easy one to be overwhelmed by and so I think that this is another point of excitement for me to see that go down. ‘

She said following her win: ‘Thank you so much and thank you to everyone. Everyone has worked so hard so this is for everyone. The tuition Elaine gave me, I will keep with me forever. ‘ 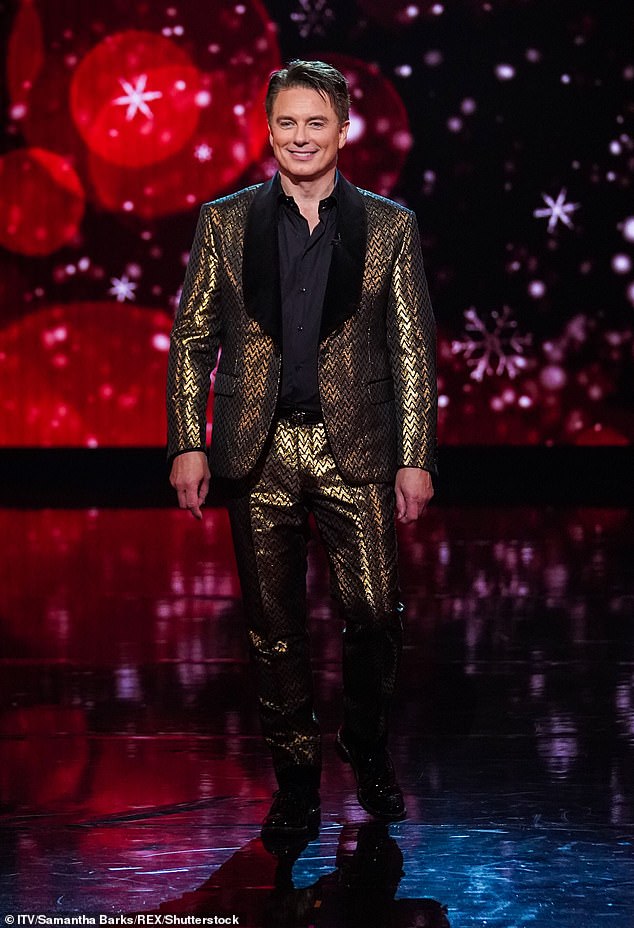 Back on screens: The program will be presented by returning host John Barrowman