The average UK house price in January was £ 24,000 higher than the year before, figures from the record-breaking property market show – amid concerns by experts of an over-valuation.

Annual house price growth eased slightly to 9.6 per cent in the first month of 2022, from 10 per cent in December, according to the Office for National Statistics (ONS).

But prices are still significantly up on pre-pandemic levels, with people in some areas needing around 36 times their annual earnings to buy a home.

It comes as the average asking price of homes newly-listed climbed a further £ 5,760 to £ 354,564 in the month to mid-March, according to Rightmove.

The property listing website said the 1.7 per cent rise was the largest at this time of year since March 2004, with an imbalance between buyer demand and supply being the main contributing factor.

The average UK house price in January was £ 24,000 higher than the year before, figures from the record-breaking property market show – amid concerns by experts of an over-valuation 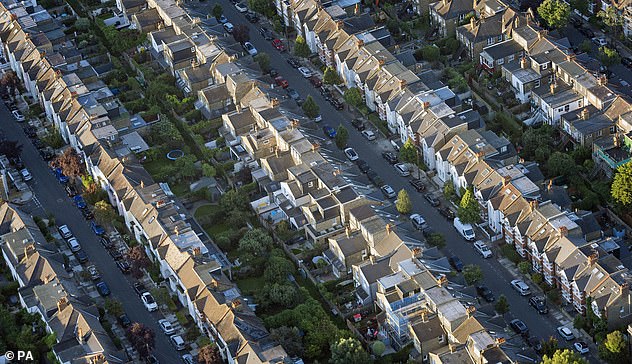 Prices are significantly up on pre-pandemic levels, with people in some areas needing around 36 times their annual earnings to buy a home

The ONS said typical house prices across England and Wales are now at record levels. The average house price in Scotland is now at similar levels to a peak seen in November 2021, it added.

Lawrence Bowles, director of research at property group Savills, said: ‘By way of context, median annual earnings were £ 31,285 in 2021. This means that the increase in value of the average home was 77 per cent of total average gross earnings.’

In the London borough of Kensington and Chelsea, someone would have typically needed 36-and-a-half times the average salary to buy a home last year.

But amid reports of steady growth in the property market, experts have suggested that house prices in London are overvalued by as much as 50 per cent. 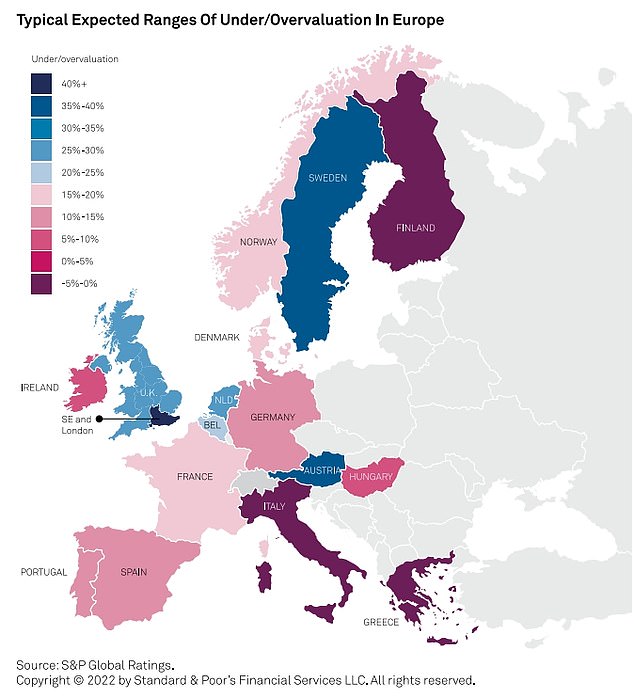 Experts at S&P Global Ratings have suggested that house prices in London are overvalued by as much as 50 per cent, raising fears of a looming correction in the market

S&P Global Ratings, part of financial information company Standard and Poor’s, have raised fears of a looming correction in the market.

Alastair Bigley, a researcher for the agency, warned that prices were likely to fall.

‘A combination of low rates, the stamp duty holiday and excess savings amid the pandemic have driven property prices higher, particularly in London and the South East where overvaluation relative to income over the long-term is as much as 50pc,’ he said.

‘We expect a greater correction in property prices in an overvalued market.’

Mr Bigley said that house price rises were ‘a consistent trend’ across the pandemic, which was not initially noticed due to the disruption to the international economy. Prices had also risen sharply across Europe since the pandemic began. 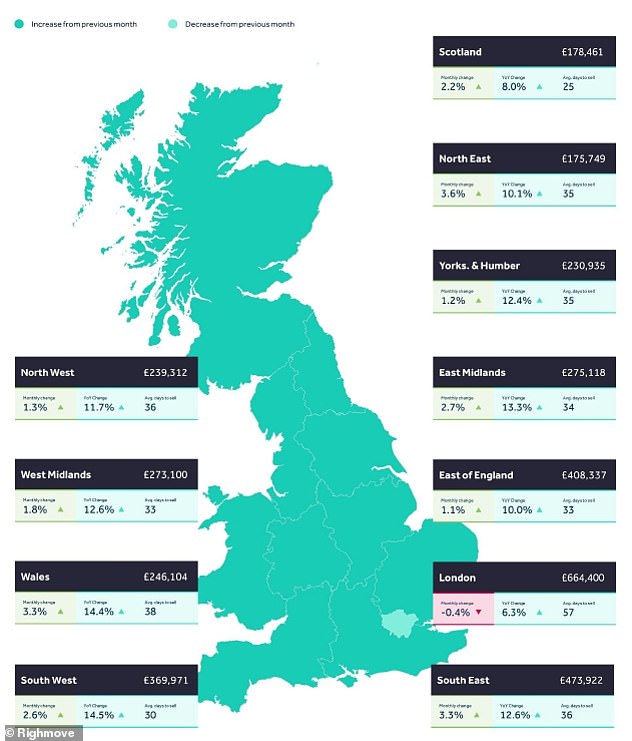 The overvaluation did not necessarily affect home owners because higher prices gave them more equity and had minimized defaults.

The news comes as Chancellor Rishi Sunak delivers his amended spring statement which included relief in National Insurance and a fuel duty cut to offset the impacts of the cost of living crisis.

A separate ONS report showed how the wider living costs crisis is tightening its grip, with UK inflation soaring to a new 30-year high in February.

Consumer Prices Index (CPI) inflation rose to 6.2 per cent in February, up from 5.5 per cent in January, sitting at the highest level since March 1992, when it stood at 7.1 per cent.

The ONS also produced figures indicating how housing affordability has worsened during the pandemic, with house prices having hit a string of record highs.

In England last year, full-time employees could typically expect to spend around 9.1 times their workplace-based annual earnings on buying a home, compared with 7.9 times their earnings in 2020, the ONS said.

In Wales last year, full-time employees could typically expect spend around 6.4 times their earnings on purchasing a home, up from 5.8 times their wage in 2020.

Copeland in the north-west of England remained the most affordable local authority in England and Wales in 2021. Average house prices there were 2.7 times the average workplace-based annual earnings.

Kensington and Chelsea in London remained the least affordable local authority across England and Wales in 2021.

Someone living there would typically have to produce 36.5 times average annual earnings to buy a property, the ONS said.