Germinal, the novel by Émile Zola, is centered around a coalminers’ strike in northern France in the 1860s. Considered a masterpiece, it has such resonance in France that it has already seen five film adaptations and two television productions.

The latest is a mini-series produced for France Télévisions, Salto and Italian channel Rai by Banijay Studios France. To bring this version of the tale to the screen, director David Hourrègue and cinematographer Xavier Dolléans had an ambitious vision for the period drama – including a “visual approach to carry the spirit and magnitude of this social upheaval against the establishment” – and some unique approaches to deliver it.

Hourrègue and Dolléans had been working together on the long-running French TV series Skam France when the offer to make Germinal came in.

“They offered it to us at the end of 2019 when we were in the last part of shooting Skam season six, ”says Dolléans. “[Germinal] was the project we had been waiting for: a TV series with six episodes of 52 minutes, and at € 12 million the biggest budget you can have on this kind of TV show in France. Although we were a young team, not very used to projects of that size, we chose to do it very quickly. “

“The revolution is ’emerging’ from the darkness of the mine. We had this idea of ​​using shades of blacks, to give the darkness a palette, ”Xavier Dolléans

At the same time, the team was aware that it was a big ask; for one thing, finding a colliery location would be a challenge – as Dolléans says, “there are no such mines left in France in which we could shoot”. 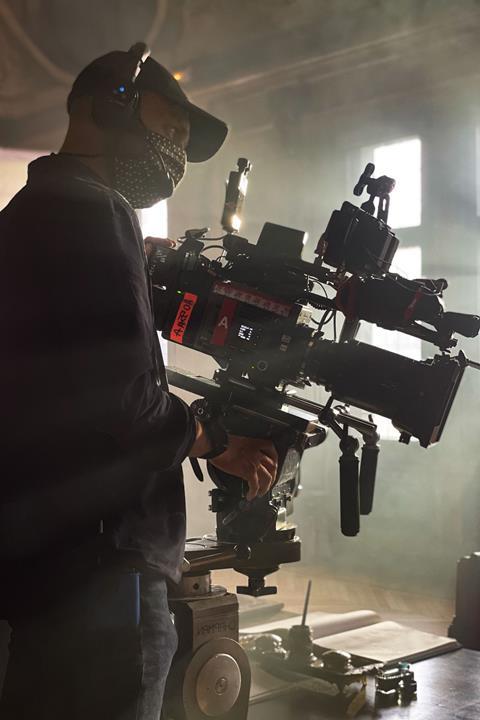 “We would have to reconstruct the mines in the studio,” he adds. “This is not usual for a TV show; it’s more [common] for features. It needs a big budget and we had to convince the producer, but we knew that we would have to do this if we wanted to shoot Germinal faithfully. “

“In episodes five and six, there is sabotage and the mine is flooded,” says Dolléans. “We had [access to] a small water tank, but we didn’t have the kind of large aquatic studios in France that would be required. “

Lites Studios in Brussels was considered as a solution. “This studio is unique in Europe, you have a grid suspended by wires, you construct your set on this grid and then you can take it down into the water,” says Dolléans.

Filmmakers can change the height of the set and so the depth of the water, “a perfect setup” for Germinalas various scenes involved first five, then 50cm of water, a fight that takes place in a meter depth, and by the end of the story a flooded mine under two meters of water. 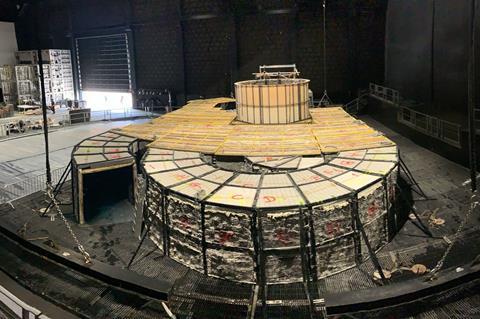 “It’s a beautiful set in Belgium, the water is at 30 degrees and is safe for electricity,” says Dolléans. “But we had to run experiments and try to convince the producer at the same time; nobody had done this on this scale for a TV show in France before. “

With the studio approach approved and the decision taken to acquire anamorphic 4K for an aspect ratio of 2.40: 1, Dolléans shot multiple cameras and lens tests in preparation during August 2020.

The Sony CineAlta Venice in its native Super35 mode was chosen for much of the shoot. 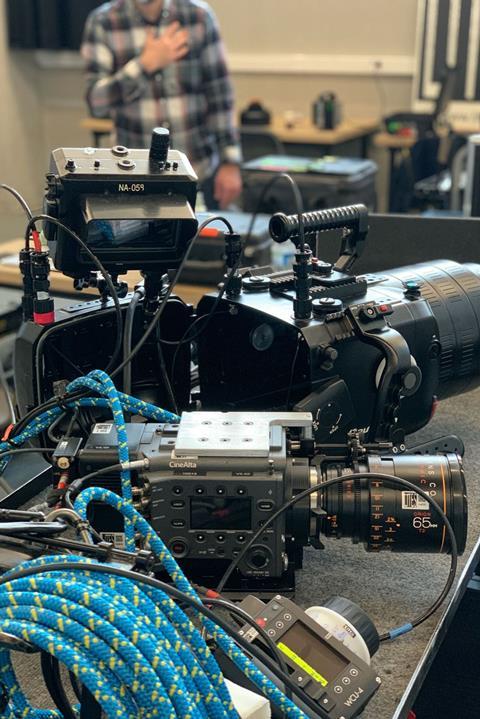 “We had so many setups to think about – such as on a Ronin [stabilisation system] and underwater. I made a few tests shooting with cameras side by side and [Sony Venice] was the big winner, ”says Dolléans.

Atlas Orion anamorphic lenses were another choice. “I tested around 25 sets of lenses; we wanted some that ticked all the boxes. We shot Skam seasons five and six with Atlas Orion lenses, but I wanted to test everything before deciding to go with them. “

Sony’s Rialto extension system came in handy for shooting in tight spaces, as it allows the image block of the Sony Venice to be detached.

The Blackmagic Ursa Mini Pro 12K was also used, deployed for key VFX shots. “Filming took place between October and December, and involved many extras, which presented a number of logistical challenges for us,” recalls Dolléans. “Practical decisions had to be made around which aspects of the set design would be built versus those we could achieve in VFX.

“[The Ursa] wasn’t integrated into principal photography, but I used it every time I needed to give something to the VFX team. I shot many plates and elements in 12K – such as the mountain of coal and other elements including the church, houses and clouds, ”adds Dolléans. “It was interesting to use this camera to give them very high-definition background elements to integrate into all the VFX work.”

In common with many high-end film projects, Dolléans and Hourrègue built a mood board for Germinal. There are a lot of references from westerns and period features, as well as vintage photos of European mines. 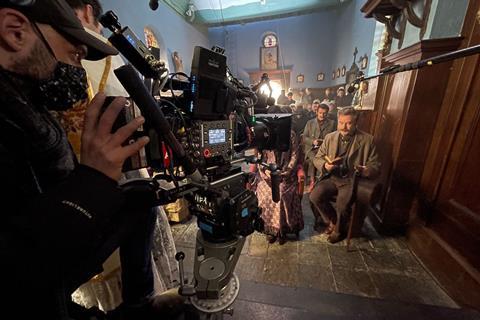 “Michael Cimino’s Heaven’s Gate (1980) was a big reference for lighting, for framing, [the look of] the countryside and more, ”Dolléans reveals. This includes big skies, backlights and silhouetted figures. The township streets of Django Unchained (2012) and Open Range (2003) are also influential.

With red brick buildings, smoky streets and an end of the 19th-century vibe, another reference is Peaky Blinders, particularly the sense of ‘amplified realism’ created through its use of background plates as set extensions.

“We wanted the LUT to have a creative intention, interpret the color and have a strong contrast like the film stock,” Florine Bel

Another reference for Dolléans was the use of black in modern painting. “The revolution is ’emerging’ from the darkness of the mine. We had this idea of ​​using shades of blacks, to give the darkness a kind of palette, ”he says. “The Venice was the perfect camera to do this.” 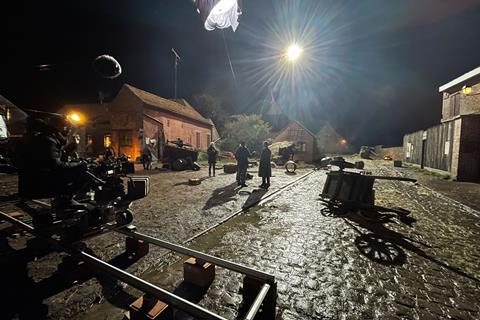 Dolléans and Hourrègue wanted to ease in the relationship to coal in an artistic way, desiring “a visual treatment using brightness and chiaroscuro, on faces and bodies as well as on the pit walls”.

Thus, shots of people and interiors in the mine and workers’ dwellings – known by the French term coron – use a lot of contrast. The bourgeois world of the mine-owners is the polar opposite. The “diversity, different castes, the richness of materials and textures, and the homes conducive to the entry of light” in this world, all provide contrast with the lives of the colliery workers.

Light in the dark

The concept of a black palette led to a specific high contrast LUT being developed especially for Germinal. Inspired by the monochrome photography of Sebastião Salgado and having tracked down the Kodak TRI X 320 film stock the photographer was known to use, Dolléans wanted to add a similar filmic character to Germinal. 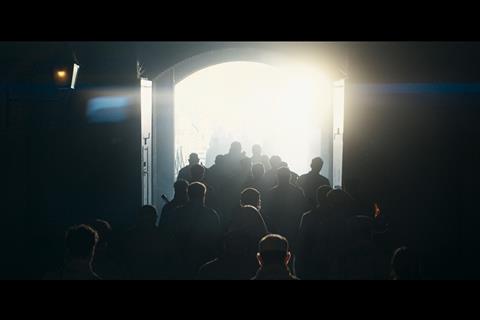 “I’m used to creating looks together with my colorist Karim El Katari, who introduced me to color scientist Florine Bel,” recalls Dolléans.

“The main thing when you develop a LUT is to know clearly what you want to do,” explains Bel. “Xavier showed me a LUT he found interesting and also the contrast of the Kodak TRI X 320 film stock. We wanted the LUT to have a creative intention, interpret the color and have a strong contrast like some film stock can exhibit. But it couldn’t be too strong and limit what the colors can do.

“I created the LUT using several grading tools and color conversions to design every part of the RGB cube,” Bel continues. “I tested the impact of the LUT on [a lot of] test footage to make sure it impacted the image as expected and gave a good creative direction. The challenge was to keep a good representation of each color even if the overall look is very low saturation. “ 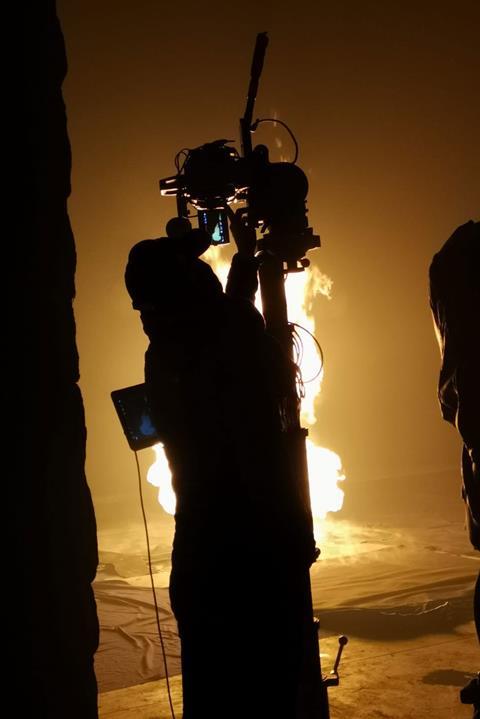 El Katari (grading on DaVinci Resolve) was working in the ACES 1.1 color management workflow, and an ACES Look Modification Transform (LMT) was applied to both the Sony Venice and Blackmagic Design Ursa. Bel was able to combine the new LUT with the output process of ACES so it could work on SDR and HDR displays to give the filmmakers a working preview of the final look of Germinal.

“The LUT was built before shooting, it was used on monitors on set and applied on [all the] dailies. We could verify if it was providing the expected result or think about some improvement for new versions, ”Bel explains. “In the end, we had two LUTs, one with more detail in the shadows for scenes in the mine.”

This provided Dolléans with the contrast of TRI X 320 film in the ACES color space, converted for on-set monitoring.

“This saved a lot of time as everybody was already used to the contrast,” he says. “You couldn’t shoot and then put this look on Germinal – you would have to have a crazy discussion with everybody. But when you apply it at the beginning, everybody’s used to it. So that was a tremendous experience on this project. “

“The same LUTs were used by the colourist,” says Bel. “With ACES, all cameras can be brought into the same color space, so it’s easy to grade. To have a better match between Venice and Blackmagic Ursa, we created a second LMT for the Ursa that was applied at the start of the grade. “

“The color integration was seamless because of Florine’s work,” says Dolléans.

Every TV drama these days has a lot of visual effects – there were more than 200 VFX shots in the first episode of Germinal alone – and Dolléans worked closely with studio Digital District. “We involved the VFX team at the very start; we showed them the mood board and sequences, so everything was very clear at the beginning, ”says Dolleans. “It was non-stop working with them, through previs, and a lot of work was done with the VFX supervisor on set.” 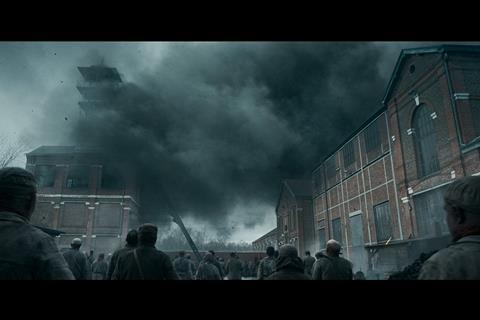 Some sequences had issues with lighting continuity, so Dolléans had the idea of ​​using Luminar image processing software to solve it. “The Luminar AI version has a very good plug-in for sky replacement, so I took some still captures of the shoot and tried adding some big clouds into those different sequences. I showed it to the director [who agreed] and then we used VFX to add clouds to around ten sequences. “

For a scene where the mine is exploding, Dolléans used the Blackmagic Design Ursa to shoot 10m-high flames in a black studio, for the VFX team to then integrate.

“I shot with the Ursa on the side, to give it a vertical flame, and therefore delivering 12K vertical resolution flames, or at 8K on high frame rate,” he says. 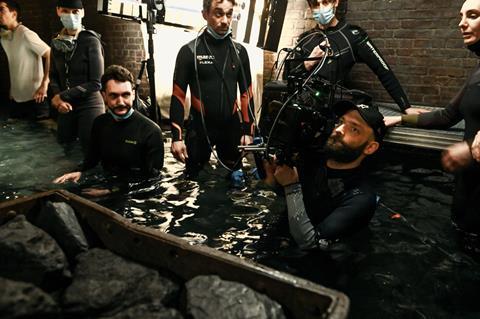 “Working with all that resolution allowed us to zoom in considerably without any loss of detail or quality,” says VFX Supervisor Arnaud Leviez. “We shot the mine explosion sequence in several passes: the actors in the mine corridors were wired to be able to eject them and simulate the explosion’s blast; then a horse carrying coal inside the mine; and finally explosion effects shot on a black background in 12K. In compositing, we then put these three elements together. We zoomed in and magnified the explosion, putting audiences at the heart of the flames. “

The finished VFX shots were supplied to Deflight Postproduction, which completed the grade online with DaVinci Resolve.

“When the shoot ended at the beginning of March 2021, we started to have very regular meetings with the VFX team – we were checking the VFX every day during the post-production process,” says Dolléans.

“[Germinal] was like a big family, everybody was involved. “