New York-based website BuzzFeed is gutting its news division at the digital media company amid reports shareholders have urged Founder and CEO Jonah Peretti to shut it down entirely.

The newsroom, which reportedly loses Buzzfeed about $ 10million a year, is offering voluntary buyouts, while some top editors are leaving, CNBC reports. Several key shareholders have told founder and CEO Jonah Peretti to shut down the entire news operation.

The departures includes Mark Schoofs, the editor in chief of BuzzFeed News, and deputy editor in chief Tom Namako, who announced a move to NBC News Digital on Tuesday. Ariel Kaminer, the executive editor for investigations, is also leaving.

On BuzzFeed’s earnings call Tuesday, CEO Jonah Peretti said the company is accelerating its investment in vertical video popular on apps like TikTok.

But things were less cordial in a meeting that was recorded and leaked to Business Insider, where Peretti took a more realistic approach with what was happening to his news division.

By the time staffers were allowed to ask questions, multiple reporters said that Peretti had already left the meeting.

Founder and CEO of BuzzFeed Jonah H. Peretti speaks at the Nasdaq in December of 2021 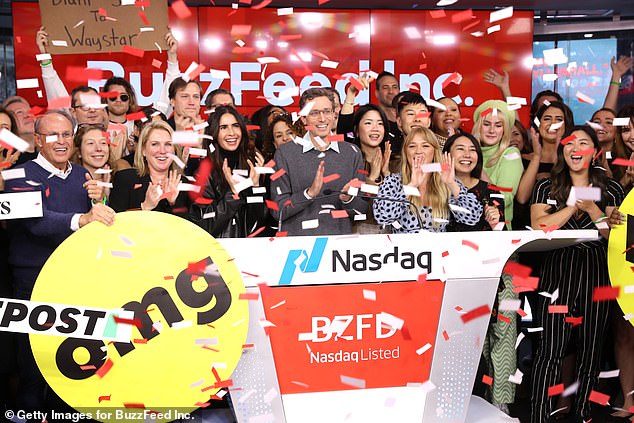 The New York-based Buzzfeed is offering voluntary buyouts in its high-profile, 100-person newsroom and some top editors are leaving 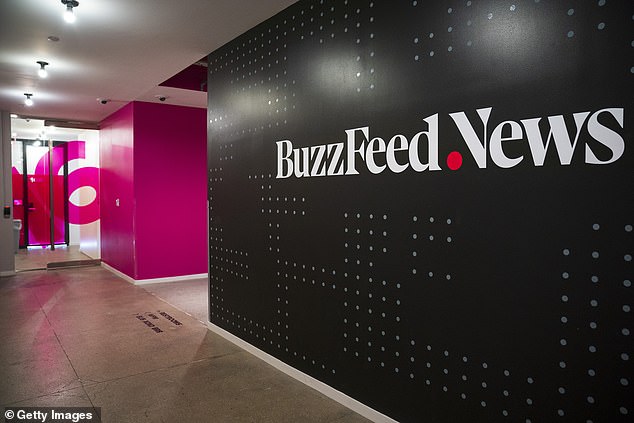 A BuzzFeed News logo adorns a wall inside BuzzFeed headquarters. The media and news company was founded in 2006

The didn’t stop staffers from unleashing on the remaining executives who were in the meeting.

‘This is the exact opposite of the message we got from Mark [Schoofs], ‘one employee said. ‘We have been pushed toward longer form, less reactive news for two years, and now I’m hearing the exact opposite. I don’t understand beyond the shareholders not liking news what the real problem is here. ‘

Another noted Peretti’s absence at the Q&A: ‘This is very frustrating, and it’s very rude that Jonah left,’ said another employee. ‘It’s f – king disrespectful. All of this is really disheartening and hurtful. This is why we have a f – king union. You can’t just treat people like this. ‘

Another staffer had similar concerns: ‘To be told by Jonah – who has now left the meeting, which everyone is obviously really upset about – that he’s not going to subsidize us as if we’re a charity case in this company, is insulting. Morale is such a problem. ‘

Samantha Henig, Buzzfeed’s VP of News Strategy & Operations, said that they have to balance journalism with making a profit.

‘We’re faced right now with a decision about how to continue to serve our audience, do great journalism that makes the world better, and do it within a business model that lets us cover our costs now so that we can continue to grow and invest in the future, ‘Henig said.

As for the news division, it ‘will need to get smaller,’ and ‘prioritize the areas of coverage our audience connects with most,’ Peretti said in a memo to employees.

On the earnings call, he said that the company needs to make BuzzFeed News’ a stronger financial contributor to the larger business, ‘and doing so will involve focusing on big breaking news, culture and entertainment, celebrities, and’ life on the internet. ‘

Peretti said the strategy will now be ‘the biggest news and scoops of the day, the best coverage of the internet, culture, our own lives, our health, and faster investigations,’ according to the audio.

‘I’m no longer going to subsidize [the news division] with revenue from other divisions, and that’s a change from the past, ‘he added. ‘We did that for many years, but now we need to transform news into a sustainable business.’

BuzzFeed News is unprofitable but has won awards, including its first Pulitzer last year, and its staff has been regularly poached by traditional news organizations.

A spokesman for the outlet, Matt Mittenthal, said about 35 people were eligible for the buyouts, but the company doesn’t expect all of them to take one.

Multiple executives on the call were hoping to avoid layoffs and hoped the voluntary buyouts would save enough money to avoid them.

Buyouts will be offered to news staffers on the investigations, inequality, politics and science teams, as BuzzFeed focuses more on big breaking news and lighter content. 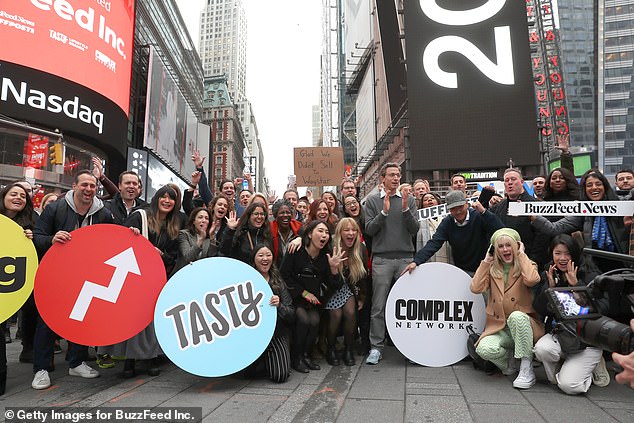 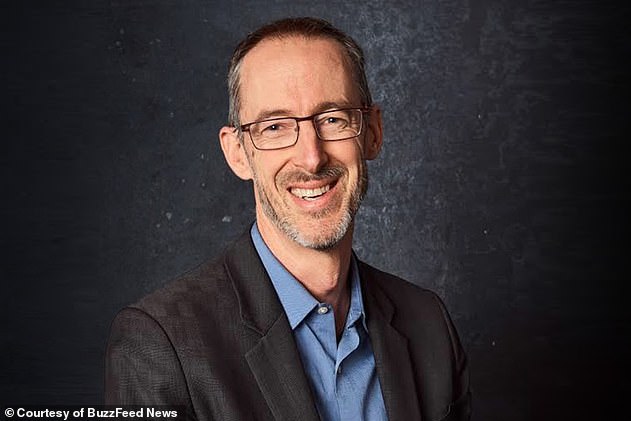 Mark Schoofs, the editor in chief of BuzzFeed News announced his departure ahead of cuts to the newsroom 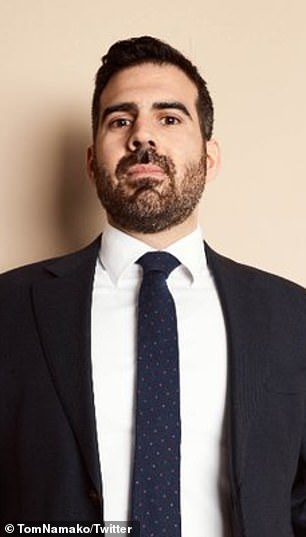 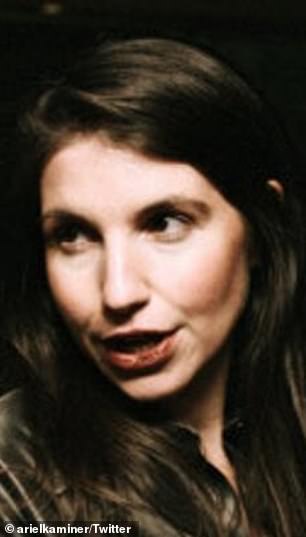 Rosalind Adams, an investigative reporter at BuzzFeed News, tweeted: ‘We’ve had freedom to chase wild, impossible stories. It’s a sad day to watch @BuzzFeedNews move away from valuing that work. ‘

Beyond the newsroom buyouts, the company also said it is cutting 1.7 percent of its staff.

In a January filing with securities regulators, Buzzfeed said it had 1,524 US and international employees, so the cuts would amount to roughly 25 people.

BuzzFeed’s shares have dropped more than 40 percent since the company went public in early December via what’s known as a SPAC, merging with a company that already trades, rather than an IPO.

The company had a solid year in 2021, it reported Tuesday in its earnings release. Its revenue rose 24 percent to $ 397.6 million, thanks to increases in e-commerce and ad revenue, and its profit more than doubled, to $ 25.9million. 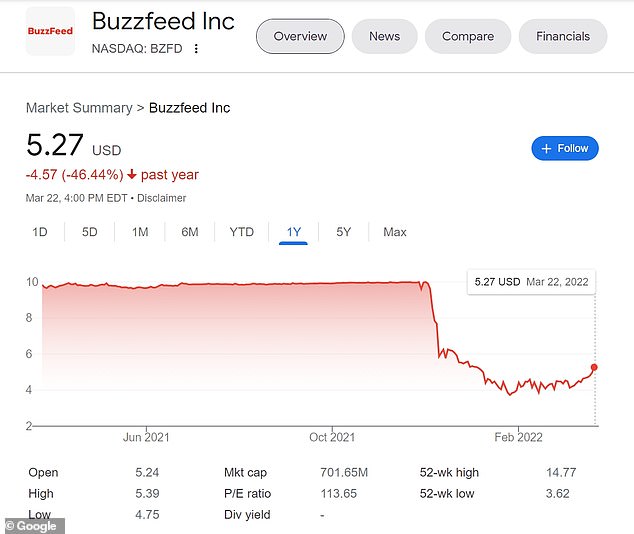 But it expects revenue to drop in the current quarter if it includes the acquisition of Complex Networks, a group of pop culture sites BuzzFeed acquired last year.

The layoffs separate from the news division will come from BuzzFeed Video and the editorial side of Complex.

BuzzFeed also acquired HuffPost in early 2021, and laid off several dozen of its staffers shortly after.

The last direct layoffs of Buzzfeed staffers came in July of 2020, when the company laid off 70 percent of its furloughed workers.