By Tom Pyman and Chay Quinn For MailOnline

Do you know who the passenger is?

Get in touch: [email protected]

A violent passenger who kicked off on a flight back to Turkey after becoming annoyed by crying babies also tried to open the door while the plane was in the air, a fellow traveler has claimed.

The female flyer became unruly around halfway through the scheduled four-and-a-half hour journey from Manchester to Antalya on Monday and was so disruptive she caused a diversion to Vienna.

Shocking video footage emerged earlier this week of her squaring up to Jet2 cabin crew staff, while witnesses reported her slapping other passengers on board.

Now, another woman who was on the same flight has revealed more about the confrontation.

Samantha Fearon, from Littleborough, Greater Manchester, told Yorkshire Live she believed the sound of young children crying and fellow holidaymakers ‘looking at her funny’ had sparked the violence.

Samantha admitted that she was worried and feared for her own life when the passenger took such drastic action.

‘My first thought was’ why did I pick the seat at the front – I am going to go out of the door first’. That did worry me. ‘ 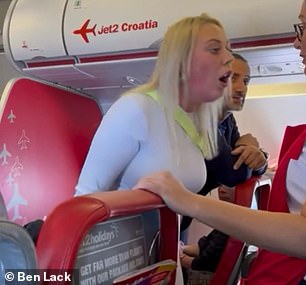 The flight had to be diverted to the Austrian capital so the woman could be removed, arriving at 11.40am before carrying on to reach Antalya two hours later than scheduled.

Another passenger onboard the plane previously told the Manchester Evening News that a female passenger became disruptive ‘about an hour and 20 minutes’ into the flight.

‘There was lots of noise,’ the passenger, who asked not to be identified, said.

‘Then she came to the front of the plane. She was really angry towards Jet2 staff and she wouldn’t calm down. Her voice di lei was getting louder and more aggressive-she was shouting in people’s faces.

‘People were saying she was kicking off at the airport before she even got on the plane. Then some people said it was over babies crying on the flight.

‘A customer said something and she slapped him in the face. Then a man got up to try and calm the situation before taking her to the back of the plane. ‘ 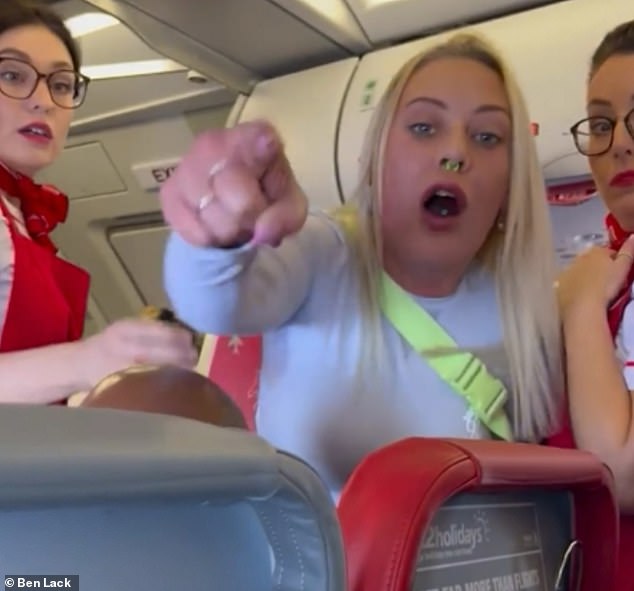 The passenger said that staff then made the decision to divert the flight to Vienna.

As the plane landed, the woman was said to have slapped another passenger as she was getting off.

‘This is the first time we have had to land because of someone on a flight,’ the passenger added. ‘Jet2 staff handled the whole situation very well. Nobody could help the out-of-control woman once she slapped the passenger. ‘

Jet2 sent a text message to passengers onboard the flight just before 12pm, apologising for the incident.

The message said: ‘Hello, we are sorry that due to the disruptive behavior of a fellow passenger, your flight has been diverted to Vienna.

‘We are working on a situation to get you on your way as soon as possible.’

The flight left Vienna at 1pm before arriving at Antalya just after 3pm – one hour and 15 minutes later than scheduled. 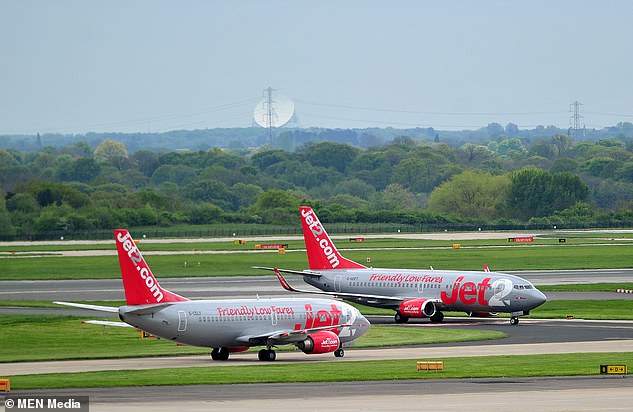 The flight had to be diverted to the Austrian capital so the woman could be removed, arriving at 11.40am before carrying on to reach Antalya two hours later than scheduled

Manchester Airport declined to comment on the situation, saying it was a matter for the airline to comment on.

In a statement, Jet2 confirmed the incident. The flight operator also confirmed that the flight successfully continued onto Antalya once the passenger had been offloaded.

A Jet2 spokesperson told the MEN: ‘We can confirm that flight LS895 from Manchester to Antalya diverted to Vienna earlier today so that a disruptive passenger could be offloaded.

‘As a family friendly airline, we take a zero tolerance approach to disruptive behavior.’