French car giant Renault said today it would immediately suspend operations at its Moscow factory after Kyiv called for a boycott of the company for remaining in Russia.

Renault is also considering ‘the possible options’ for its Russian affiliate Avtovaz, the company said in a statement, adding that it had downgraded its 2022 financial outlook, revising its profit margin to around 3 percent.

‘Renault, Auchan, Leroy Merlin must stop being sponsors of the Russian war machine, stop financing the murder of children and women, of rape,’ Zelensky said in an address via video link to France’s National Assembly.

Renault on Wednesday said it would suspend operations at its plant in Moscow while it assesses options on its majority stake in Avtovaz, the country’s number one carmaker. Pictured: A Renault car is seen in a show room at Renault factory in Moscow, Russia (2019) 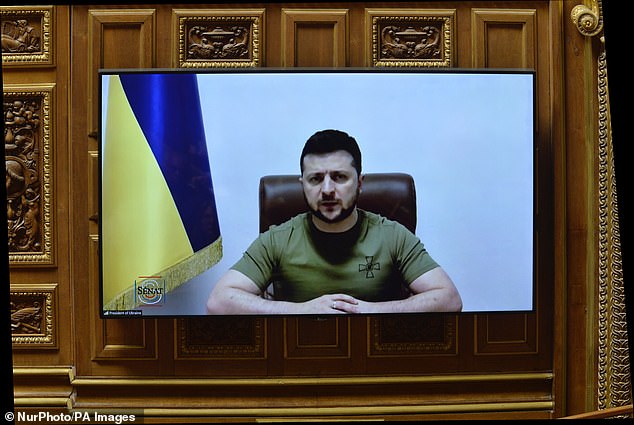 Seated at a desk in his trademark khaki T-shirt, Zelensky received a standing ovation from French lawmakers after his appeal. At his request for him they also observed a minute of silence in tribute to the victims of the nearly month-long war.

Renault, which had not commented on its exposure to Russia since the start of the invasion of Ukraine, declined to comment on Zelensky’s appeal.

Sources told Reuters the company’s board was set to discuss the situation at a board meeting later on Wednesday.

Ukraine’s Foreign Secretary meanwhile called for a boycott of Renault over its decision to not pull out of Russia sooner.

‘Not that it should surprise anyone when Renault supports a brutal war of aggression in Europe. But mistakes must come with a price, especially when repeated. I call on customers and businesses around the globe to boycott Group Renault. ‘

Renault – which controls Avtovaz, Russia’s number one carmaker – is among Western firms most exposed to Russia, where it generates 8 percent of its core earnings, Citibank said.

This is mainly through its 69 percent stake in Avtovaz, which is behind the Lada car brand.

Two sources familiar with the situation told Reuters that about 10 days ago Renault board members considered different scenarios, but decided to maintain its presence in Russia for now, with the support of its main shareholder, the French state, and in line with international sanctions.

The sources said the company fears that exiting Russia would jeopardise the recovery of the firm, which returned to profit in 2021 after two years of losses. Avtovaz accounted for half of the current profit of its car division last year. 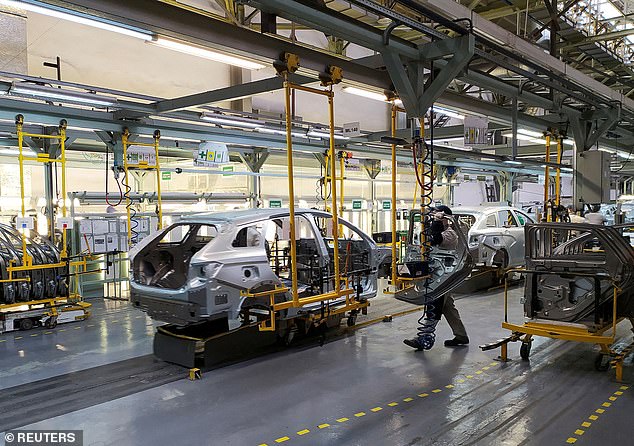 Employees work at the assembly line of the LADA Izhevsk automobile plant, part of the Avtovaz Group, in Izhevsk, Russia February 22, 2022

Renault said earlier on Wednesday it was considering again suspending production at its Moscow plant due to logistics issues.

Leroy Merlin, which belongs to the same Mulliez group as Auchan, also declined to comment. Mulliez also owns the Decathlon sports goods chain, which has a large presence in Russia.

French companies that have come under hefty criticism for still operating in Russia also include energy giant Total and food group Danone.

Zelensky did not name them but asked French firms in general to leave Russia.

Moscow calls its actions in Ukraine a ‘special operation’ to disarm and ‘denazify’ Ukraine. Ukraine and Western allies call this a baseless pretext for Putin’s brutal invasion that has raised fears of wider conflict in Europe.

Since Putin launched the invasion, heavy sanctions have been levied against Russia, crippling its economy and causing the value of the Ruble to plummet.

In retaliation, Putin today declared Russia will only accept rubles as payment for gas supplies from ‘unfriendly’ countries in retaliation for the sanctions. 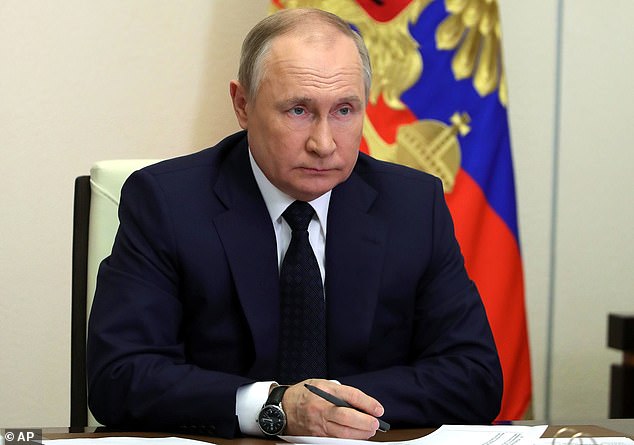 ‘Russia will continue, of course, to supply natural gas in accordance with volumes and prices … fixed in previously concluded contracts,’ Putin said, adding that sanctions had ‘destroyed Moscow’s trust’.

‘The changes will only affect the currency of payment, which will be changed to Russian rubles’ for a list of countries, corresponding to those that have imposed sanctions.

Putin said the government and central bank had one week to come up with a solution on how to move these operations to the Russian currency and that gas giant Gazprom would be ordered to make the corresponding changes to gas contracts.

Contractual changes may mean European customers have to renegotiate their agreements, which are mostly in euros, possibly leading to supply disruptions as talks take place.

But with a host of European countries still dependent on Moscow for most of their gas and oil supplies, disruptions would push up prices and deepen the continent-wide energy crisis.

The move is also expected to boost the Russian currency which fell to a record low of 120 to the dollar this month following the invasion of Ukraine, despite usually trading around 80 to the dollar.

The list of ‘unfriendly’ countries includes the United States, European Union member states, Britain, Japan, Canada, Norway, Singapore, South Korea, Switzerland and Ukraine. Among other things, deals with companies and individuals from those countries have to be approved by a government commission.

NATO estimated on Wednesday that 7,000 to 15,000 Russian soldiers have been killed in four weeks of war in Ukraine, where ferocious fighting by the country’s fast-moving defenders has denied Moscow the lightning victory it sought.

By way of comparison, Moscow lost about 15,000 soldiers in Afghanistan over 10 years.

A senior NATO military official said the alliance’s estimate was based on information from Ukrainian officials, what Russia has released – intentionally or not – and intelligence gathered from open sources. The official spoke on condition of anonymity under ground rules set by NATO.

When Russia unleashed its invasion February 24 in Europe’s biggest offensive since World War II, a swift toppling of Ukraine’s democratically elected government seemed likely. But with Wednesday marking four full weeks of fighting, Russia is bogged down in a grinding military campaign.