Britain’s daily Covid cases breached 100,000 for the second time this month today after rising 12 per cent in a week, while hospitalizations and deaths also ticked upwards.

It is the second time in just eight days that daily cases have risen above the six-figure threshold, after the Omicron wave collapsed in late January.

Another 194 Covid fatalities were reported today, up 27 per cent on a week ago. Hospitalisations also rose 30 per cent in a week, according to the latest UK-wide data for March 19, with 2,011 new admissions.

The rising statistics have been attributed to the loosening of restrictions across the UK and the rise of the more infectious BA.2 Omicron subvariant.

The extremely transmissible sub-strain is still causing milder illness than previous variants, however, and around half of patients in hospital with Covid currently are not primarily ill with the virus, separate data suggests.

Meanwhile, in a downbeat assessment of how the next phase of the pandemic will pan out, Professor Chris Whitty warned today that there was a ‘high chance’ a Covid variant more severe than Omicron and BA.2 will emerge in the next two years.

Speaking at the Local Government Association’s public health conference, Sir Chris said there was still a ‘long way to go’ because the virus will continue to ‘throw surprises’. He also insisted the virus – which now poses a similar threat as flu – will be with us ‘for the rest of our lives’.

The emergence of a more dangerous strain could ‘significantly change our balance of risk’, Sir Chris added in his speech, on the second anniversary of the historic coronavirus lockdown. 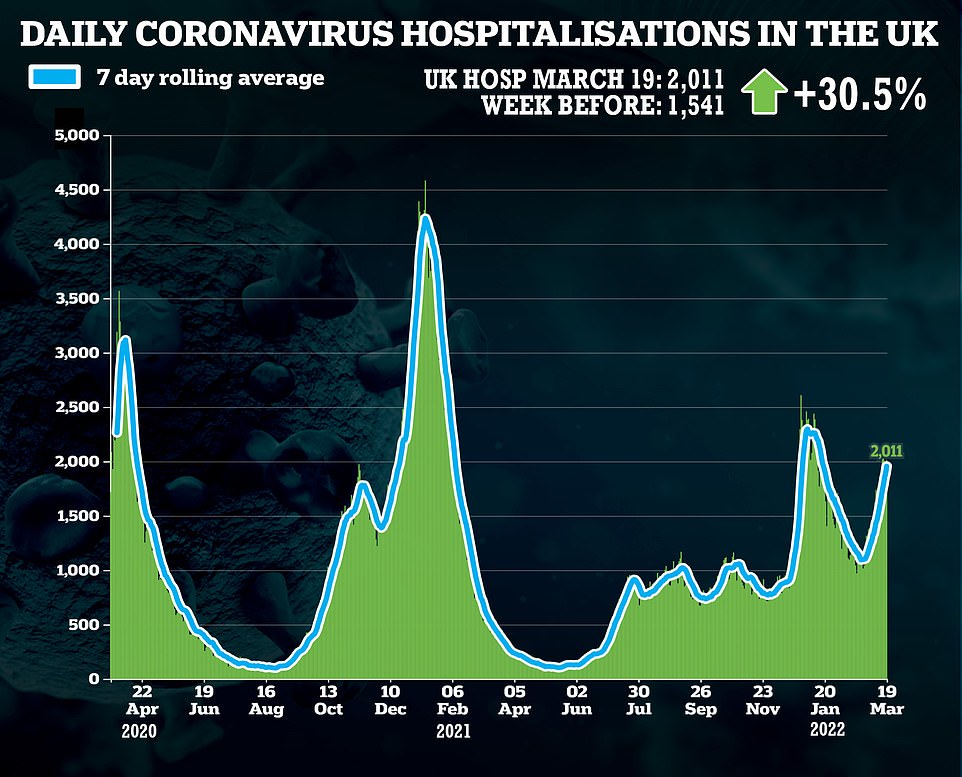 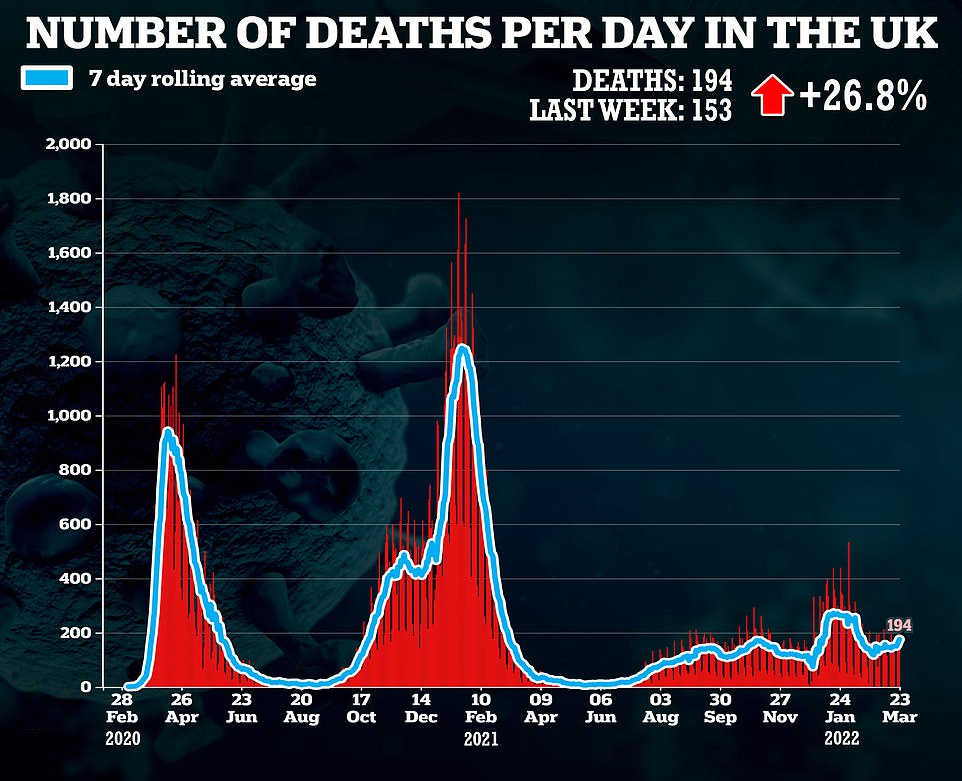 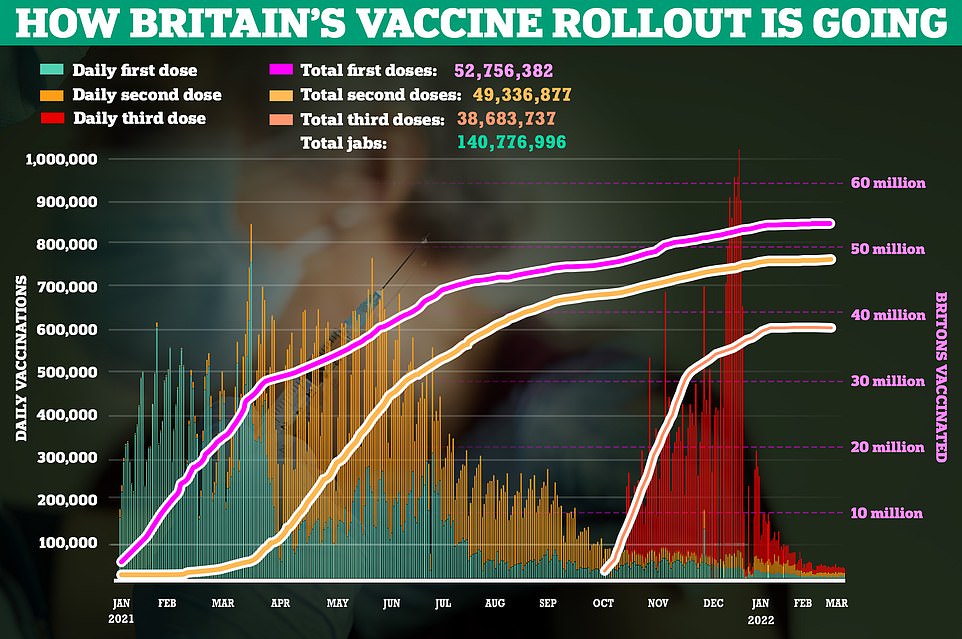 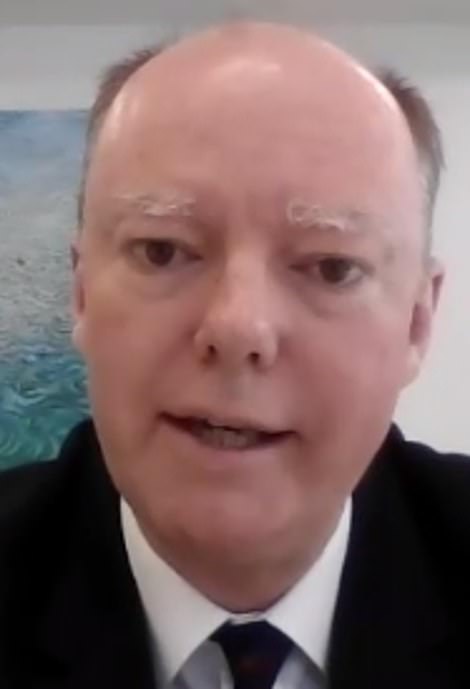 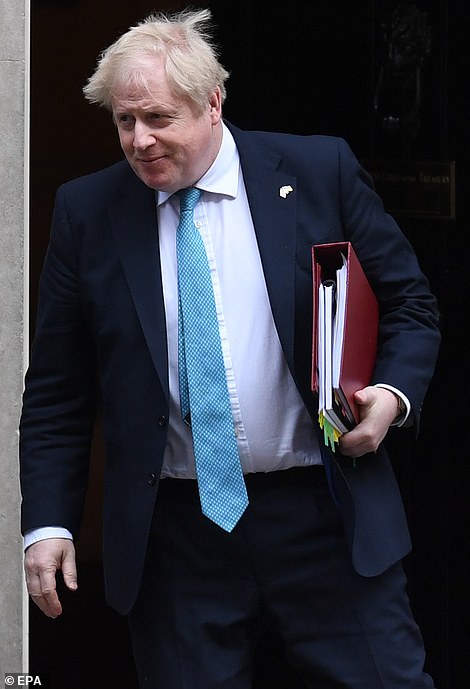 Sir Chris Whitty, England’s chief medical officer, said there is a ‘high chance’ a new variant will emerge ‘at some point in the next two years’ that ‘significantly changes our balance of risk’. Right: Boris Johnson leaving No10, Downing Street

Some experts believe there is a high chance that a new Covid variant could be more severe than Omicron because the strain came from a different part of the virus’s lineage and there is no guarantee the next strain will evolve directly from Omicron.

But other experts have repeatedly insisted the darkest days of the pandemic have been consigned to history, as the virus will mutate into a cold-causing pathogen over time.

UK Health Security Agency (UKHSA) data showed daily Covid cases ticked up in England (up 34 per cent) and Scotland (up 16 per cent) compared to the same time last week.

They remained level in Wales (no change compared to last week), but fell in Northern Ireland (down five per cent).

About 770,000 swabs were carried out yesterday, similar to the same time last week, in another sign the country’s outbreak is still growing.

People in England are being discouraged from ordering free lateral flow tests ahead of the swabbing program being axed next week.

Anyone trying to get a pack of Covid swabs from the Government’s website is now met with a message telling them supplies are needed for the vulnerable.

The notice says most people not suffering symptoms of the virus no longer need to test themselves.

It adds that tests should be left for ‘people that need them most’, including NHS staff, those at high risk and those visiting high-risk settings such as hospitals.

Lateral flow tests will no longer be free in England from April 1 under Boris Johnson’s plans for ‘living with’ the virus.

Free Covid swabs have run out by 10am every day this week as the deadline for ending the mass swabbing scheme – which cost £ 2billion at the height of the Omicron wave in January – approaches.

High street retailers such as Boots and Superdrug say they will keep selling the swabs for as little as £ 2 each.

The surging wave of infections has been blamed on BA.2, thought to be significantly more infectious than its parent Omicron strain. Although ministers say an uptick in cases was to be expected once the final Covid restrictions had been lifted.

Some experts have suggested the wave will peak before the end of this month.

Omicron burst onto the scene in November, with infection rates hitting pandemic highs and experts estimating one in 15 people in England were infected at the winter peak.

Grim modeling by SAGE had warned of up to 6,000 deaths a day, prompting the Government’s own advisers to call for stringent measures. Some doom-mongering scientists even wanted a circuit-breaker.

But Boris Johnson held his nerve and stuck to the ‘Plan B’ measures already in place, which saw the return of work from home, face masks in public places and a ramping up of the booster program.

Sky-high immunity rates and the variant’s milder nature blunted the impact of the virus, with Covid deaths peaking at 300 a day – similar to levels seen in a bad flu winter and a fraction of rates seen during the first and second waves. NHS hospitals were never overwhelmed and intensive care admissions barely budged.

Asked at the conference today when the Covid pandemic will truly shift to an endemic stage, Sir Chris said it ‘will become less dominant steadily’.

He said the UK would likely be hit by seasonal waves for the next ‘two or three years’ that will be ‘interspersed’ by new variants that could occur between peaks.

Dismissing the idea that Covid has become endemic, he said it is incorrect to assume the virus has reached a ‘stable state’ around the globe, despite restrictions easing for Britons.

Sir Chris added: ‘The UK has chosen a particular path and we have high immunity due to vaccination rates in children, the elderly and some immunity due to infection as well.

‘But others have chosen perfectly sensible paths but they’re going to play out differently. So I think we need to be aware there’s a long way to go with this and it’ll also throw surprises as it has.

‘And there’s a high chance that we will all be discussing, and I will be discussing with my colleagues, a new variant at some point in the next two years that actually significantly changes our balance of risk.’

Sir Chris told the virtual conference: ‘We could well end up with a new variant that produces worse problems than we’ve got with Omicron and the Omicron problems are by no means trivial.’ 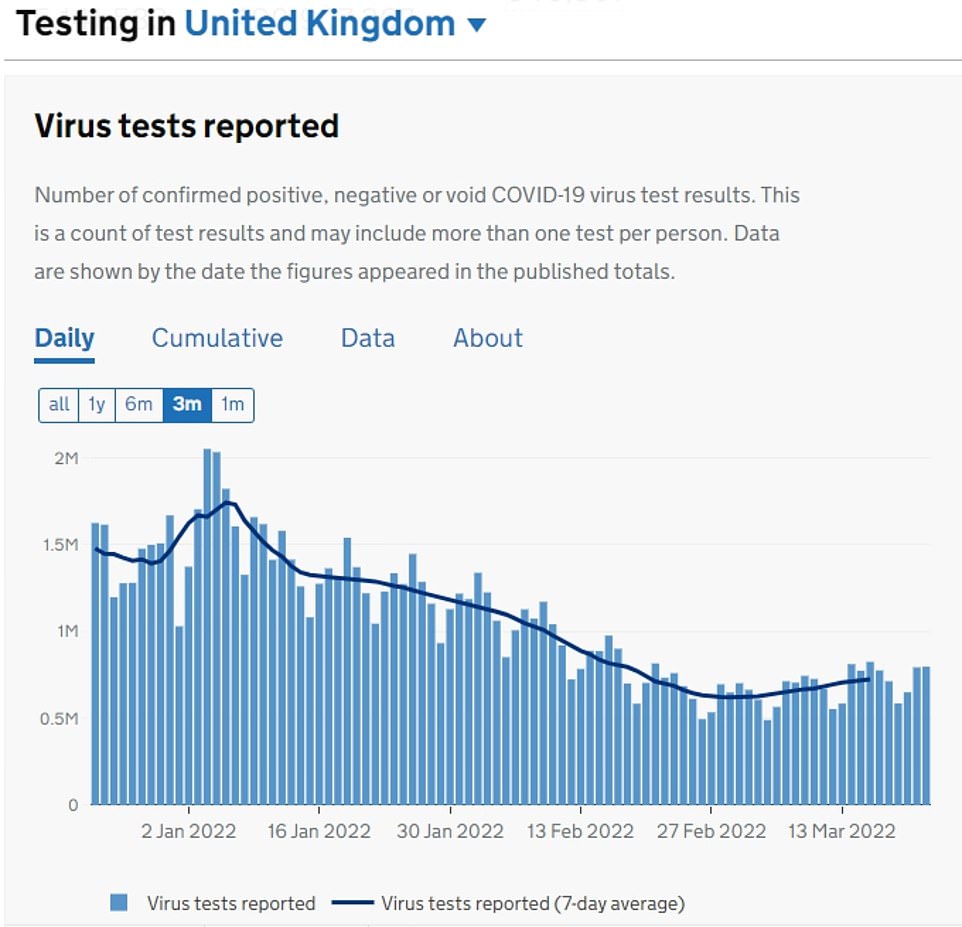 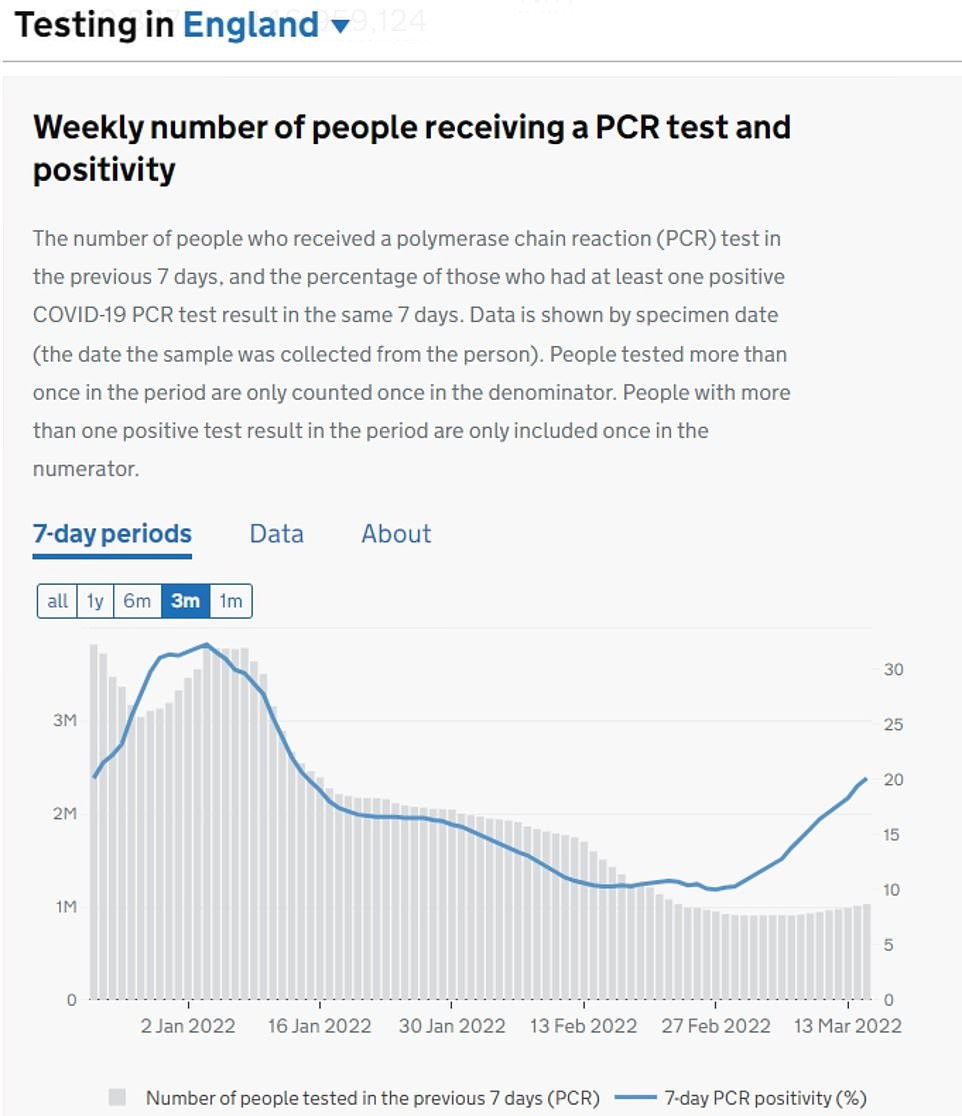 Has the City finally ditched WFH?

Sales at Pret A Manger chains in the City of London and the capital’s airports have hit near pre-pandemic levels – in a sign life in Britain is returning to normality following the lifting of Covid restrictions.

Figures from the ‘Pret Index’ show the chain’s transactions in the City and Canary Wharf reached a near pandemic high of 86 per cent of pre-Covid-19 levels last week – up from just 29 per cent in January.

In London’s airports, including Heathrow, Gatwick, Luton and City, the figure reached 93 per cent – for the only the second time since March last year.

Figures in the capital’s bustling entertainment district, a key tourist area and home to dozens of theaters, regularly exceeded pre-pandemic levels last summer while the majority of Covid restrictions were lifted in England.

While the Pret Index is not a direct measures of how many people have returned to the office or have used an airport, it has been used by Bloomberg as an indicator of footfall in an area during Covid.

Gloomy SAGE advisers warned of a ‘realistic possibility’ that a more lethal variant could emerge that kills one in three people, in line with earlier coronaviruses such as MERS.

And Professor Devi Sridhar, a global public health expert at the University of Edinburgh, told the conference that she does not believe the virus will ‘fade into the background’ anytime soon.

It comes as the UK’s daily Covid cases yesterday dropped for the first time in three weeks. Government dashboard data showed 94,524 infections were recorded, down 14 per cent on a week ago.

Covid deaths rose by a quarter compared to a week ago, however, with 250 recorded.

And hospital admissions also ticked upwards 17 per cent in a week, after 1,879 admissions were logged on March 18 – the latest date UK-wide data is available for.

Experts have blamed the uptick on BA.2, which is now dominant in the country. But the strain is not thought to be any more severe than the original Omicron variant.

Cases have also been spiralling for a fortnight on the back of England’s ‘Freedom Day’, which the Health Secretary Sajid Javid insisted was ‘expected’.

Speaking about the current Covid situation, Sir Chris said the BA.2 Omicron variant is a ‘large part’ of the current high rates that are rising ‘in virtually all parts of England’.

He said the strain, thought to be as contagious as chickenpox, is not translating into surges in deaths or intensive care admissions – but ‘that doesn’t mean that it is having no impact at all’.

There are ‘significant numbers’ in hospital and admissions will ‘rise for at least the next two weeks’, which Sir Chris warned would pile pressure on the NHS.

He added that the health system was already under ‘significant’ strain as it juggles an uptick in Covid patients alongside the national effort to tackle the record backlog of patients waiting for routine operations.

Sir Chris noted that the ratio of infections turning into hospitalizations and deaths has consistently decreased due to increasing immunity from vaccines and infection, as well as improvements in medical care.

He said: ‘There has been a de-risking to some degree of Covid over time. But de-risking is not the same as no risk and there is still significant risk. ‘