By Rob Hull For Thisismoney.co.uk

Ferrari, arguably the most iconic of all supercar brands, has this week shown the first official image of its debut SUV model, confirming it will be revealed in full later this year.

Codenamed ‘Purosangue’, which translates to ‘Thoroughbred’, the company’s first foray into the 4X4 market put it head-to-head against Aston Martin’s DBX and Lamborghini’s Urus in the ‘super-SUV’ segment, with prices for the stallion-adorned performance car starting at around £ 200,000.

While the name is still yet to be confirmed, this image shared on Ferrari’s Instagram account shows a high-riding model with design features taken from its low-slung supercars.

First official picture of Ferrari’s SUV: The iconic Italian brand’s debut 4X4 vehicle will be unveiled this year, it has confirmed. Prices will start from around £ 200,000

In the social media post, the Maranello car maker said: ‘You’ve heard the rumors … and we’re delighted to confirm they’re true (some of them).

‘All will be revealed later this year.’

The single image shows only the front of the vehicle in a very darkly-lit photo – though a few tweaks of the brightness and exposure reveals a clear look at the bonnet, grille and headlight clusters.

The slim-line headlight design is very reminiscent to that of the SF90 supercar, with LED daytime running lights sitting within a narrow upper grille section that spans the width of the car. The bonnet shape is similar to the Roma grand tourer, though with a widened bulge down the center of the panel.

Yet it’s the enormous gaping grille in the lower section of the car – which in the image looks like it has a floating Ferrari emblem within it – that stands it apart from every other model in its arsenal to date.

What’s almost for certain is that the SUV will be based on the Roma GT’s platform, with the large bonnet suggesting a ferocious powerplant lies beneath.

It’s like to have a tweaked version of the Roma’s 3.9-liter twin-turbo V8, which produces over 600bhp, with power sent to all four wheels via a dual-clutch automatic gearbox.

This will pin the Ferrari perfectly against the Lamborghini equivalent, with the Urus’ 4.0-liter V8 putting out 640bhp, while Aston Martin’s recently-revealed DBX 707 also has a 4.0-liter, eight-cylinder motor producing closer to 700bhp.

That’s not to say Ferrari won’t also be sold with an electrified powertrain, with the Italian marque’s new 296 GTB debuting the brand’s V6 plug-in hybrid engine. 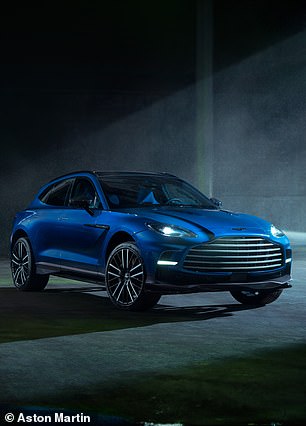 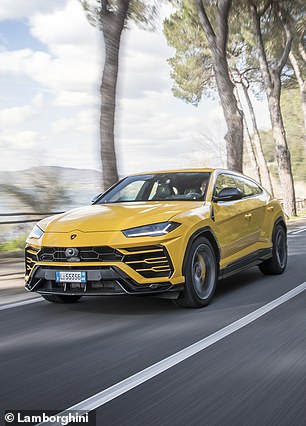 The first zero-emission all-electric Ferrari will hit the market in 2025, bosses at the legendary car company have confirmed.

Chairman John Elkann said the brand will continue with its electrification strategy, which includes its first battery-only powered model arriving by the middle of the decade – though it hasn’t made any promises to cull the internal combustion engine just yet.

Despite the confirmation that it will unveil the Purosangue SUV later this year, Ferrari has still yet to rubberstamp the date for the car’s official launch event.

Even if order books do open in 2022, first deliveries will almost certainly not start until next year, with prices from around £ 200,000.