Janey Godley says she’s accepted that she ‘may be facing death’ after her stage three ovarian cancer diagnosis.

The Scottish comedian, 61, announced in November last year that she had been diagnosed with ovarian cancer and underwent a full hysterectomy in January this year.

However just nine days after the operation, the mother was told that her cancer was stage three and she is currently undergoing chemotherapy.

In an emotional social media post, the 60-year-old stand-up revealed that she’s putting her ‘trust in science’ and has accepted the face that she has ‘no real control’ over her fate.

Janey Godley, pictured last year, has said she’s accepted that she ‘may be facing death’ after her stage three ovarian cancer diagnosis

Sharing a photo of herself cuddled up with her pet dog Honey on Facebook, Janey wrote: ‘I think I’ve had an epiphany.

‘I have been resisting the fact I have a life threatening cancer, I have tried to’ fight and be strong ‘instead of accepting that this whole year I just may be facing death or survival of something I have no real control over.

‘I appreciate all the amazing support and I believe my mental health will improve if I just lean into the fact that this cancer is happening.

‘I am not alone, millions of people survive this disease and living with it isn’t a failure – maybe I don’t have to fight every thing that happens to me and trust the science?’ 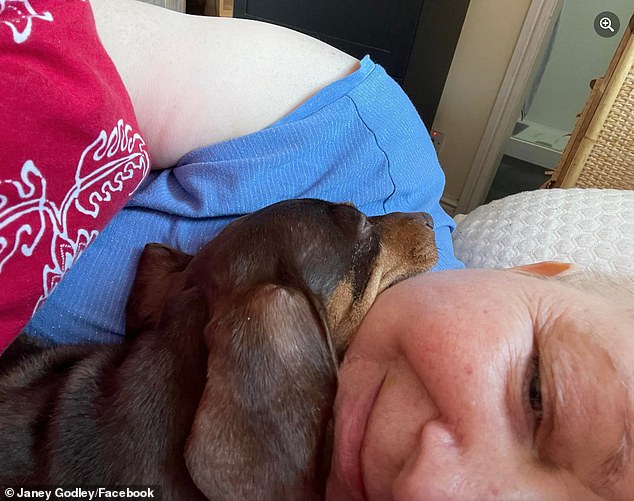 In an emotional social media post, the 60-year-old stand-up revealed that she’s putting her ‘trust in science’ and has accepted the face that she has ‘no real control’ over her fate

Janey revealed on social media that she had been diagnosed with ovarian cancer and was set to undergo a full hysterectomy in November 2021.

The comedian had been forced to cut her UK tour short earlier in the year after noticing ‘horrible pain’ in her stomach, bloating and exhaustion.

Growths that can be cancerous or benign: What is an ovarian tumor?

Ovarian tumors are abnormal growths that start in the ovary and may be cancerous or benign.

When cancerous, nine out of ten arise from the cell that line the ovaries and fallopian tubes – known as epithelial ovarian cancer.

High-grade serous ovarian cancer makes up six out of every ten epithelial cases. Most actually in the fallopian tubes.

These growths tend to be treated via chemo and radiotherapy.

Low-grade serous cancers account for just one in ten epithelial cases. These are slow growing and tend to be in younger women.

Surgery is the most effective treatment for low-grade serous epithelial cancers.

Appearing on ITV Janey explained: ‘I was in London and remember walking through Soho from Leister Square theater. ‘The tour had sold out and I had this horrible pain in my stomach and I couldn’t really eat.

‘Every time I went to eat I felt full, I was bloated and peeing all the time, all the time. I just didn’t feel right.

‘Exhausted, I could have slept all the way through the night right up to when I went on stage, [spend] two hours on stage and go to bed. So something was definitely wrong. ‘

After being encouraged to return home by her agent, Janey visited her GP who felt a mass around her stomach and sent her for blood tests, with results detecting a ‘problematic’ hormone.

On the same day Janey underwent a scan which revealed a sack on her ovary which was diagnosed as ovarian cancer.

The comedian underwent a hysterectomy in January this year, however shortly after the operation was diagnosed with stage three cancer.

In an emotional social media video, she said: ‘It’s been, I think, nine days since my hysterectomy. I’m still over at Shirley’s, recuperating in the best place possible.

‘My family are back in Glasgow, they are… everybody is just dealing with the news. I just thought that if I got the hysterectomy, that would be the end of everything, but it’s not, it’s the beginning because I have got stage three ovarian cancer.

‘I thought the big operation, that would be it, get on with everything, heal up the scar, get back on tour.

‘Not so, my life is completely changed and I have to process what this means now. And, it’s obviously going to mean chemotherapy and treatment.

‘And I don’t think that’s an option. I think the best option is to admit that this exists and to process it. ‘

Janey is currently undergoing chemotherapy and hopes to have her last session in May.