CARL Woods broke his silence last night following his court appearance – as he begged fans for help on OnlyFans.

The 33-year-old attended his hearing yesterday after he was charged under section 4 of the Public Order Act with using threatening, abusive or insulting words or behavior last month.

And afterwards he went on the adult only website to ask his followers if they knew a good new location for his garage.

The car trader has been storing his second hand motors at his fiancée Katie Price’s house.

Carl ran his second-hand car business from his dad’s Essex house but has changed the address to Katie’s in Horsham, West Sussex, which is under threat from her bankruptcy proceedings. 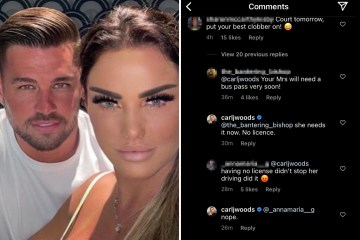 His followers speculated about what the cryptic message could mean after his difficult day.

Carl is set to face trial after pleading not guilty to using threatening and abusive behavior.

He arrived at Colchester Magistrates’ Court holding hands with Katie this morning, following an incident in Little Canfield, on August 22.

Wearing a black t-shirt, jeans and trainers, he only spoke to confirm his name and age before entering a not-guilty plea to the court.

He was supported by Katie who sat in the public gallery, wearing a khaki-green tracksuit and dark hoodie while looking at him in the dock.

If found guilty, he could be sentenced to a maximum of six months in prison.

Prosecutor Leigh Hart told the court: “On the evening of the 22 August 2021 the defendant got into an argument with his partner at his home address.

“This resulted in his partner leaving his property to go to another property.

“The defendant followed her and attempted to force the door of that property and was heard shouting outside in the street which was overheard by neighbors.”

Defending Carl, Mark Davies told the court that the incident was “nothing more than a squabble”.

Chairman of the bench Don Wickes told Woods he would next appear at Chelmsford Magistrates court for his trial on June 16.