Kourtney Kardashian and her fiance Travis Barker were couples goals as they enjoyed a night out at Nobu Malibu on Wednesday evening.

The couple wore matching black leather as they arrived to the restaurant where Khloe Kardashian was throwing a party for her denim brand Good America.

The chemistry was off the charts as Kourtney, 42, and Travis, 46, arrived to the luxe destination holding hands and looking oh so in love with one another.

Match made in leather! Kourtney Kardashian and her fiance di lei Travis Barker were couples goals as they enjoyed a night out at Nobu Malibu on Wednesday evening

Kourtney put on a head-turning display in a low-cut leopard print top which flashed a hint of cleavage.

The Poosh founder and her love looked the perfect pairing with their matching leather outfits.

Kourtney wore a black moto jacket and alligator print slacks while her man showcased his chest tattoos in an unbuttoned jumpsuit.

The petite reality star also rocked a pair of high heels, yet her beau still towered over her. 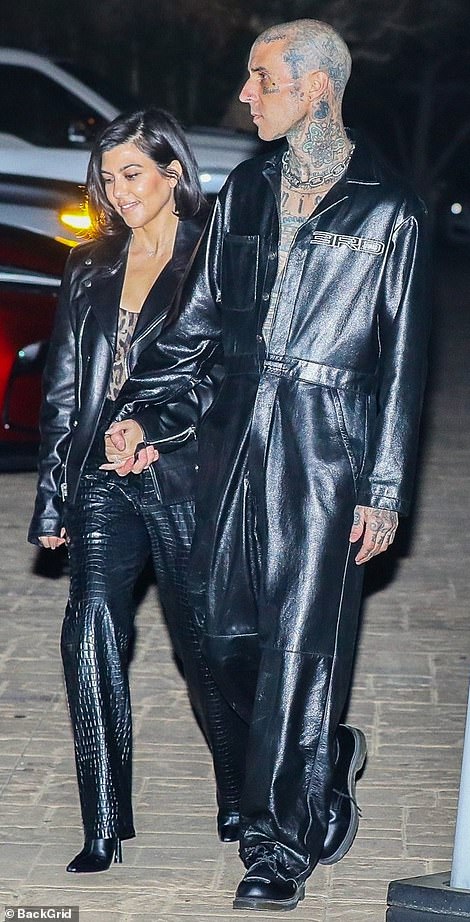 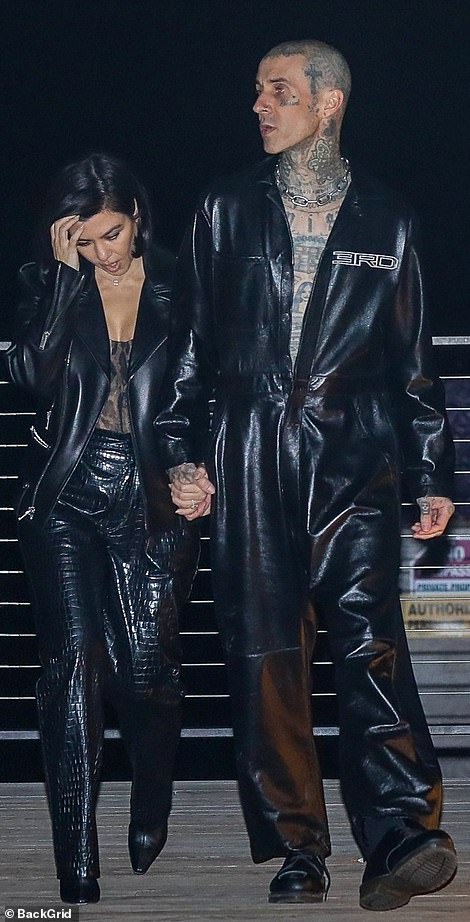 Couples goals! The duo were the perfect pairing as they arrived to the hot spot hand in hand 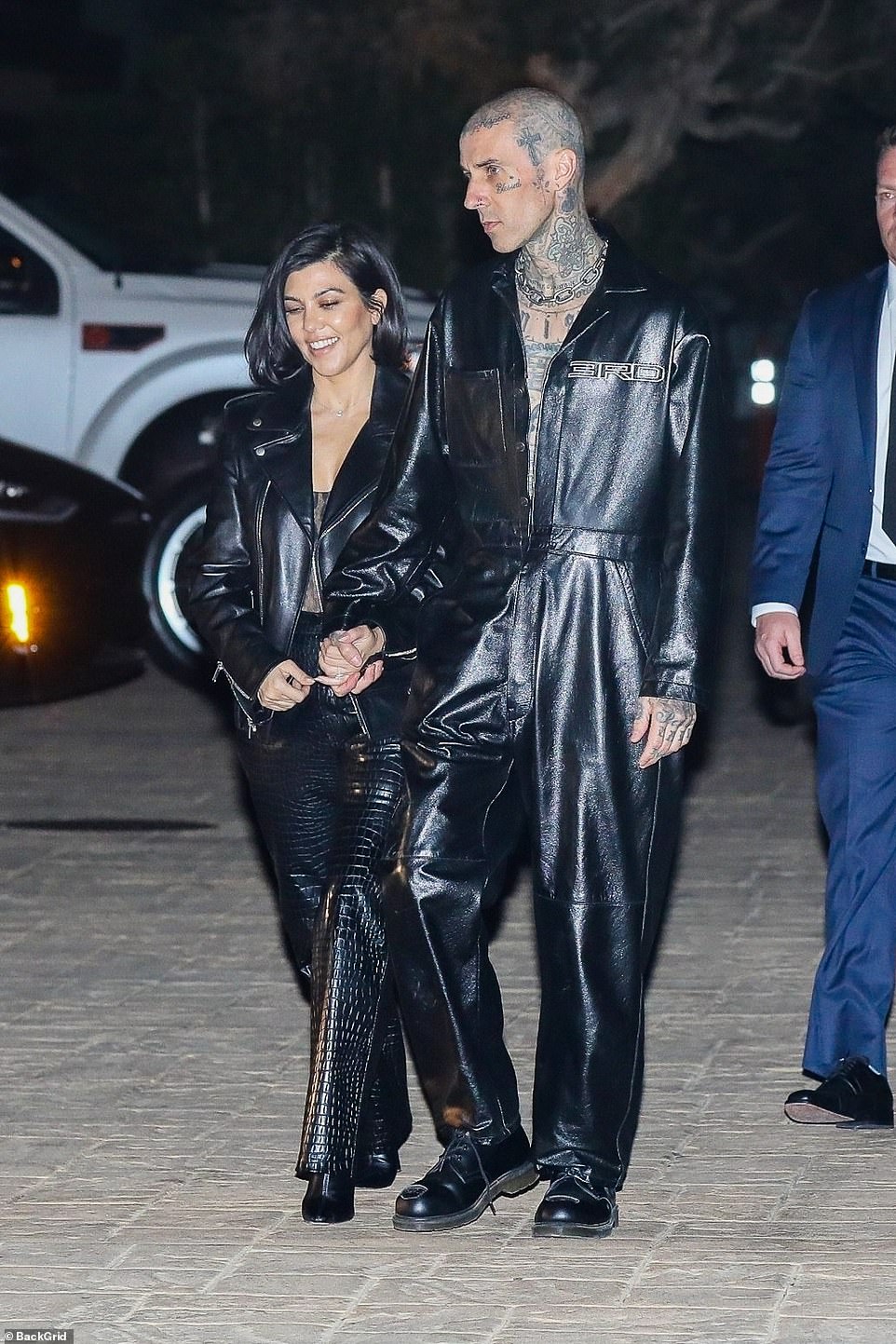 The smile that says I love you! Kourtney beamed with joy as she held hands with her beau

The look of love! Barker gazed at his leading lady as they strode through the lot

She styled her short locks into a glossy ‘do that bounced upon her shoulders in fun waves.

Travis embraced his edgy side as he accessorized the look with just a chain choker necklace.

The Blink-182 drummer gazed at Kourtney as she smiled brightly, occasionally wrapping her hand around his bicep.

At one point, the couple took their PDA to the next level as they appeared to share a kiss.

Hugs and kisses! The couple appeared to be sharing a steamy kiss at one point 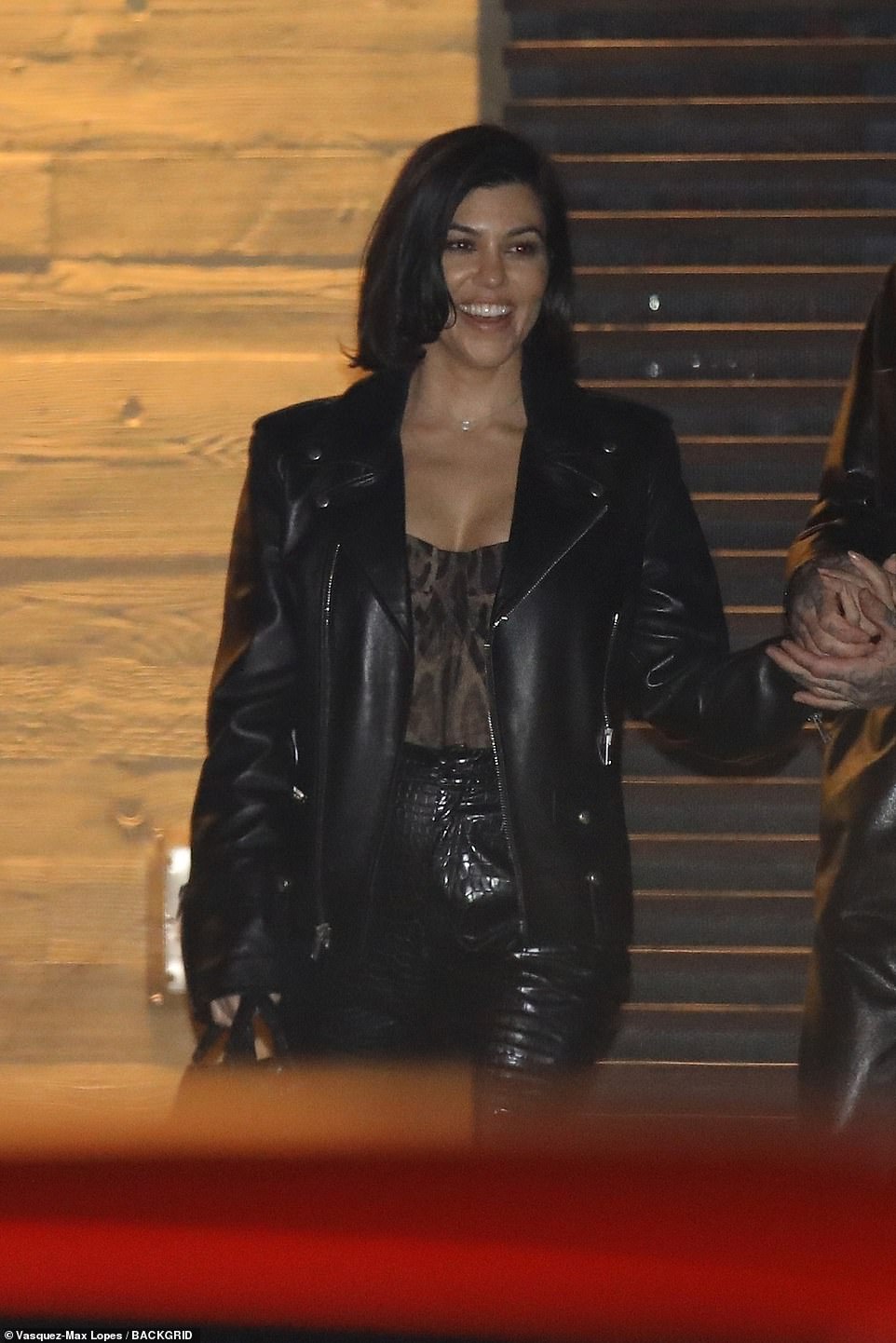 Stunning: Kourtney flashed a hint of cleavage in her leopard print top 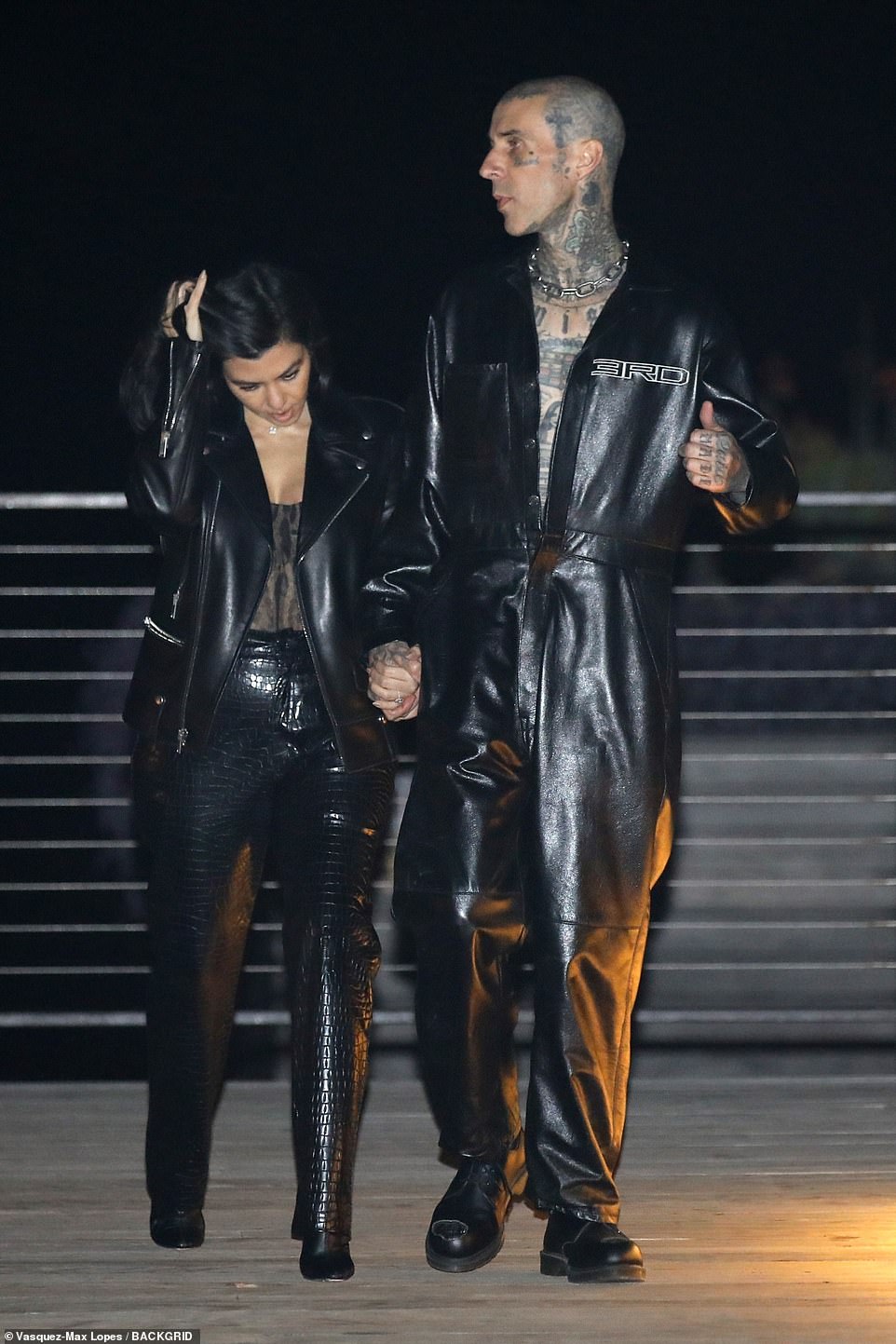 Hair today! The 42-year-old ran her hand through her short and glossy locks

Kourtney tilted her head up as her beau seemingly pressed his lips to hers.

As fans have noticed, the couple have never shied away from expressing their affection for one another in public.

And the couple’s love story will continue to play out on small screens in the upcoming Hulu series, The Kardashians.

A new trailer for the series showed Kourtney revealing plans for her fourth child as she visited a fertility doctor with Travis. 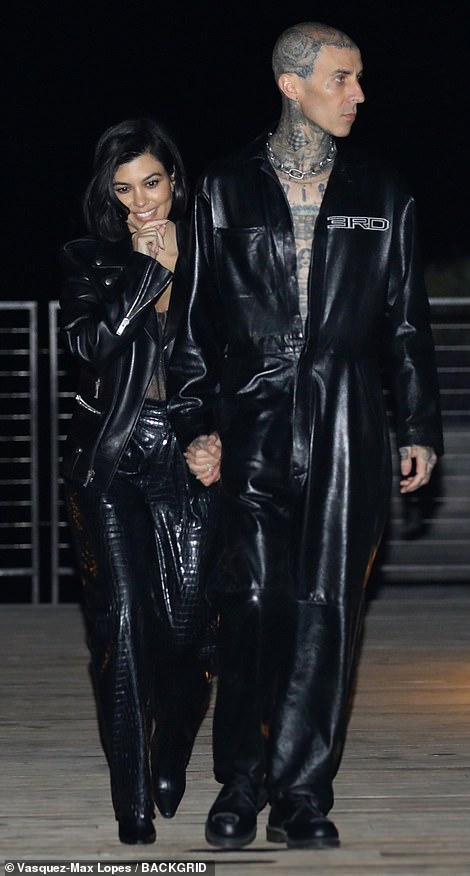 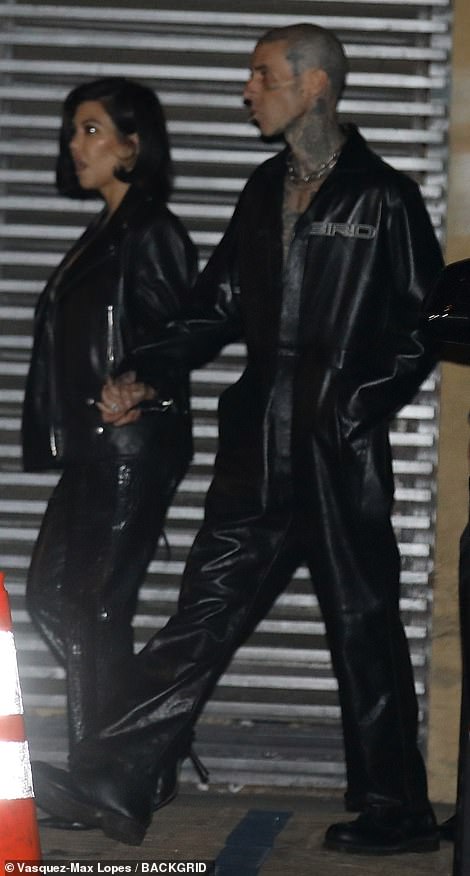 Back for more: The couple’s love story will continue to play out on small screens in the upcoming Hulu series, The Kardashians 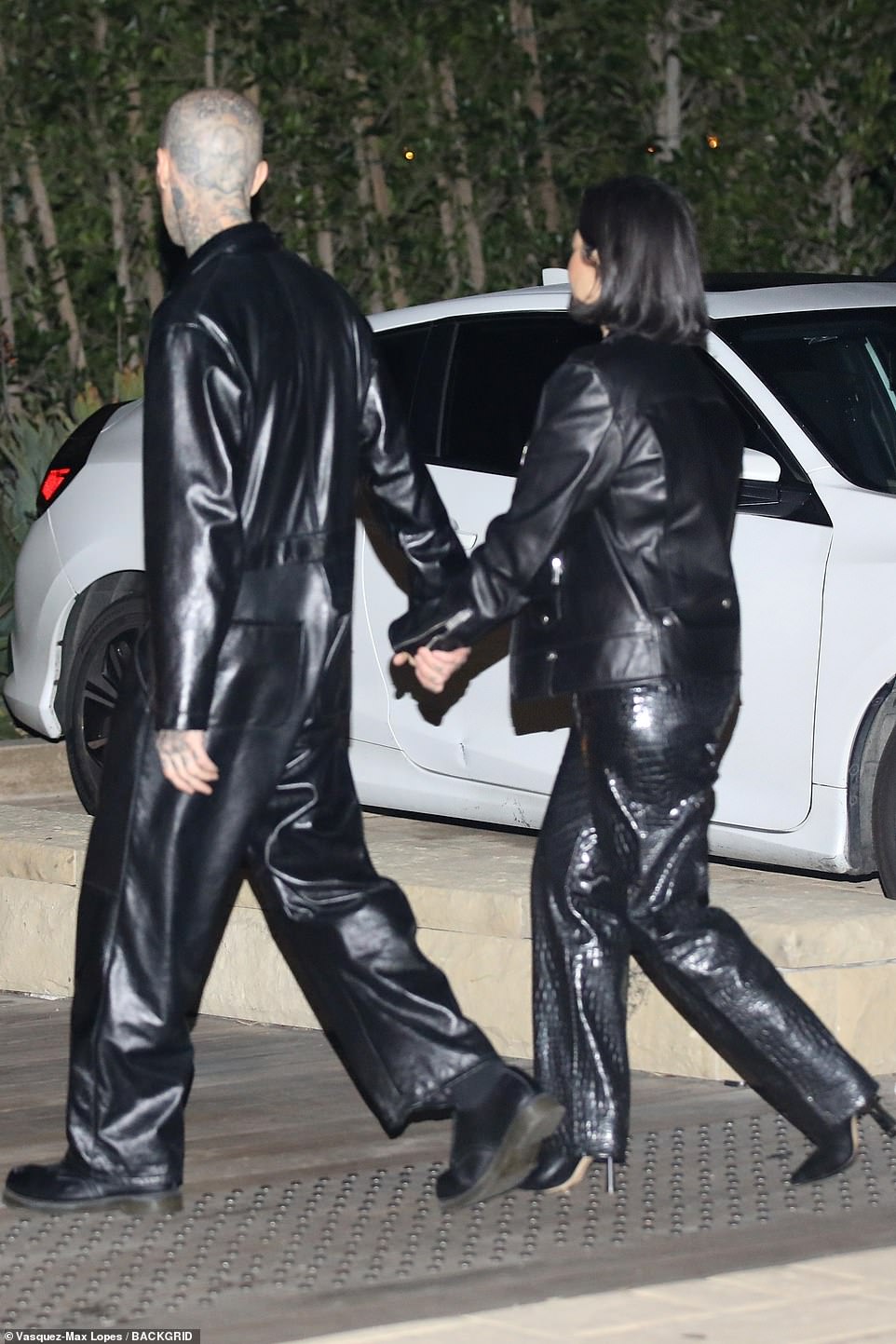 Lead the way! Travis held Kourtney’s hand as they made their way towards the hotspot 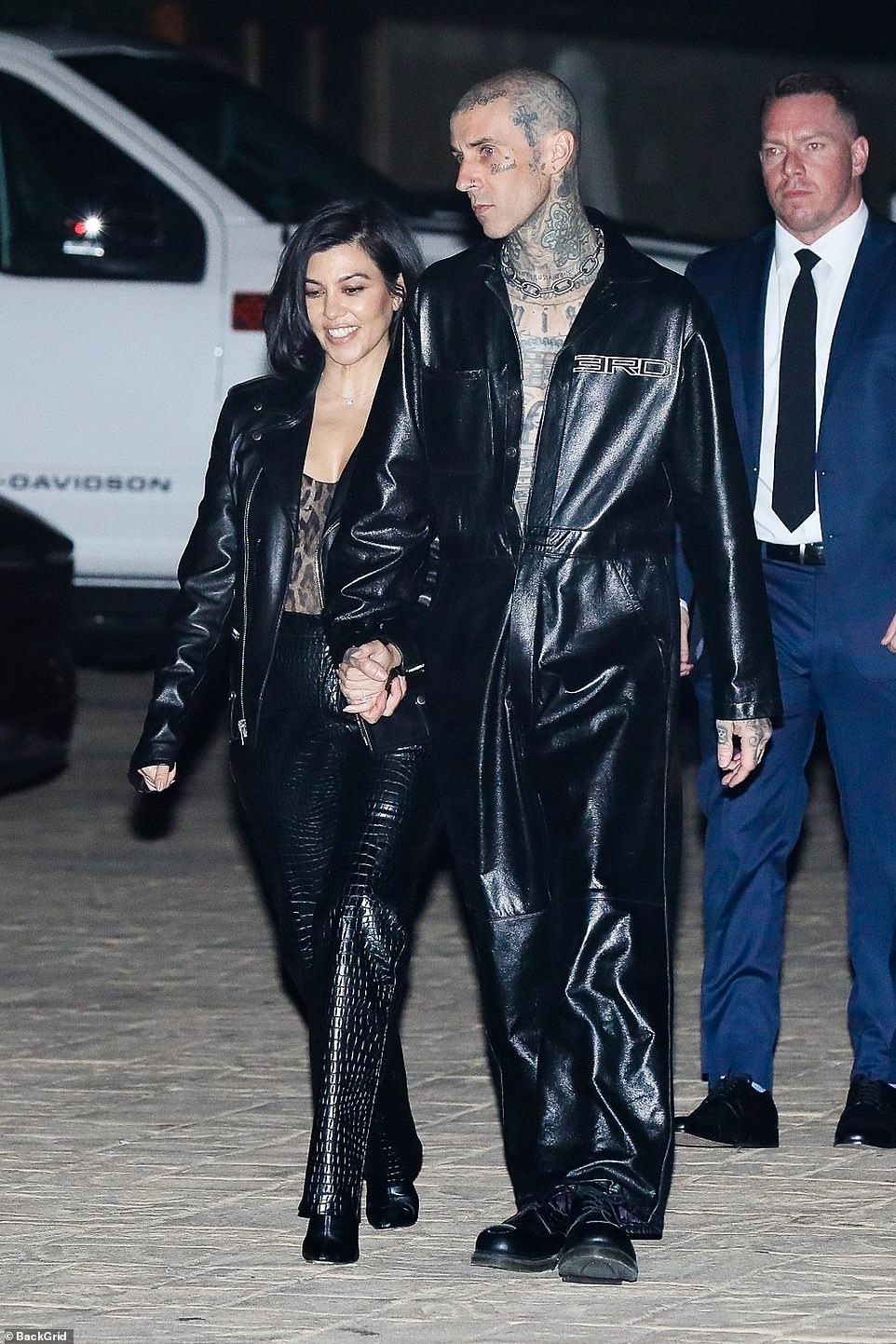 Edgy: Travis accessorized the look with a chain choker necklace

Kourtney – who will be turning 43 next month – officially announced: ‘Travis and I want to have a baby.’

When the couple were instructed to ‘put the sample in this cup,’ Kourtney laughed: ‘We’ll take our mics off so you don’t get the audio.’

Kourtney previously confessed on Ellen DeGeneres’ YouTube show Lady Parts that she was peer pressured into the freezing eggs procedure.

‘I froze mine too. Hopefully they’re sitting there okay. Just for … you never know. I really got talked into it. I was like, “Okay whatever, I’ll do it one time since everyone else is doing it I might as well,” ‘Kourtney explained. 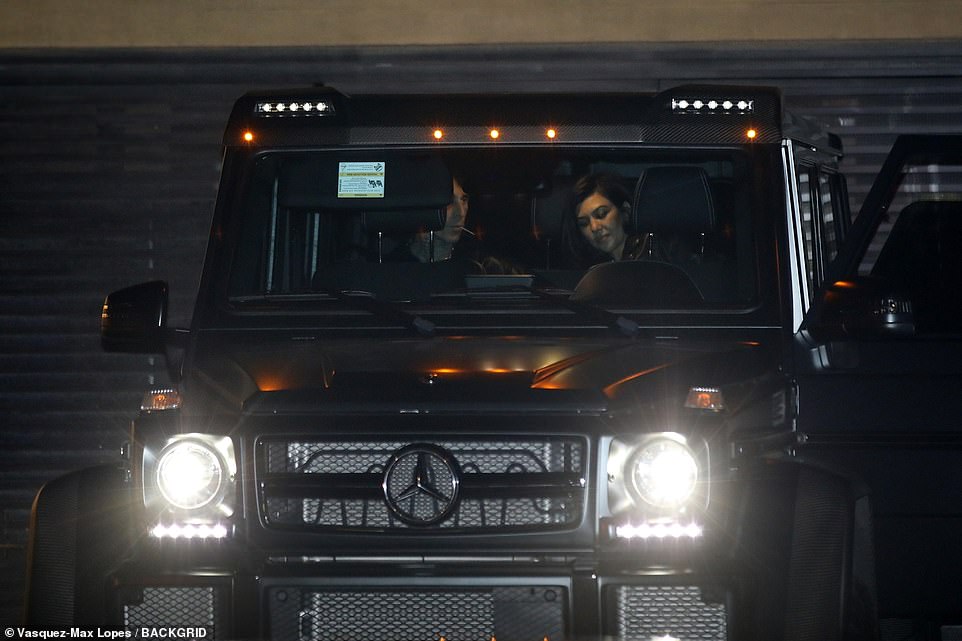 Ride or die! The engaged pair were spotted in the passenger seat of a luxurious Mercedes-Benz 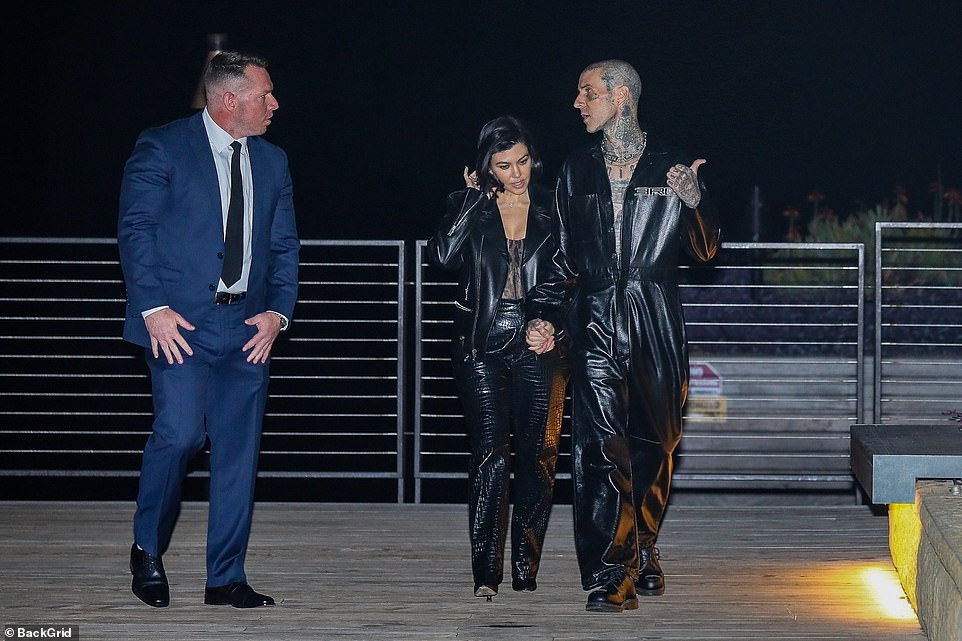 On the go: Barker spoke with a suit-clad man as they meandered through the Malibu spot

‘So I was like, “Okay everyone, stop rushing me. I don’t even know if I want to have another kid or if that’s like in the future or whatever.” And having control over my body, it just gave me, like, peace of mind. ‘ 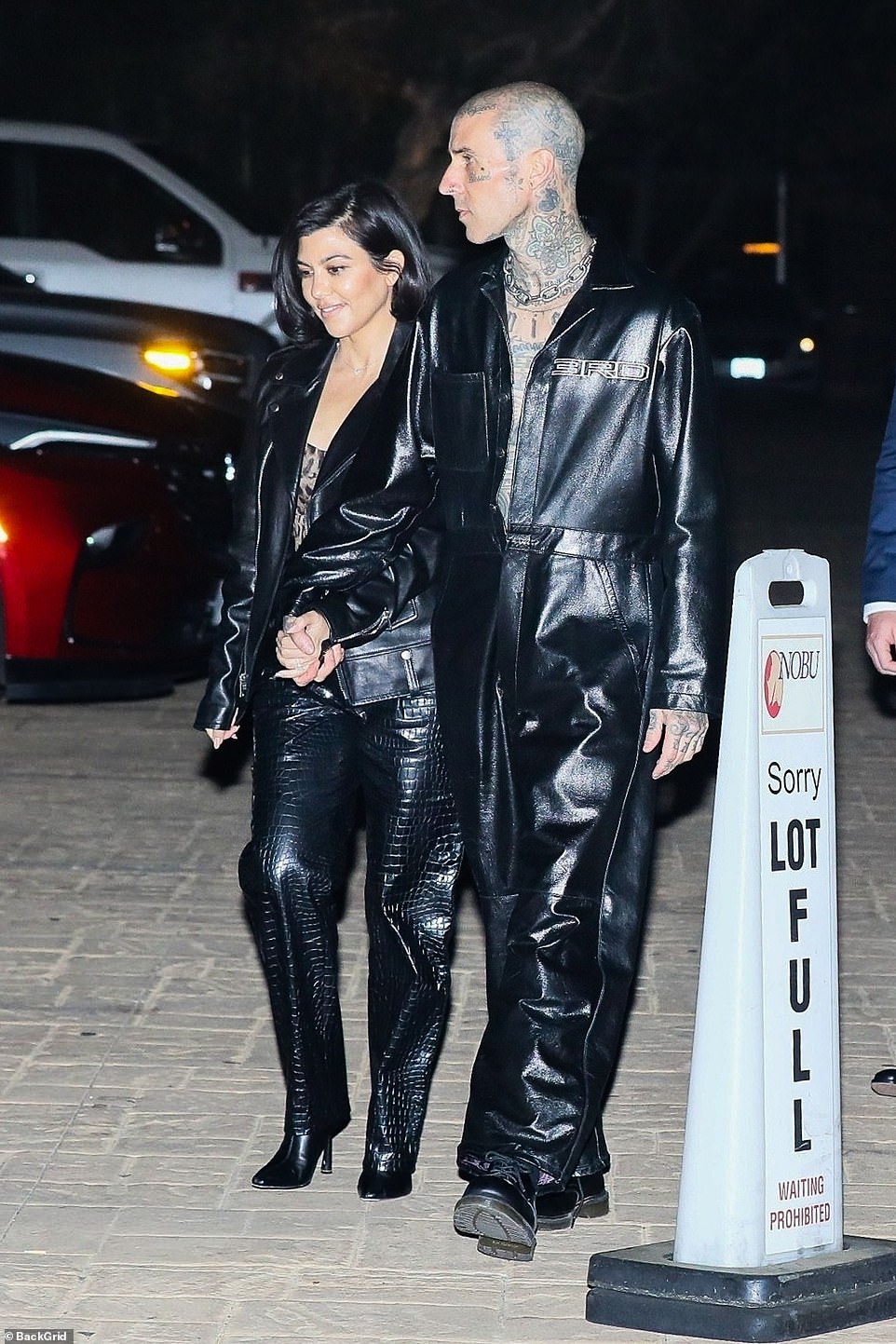