Queen Elizabeth II will appear on the cover of April’s edition of British Vogue for the first time ever in celebration of her Platinum Jubilee.

The cover features a 1957 image of her Majesty, taken by Lord Snowden, the former husband of Princess Margaret. The Queen wears the George IV State Diadem in the photo, which was taken around the time of her tenth wedding anniversary to Prince Philip.

According to a spokeswoman for the magazine, the issue will pay a ‘special tribute to Her Majesty, 95, ahead of the Platinum Jubilee, by looking back on its own unique relationship with the Monarch during her 70 years on the throne’.

The publication’s editor-in-chief, Edward Enninful, noted that in recent years, the ‘ancient institution’ of the Royal Family has appeared to change, and modernize, making an effort to highlight the work of underrepresent people.

Writing in his editor’s letter for the issue, he said: ‘When I received my OBE for services to diversity in fashion several years ago, I thought carefully about what the decision to accept it would mean.

The Queen will appear on one of two twin covers for the April edition of British Vogue magazine. The cover features an image of the royal snapped in 1957 by Lord Snowden 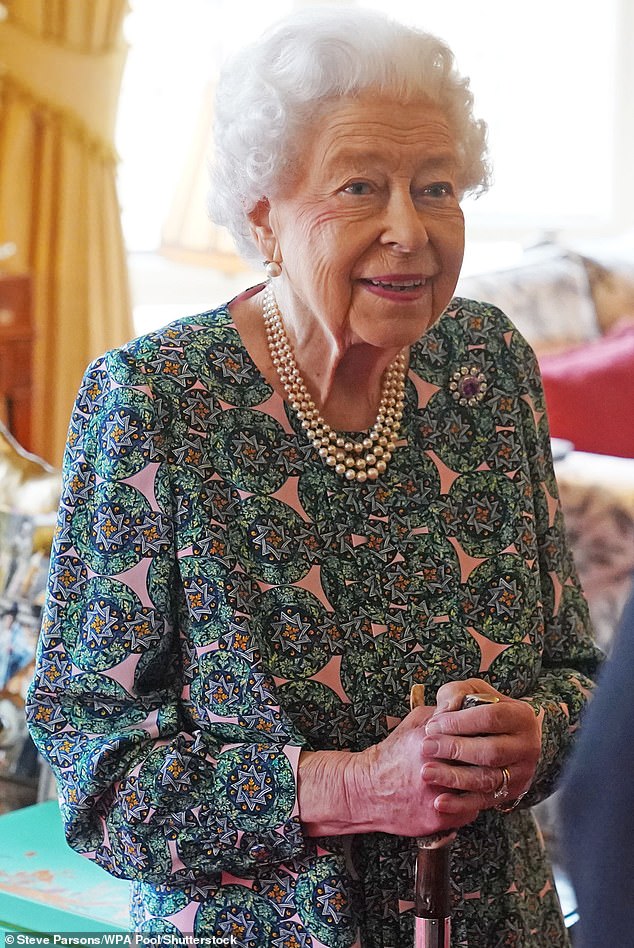 Her Majesty, pictured here in February when she met the incoming and outgoing Defense Service Secretaries at Windsor Castle, is also praised in the issue for her personal style

‘Ultimately, I saw an ancient institution that was setting about on a program of change and if they had noticed and wanted to recognize my work as something worth spotlighting, given the fact my endeavors were all about spotlighting under-represented people too, then I felt comfortable – keen, even – to engage. ‘

This does not mark the first time the publication has featured the Royal Family or that Edward has engaged with the Firm.

In 2016, the Duchess of Cambridge was Vogue’s cover star, fronting an issue celebrating the magazine’s centenary. And in 2019, the Duchess of Sussex guest-edited an issue. Her cover di lei featured images of woman she described as ‘forces for change’, including climate activist Greta Thunberg among others.

The issue followed the Duchess of Sussex emailing Edward and suggesting they collaborate, saying they had ‘lots in common’.

As well as featuring the monarch on its cover, the April issue will also pay tribute to her style.

The publication’s deputy editor and fashion features director Sarah Harris praises the Queen’s lavishly colored wardrobe, and outlines some of her fashion standbys, including her classic look of ‘an immaculately tailored dress and coat that falls below the knee, accessorised with a matching hat’. 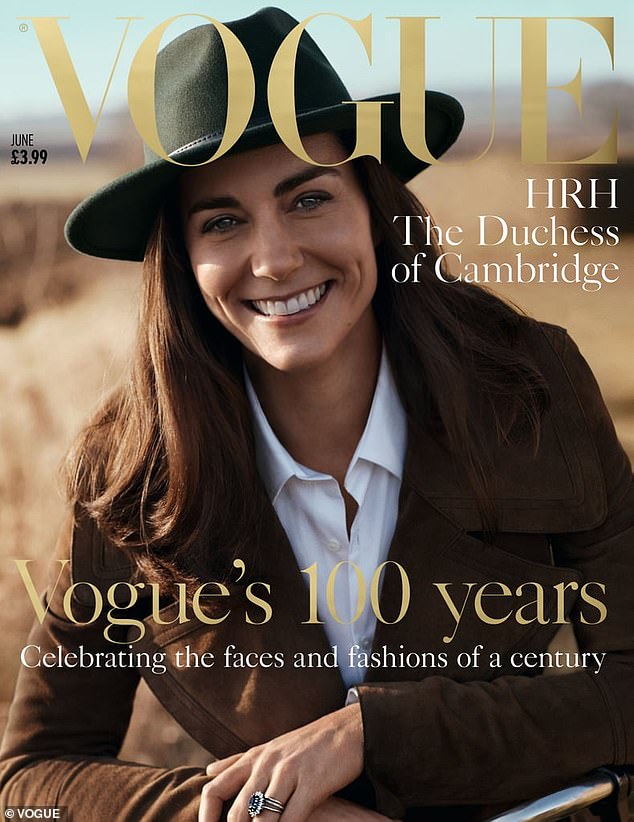 Kate Middleton, the Duchess of Cambridge, appeared on the cover of British Vogue in 2016, celebrating its centenary year 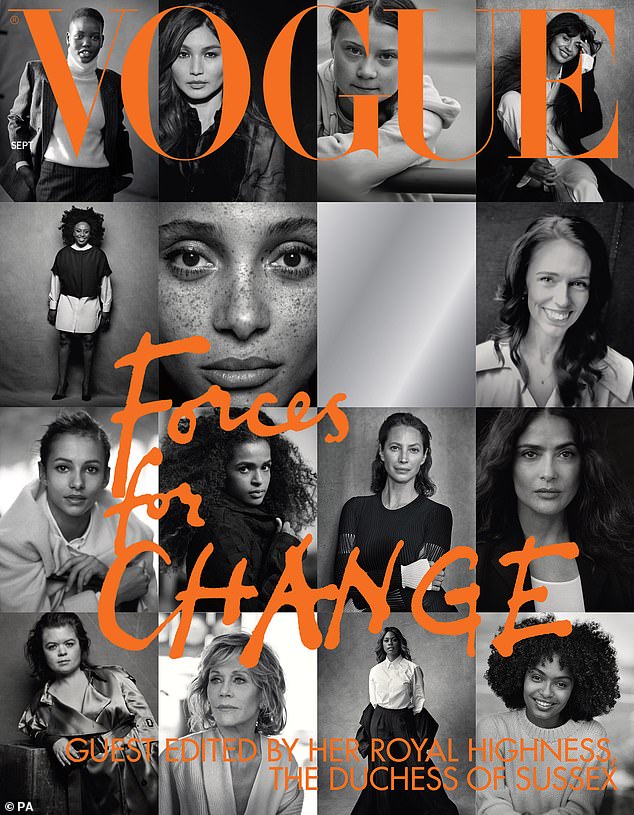 In 2019, Meghan Markle guest-edited the publication, producing this cover featuring images of woman she described as ‘forces for change’

She also noted some of her Majesty’s favorite accessories, noting that she often chooses a ‘three-strand pearl necklace and heirloom brooch, smart Anello & Davide loafers, white cotton-jersey gloves and a glossy framed handbag by Launer, carried in the crook of her arm ‘.

News of her Majesty’s cover comes amid reports that all 54 Commonwealth capitals will light Jubilee beacons during celebrations of the milestone in June.

As per the tradition of marking significant royal occasions with the beacons, the UK will see more than 1,500 illuminated across the nation, starting with the principle beacon at Buckingham Palace.

Additionally, from June 2nd, beacons will be illuminated in capital cities in countries including New Zealand and Australia, as well as across the Pacific region, and the 19 African Commonwealth member states. Europe, and the Caribbean and Americas will follow.

Speaking about the occasion, Bruno Peak, the pageantmaster of The Queen’s Platinum Jubilee Beacons, said: ‘The Queen has lit up the Commonwealth over 70 years through visits and other engagements, it is only fitting that we do likewise for her.’ 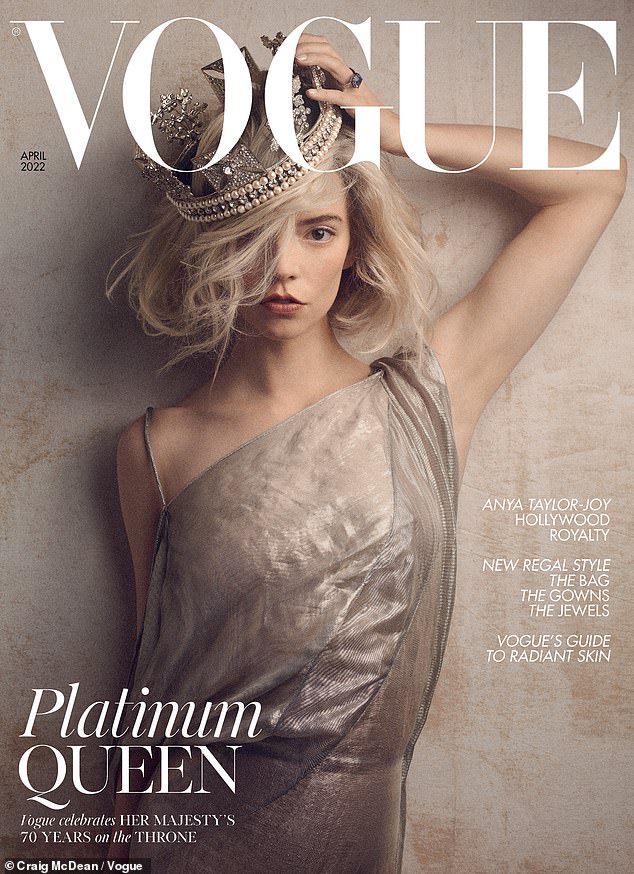 The other cover of Vogues twin-cover April edition features ‘Hollywood Royalty’, with a picture of The Queen’s Gambit actress Anya Taylor Joy 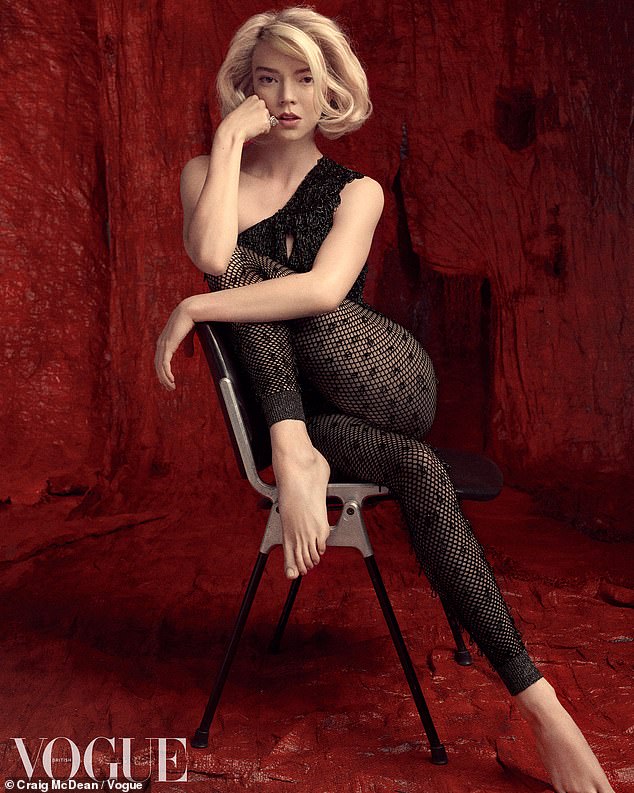 In the magazine, the actress talks about her experiences filming the hit Netflix TV program, as well as struggling with her rise to fame

The Queen’s cover is one of two special versions of the magazine – the other depicts ‘Hollywood Royalty’, featuring an image of The Queen’s Gambit actress Anya Taylor Joy.

In parallel to her Majesty’s cover image, Anya also donned a perfect replica of the George IV State Diadem, which was tilted atop her platinum locks.

Within the issue, Anya opened up about struggling with her rise to stardom during an interview with the magazine and revealed she would meditate by going clubbing at 11am while shooting Netflix hit The Queen’s Gambit in Berlin.

She revealed she would go to a club by herself while filming the show. She said: ‘[I would go] at 11:30 in the morning, dance until 8pm.

‘Not talk to anybody, then go home, have a bath, eat some spaghetti and wake up at 4am to go to work. I felt great. ‘

The April issue of British Vogue will be available via digital download and on newsstands from Tuesday March 29th.