Prince Harry and Meghan Markle have reportedly turned their backs on another friend as Jack Whitehall became the latest to have been ‘banned’ by the couple.

The comedian revealed he was no longer allowed to see the ex-royal after referring to him as ‘ginger nuts’ at the Royal Variety Performance.

The 33-year-old, who spends a lot of his time in LA near the couple, said he thinks the gag was the reason he was ‘ostracised’.

It comes after the Prince is alleged to have cut contact with some celebrities and former friends since he started dating Meghan.

Usain Bolt admitted last year they had severed ties after the Duke ‘got really serious, really quickly’ with the Duchess.

Meanwhile his Old Etonian and military mates also fear a rift brewing with the couple amid fears he will expose them in his upcoming book. 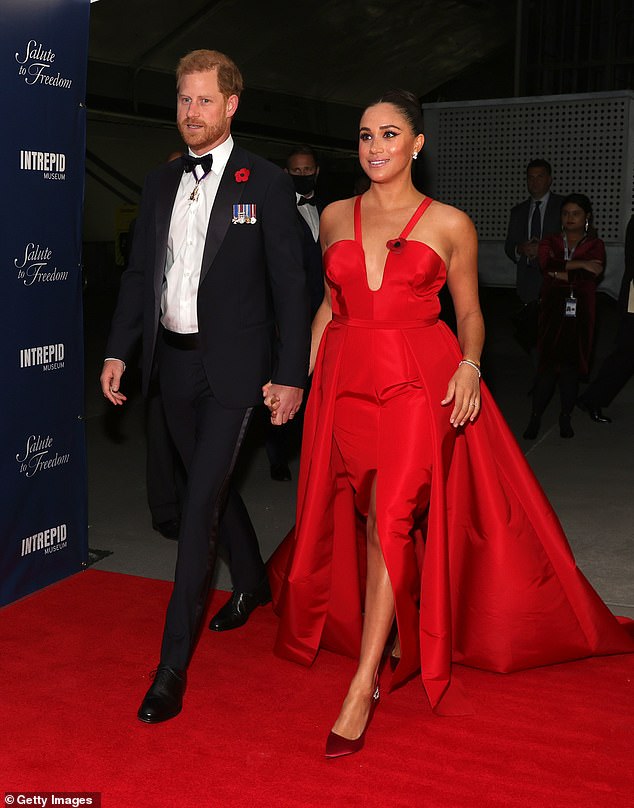 The 33-year-old, who spends a lot of his time in LA near the couple (pictured in November), said he thinks the gag was the reason he was ‘ostracised’

Jack told a crowd at the London Palladium in the West End this week he was concerned his 2015 joke had led to him being shunned.

He was appearing alongside his mother Hilary, 59, and father Michael, 81, to promote his new book How To Survive The Summer Holidays.

According to the Sun, Michael said: ‘Jack, I read a book recently and it changed my life. I put this book down and I thought I must become a writer myself. ‘

The former talent agent continued: ‘This book is called The Bench and it’s written by Meghan Markle.’

The children’s book sold just 3,212 copies when it was released in June and the former actress billed it ‘as a love letter to my husband and son’.

Michael said: ‘She presumably wrote it for Harry.’ He continued: ‘Yes darling just read it OK. There are only three lines per page Harry… Harry it’s all right. ‘ 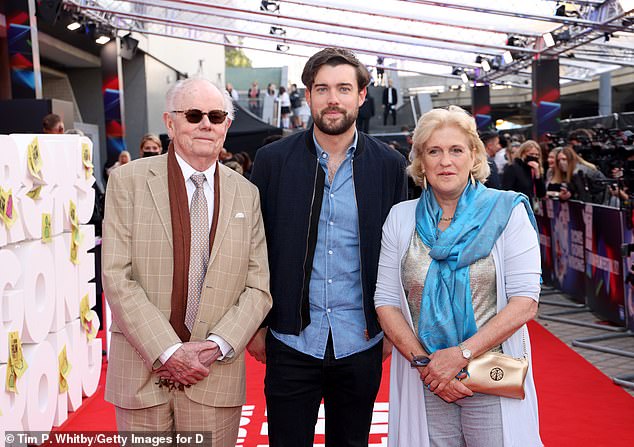 He was appearing alongside his mother Hilary, 59, and father Michael (pictured together in October), 81, to promote his new book How To Survive The Summer Holidays

He added: ‘That is your friend Harry. Except you are not allowed to see him anymore. You have banned … been ostracized from the Sussexes. ‘

Jack said: ‘I think I have been banned because I called him’ Ginger Nuts ‘at the Royal Variety.’

The funnyman told the Royal Variety Performance in 2015 – a year before he started dating Meghan – he wanted to ‘offer up his services as royal wingman’.

The pair had been friends for years due to Marlborough College educated Jack mixing in the same social circles.

But he was not invited to their wedding at Windsor Castle in 2018, despite going to Princess Eugenie’s a few months later.

Jack is not the first celebrity to have been cut from the Sussexes life – Bolt also claimed he had been shunned in recent years. 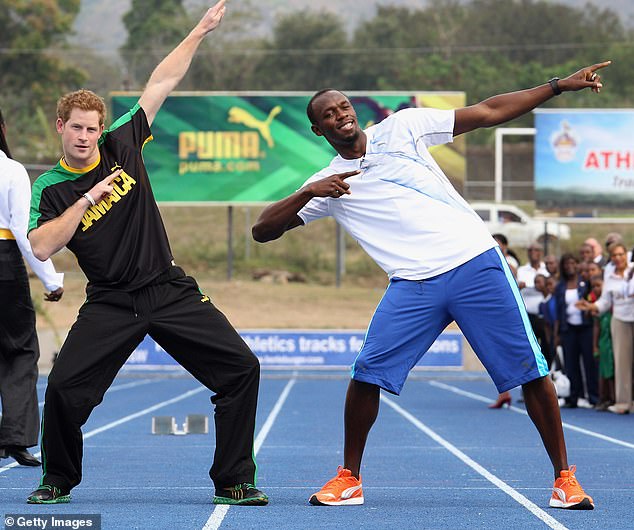 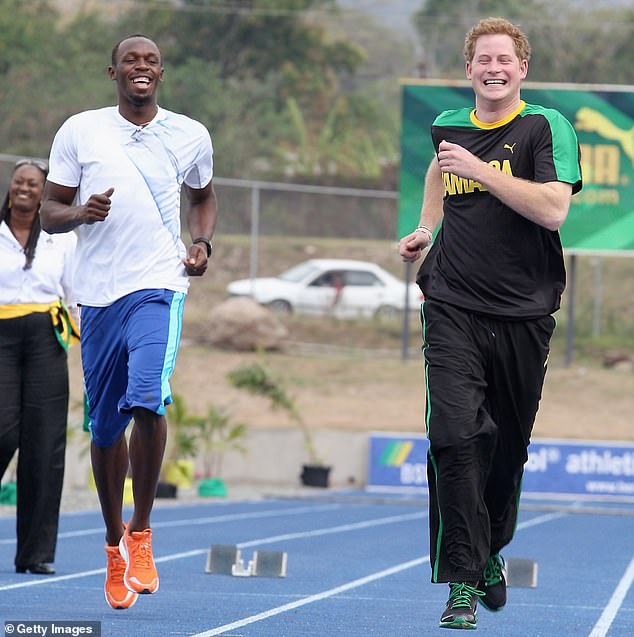 The Duke and the Olympic legend became friends when Harry toured Jamaica on a four-day visit on behalf of the Queen in 2012.

But the sprinter revealed last year he was ghosted by the ex-Royal after he met the Duchess.

He told the Sun: ‘I think he got really serious, really quickly. He is about married life and good for it now so he has left that life behind now.

‘I haven’t talked to him in a while but I still would like to keep in contact.’

Prince Harry had headed to Jamaica in March 2012 to meet the sprinter at the Usain Bolt Track at the University of the West Indies as part of a Diamond Jubilee Tour.

The pair – looking very fresh faced – posed in the sprinter’s signature lightning bolt style together before Bolt presented the royal with his own ‘Harry can Bolt’ T-shirt.

At the time, the pair joked around – and the fastest man in the world even let the prince win when they hit the track.

The two exchanged friendly Twitter messages in 2016, with Harry challenging Bolt to a re-run of the race.

And in 2017, days after Harry announced his engagement to Meghan, Bolt vowed to organize three stag dos for the royal ahead of their nuptials.

It has previously been reported the Duke’s friendship with several members of his former inner circle cooled or ended altogether after he met Meghan.

In the run up to the wedding, Harry was said to have frozen out some of his ‘old posse’ because Meghan did not want any ‘temptations’.

He and another one of Harry’s friends, PR guru Astrid Harbord, were said to have been ‘airbrushed out’.

Tom, who is a banker, was one of Harry’s childhood friends from Eton, and was considered to be his ‘wingman’.

Meanwhile PR guru Astrid Harbord, a friend of the Duchess of Cambridge, was also known to be a member of Harry’s posse, and was romantically linked to him. 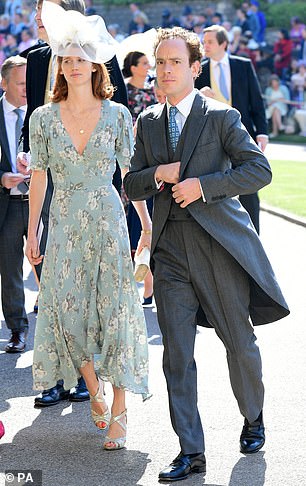 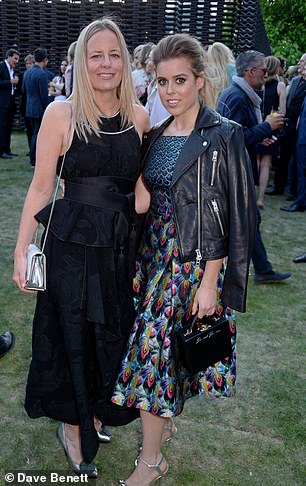 A friend told the Express: ‘Like several others who were considered a questionable influence on Harry during his bad old bachelor days, Tom has been dropped, even though he himself now has a lovely wife, Lara.’

The insider went on: ‘It’s all part of Meghan’s quiet airbrushing out of Harry’s old posse.

‘She doesn’t want temptation – of any sort – being put in his way while they concentrate on starting a family.’

Friends are also concerned the Duke will drop them in it when he publishes his book this year.

Harry of his older friends are worried it could cause them huge embarrassment and some have warned they are ready to dish the Royal dirt if his book exposes them.

The Duke and Duchess agreed a lucrative four-book deal, including the Prince’s memoir, for a figure possibly close to £ 29million.

There is concern in the royal family the release of one of the books is reportedly due to come after the death of the Queen.

Harry’s book deal deal has rattled some of his chums who fear unwanted revelations could be the final insult after years of them refusing to gossip about him (pictured serving with the army in Helmand province, Afghanistan, in January 2008)

Harry’s lawyers said the claim he is waiting for his grandmother to pass away before releasing one of the books is ‘false and defamatory’.

The deal has rattled some of Harry’s chums who fear unwanted revelations could be the final insult after years of them refusing to gossip about him.

A friend said: ‘It feels very hypocritical given Harry chucked people out of his friendship group for talking to the press.

‘There is a fear that he’s going to reveal details of his hedonistic youth which some worry will play havoc with their careers and personal lives.’

Another pal said ominously: ‘Harry’s mates have remained loyal to him… so far.’

As Harry has said he will recount ‘experiences, adventures, losses, and life lessons’, friends fear that it might paint them in a bad light.

A source said: ‘If Harry slams any of his old school and military buddies in his new book they have pledged to break ranks to tell their story.’

Harry’s lawyers said: ‘The Duke is not waiting for his grandmother to pass away before he writes a second book; there is only one memoir planned by the Duke and that will be published next year; publishers did not fly to the US; the publishing deal was not negotiated personally by the Duke, and the figures are inaccurate; he did not personally bring a ‘package’ to the table. ‘