The Queen’s attendance at The Duke of Edinburgh’s memorial service will happen without ‘drama or grand gestures’, but will be very ‘tightly managed’ behind the scenes, royal sources have claimed.

Prince Philip’s memorial service will take place at Westminster Abbey on Tuesday and will serve as a reminder of his ‘dedication to family, nation and Commonwealth’,

It will see a host of senior royals from Britain and Europe gather to celebrate the Duke’s life, however the palace is yet to confirm whether the 95-year-old Queen will be present, with a source saying this week that she still ‘hopes to wait ‘.

According to the Evening Standard’s royal editor Robert Jobson, there are meticulously organized contingency plans to get Her Majesty to the service with minimal fuss, if she is up to it on the day.

The palace is yet to confirm whether the 95-year-old Queen will be present at the Duke of Edinburgh’s memorial service, with a source saying that she still ‘hopes to attend’ 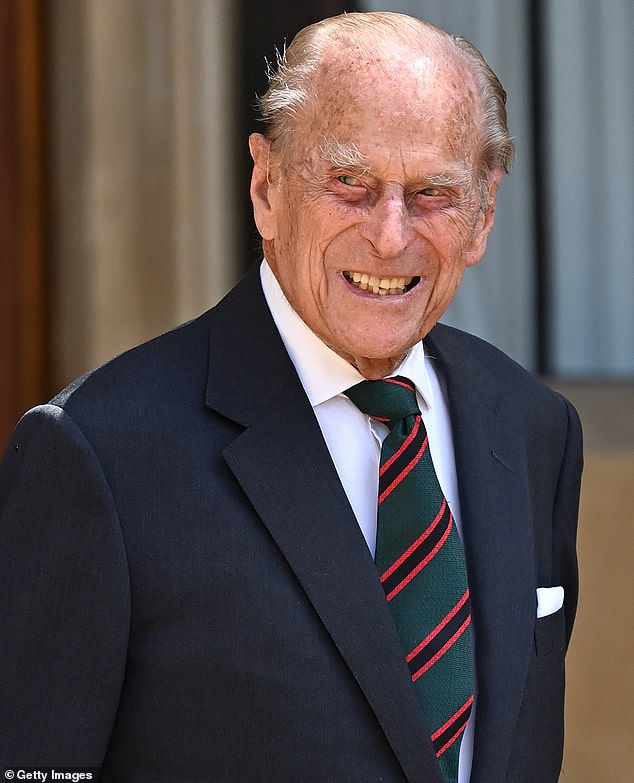 Prince Philip’s memorial will be a no-frills affair without ‘drama or grand gestures’ but will be very ‘tightly managed’ behind the scenes, a royal courtier has claimed

‘There will be no drama, no grand gestures – but behind the scenes it will be very tightly managed,’ one former long-standing courtier told the royal editor.

In the wake of Her Majesty’s mobility issues, Buckingham Palace said the monarch will only be attending significant events – something Robert suspects is palace advisers ‘trying to manage expectations’.

The editor said that Philip’s death in April, aged 99, marked a ‘sea-change’ for Prince Charles, who has since become the ‘paterfamilias’ of the Royal Family and has taken over some of Her Majesty’s duties.

The Duke and Duchess of Cornwall are currently on a four-day visit to Northern Ireland after the monarch was forced to cancel her visit in October last year on medical grounds. 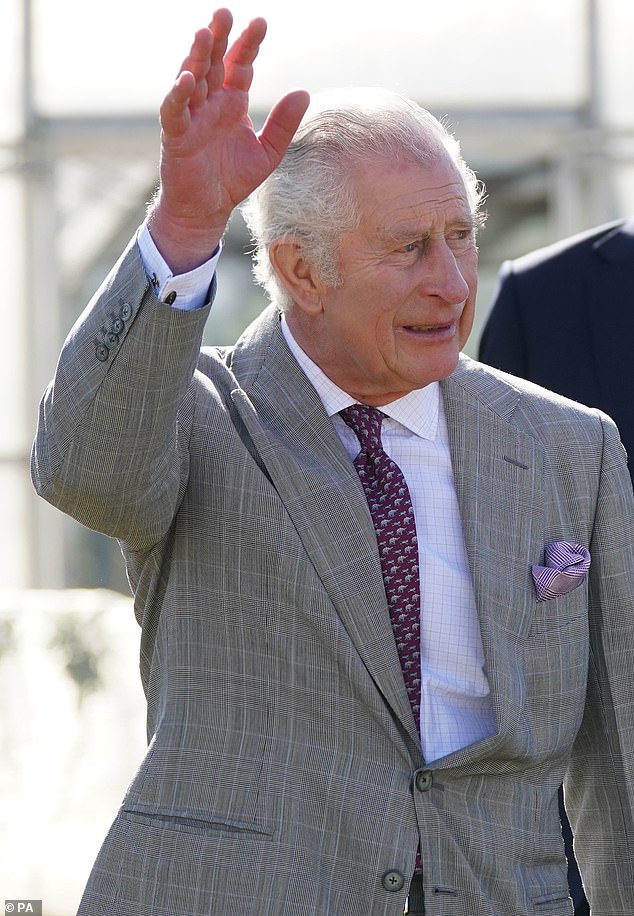 It is understood that Charles, 73, and Camilla, 74, will be in attendance at Philip’s memorial service alongside the Duke and Duchess of Cambridge, the Princess Royal and husband Vice Admiral Timothy Laurence, and the Earl and Countess of Wessex are all thought to be in attendance.

It’s likely the Queen and Prince Philip’s other grandchildren will also attend, including Princess Beatrice and Edoardo Mapelli Mozzi, Princess Eugenie and her husband Jack Brooksbank, Zara Tindall and her husband Mike and Peter Philips.

Others from his funeral guest list to attend the memorial could include the Queen’s first cousins ​​Princess Alexandra, the Duke of Gloucester and the Duke of Kent, who loyally supported the monarch and Philip by carrying out royal duties over the decades.

The children of the Queen’s late sister Princess Margaret – the Earl of Snowdon and Lady Sarah Chatto and her husband David Chatto – may also be in attendance.

The Mail on Sunday understands that her Majesty has ruled out the option of using a wheelchair if she decides to attend the service and remains determined to continue to walk for as long as possible.

This is despite the monarch reportedly being too frail to walk her beloved corgis over the last six months.

The Queen, who turns 96 next month and has recently recovered from Covid, was pictured yesterday using a walking stick and mobility issues remain at the heart of a ‘regretful’ decision taken late on Friday to pull out of the annual Commonwealth Service, which is usually a highlight in her calendar.

Detailed plans are being configured to find a way in which the Queen may comfortably attend the service for Philip, Britain’s longest-serving consort and the beloved husband she once referred to as ‘my strength and stay’.

The thanksgiving service has already been cut down to a relatively brief 50 minutes and to save the Queen from the long walk down the aisle to reach her seat, a side door may be deployed. Yet even that may prove too much. 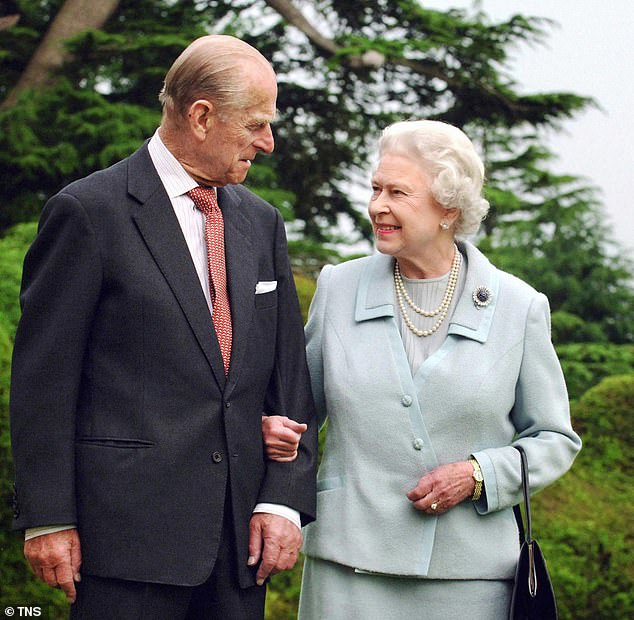 Penny Junor, a royal biographer, said: ‘The Queen is extraordinary. She has gone on with great vigor for years but we have to remember she is 95 and not superhuman.

‘In other respects, she is on great form. The Queen is fantastic on Zoom calls, but I think events where she is required to walk or go up any steps are not going to be feasible any more.

‘And fortunately we have the technology that means she is not going to disappear from view altogether.’

But reports said she has been unable to walk her corgis over the last six months and there are fears she may never again. A source told the Sun: ‘lei She is not well enough.

‘The Queen usually turns to her beloved corgis in time of crisis and stress and took them out almost every day after Philip fell ill and then died last year. They are an enormous source of solace, so it is a real shame. ‘

Last month, while receiving the incoming and outgoing Defense Services Secretaries, the Queen quipped: ‘I’m here. Good morning. Well, as you can see I can’t move. ‘ 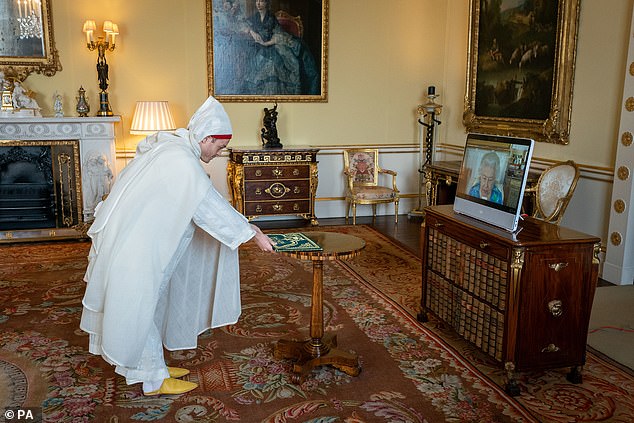 The Queen has not appeared at a formal public engagement since October 19. Today she held a virtual audience today from Windsor Castle to receive the ambassador of Morocco to the UK, Hakim Hajoui and Mrs Lamia Amorat Buckingham Palace

She gestured at her feet before shuffling forward slightly to greet the pair. A Palace source later said her comments by lei referred to feeling stiff rather than being unwell.

The Queen has not appeared at a formal public engagement since October 19.

Yet she has carried out numerous video calls and held a virtual audience today from Windsor Castle to receive the ambassador of Egypt to the UK, Nasser Kame and Mrs Heba Ismail at Buckingham Palace.

It seems increasingly unlikely, however, that she will make many appearances during this summer’s Platinum Jubilee celebrations.

A Palace source said: ‘Unlike previous jubilees, the Queen won’t be at every event, but she will be at the significant moments.’