A father-of-three has transformed his previously damp and unused basement into a rustic bar that can hold up to 30 guests.

The 34-year-old says that 80 per cent of the materials he used were reclaimed and the total project cost him £ 2,500 which included a double fridge, a beer pump, lighting and some of the other fixtures and fittings that he couldn’t get for free.

Adam, an excavator operator, added: ‘It was a wasted space that was full of damp.

‘It wasn’t useful for storage because things would get ruined.

Adam Cone, 34, spent nine months transforming his dank and unused basement into a social hotspot for his family and friends 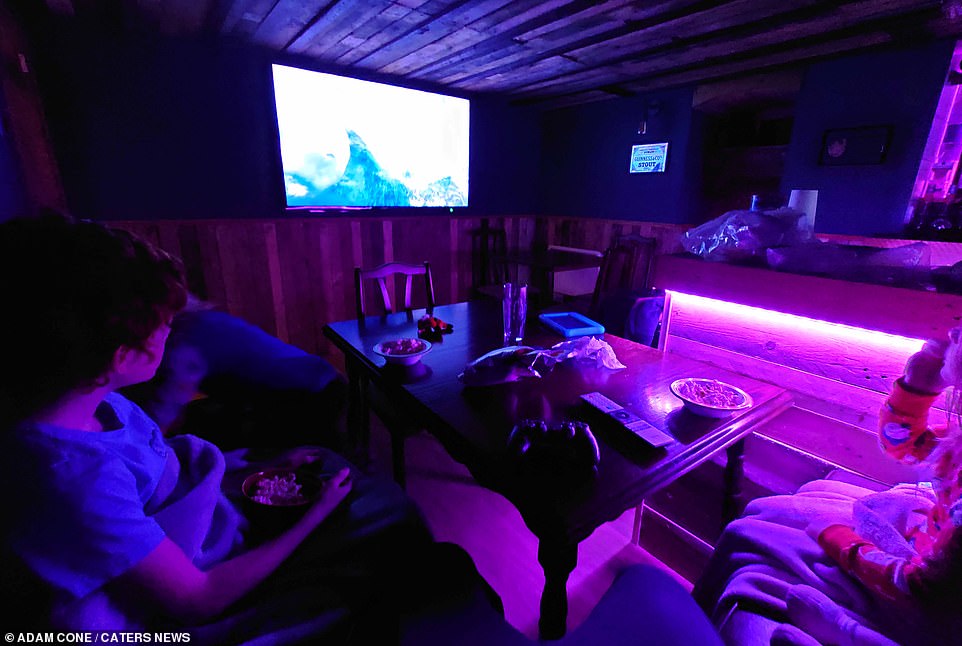 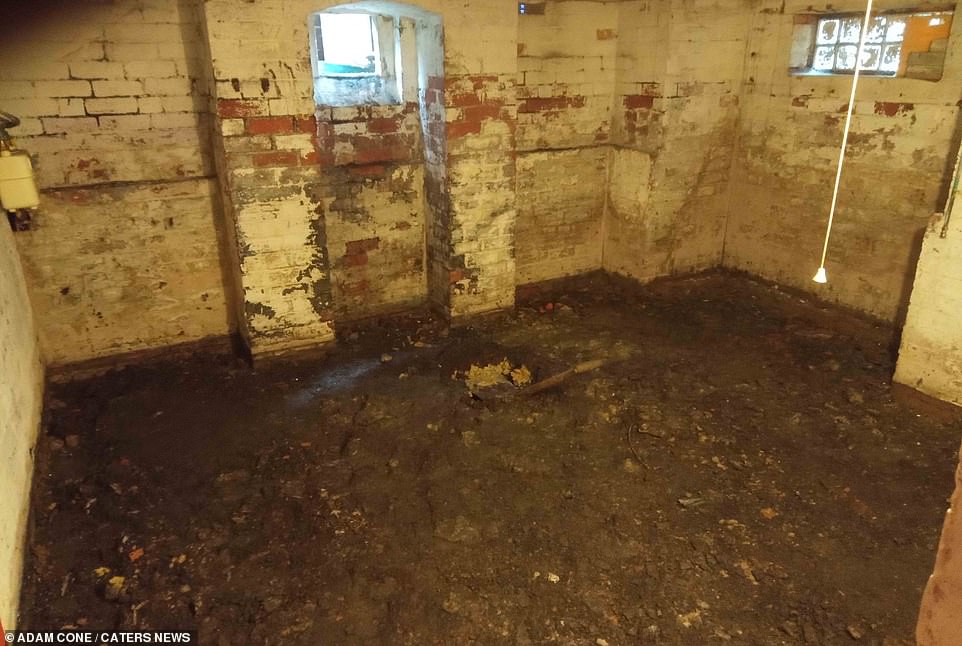 Before its miraculous makeover, the space was full of damp and not even useful for storage, as things would accumulate moisture and mold 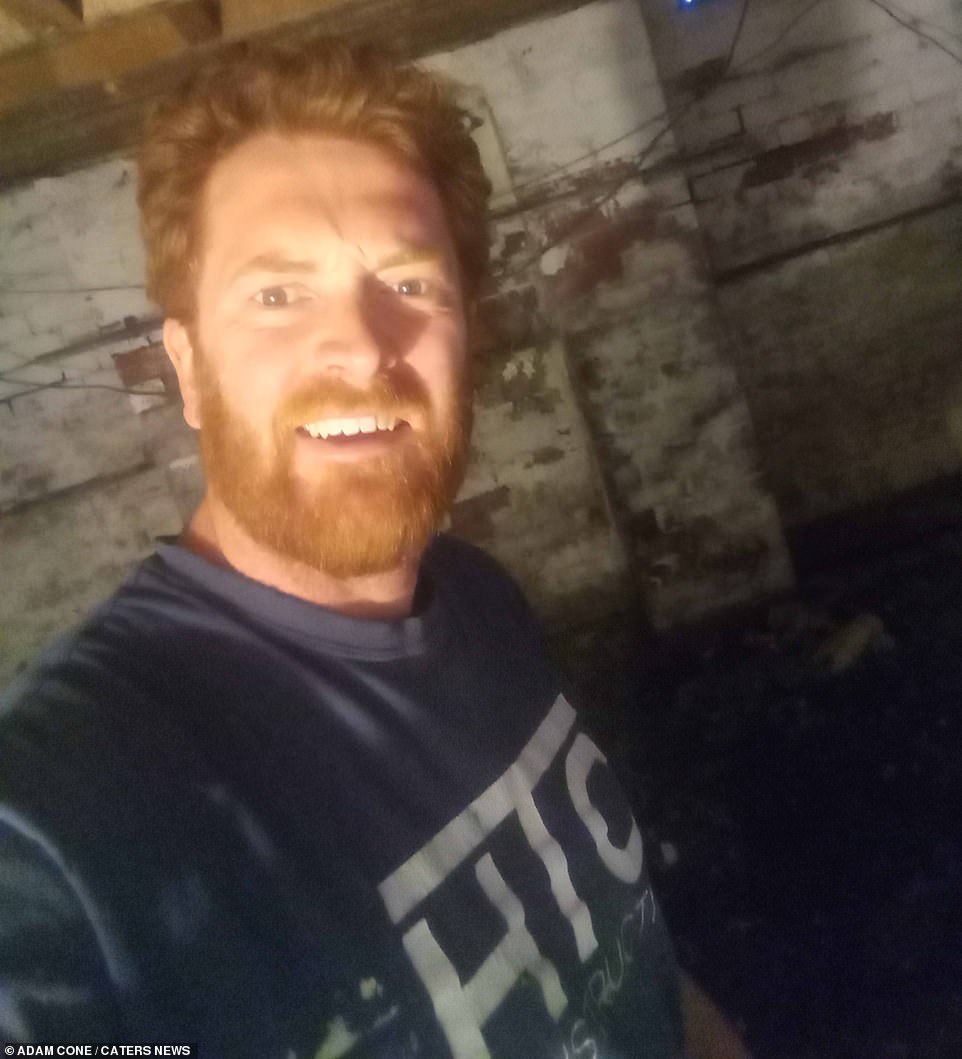 Adam, from Sheffield, said he had only spent £ 2,500 doing up the basement, splashing out on a double fridge, a beer pump, lighting and some of the other fixtures and fittings that he couldn’t get for free

‘We enjoy having family and friends around at our house so it made sense to make something to host guests but also a clean and cozy place for the family to spend time.

‘I’d say the bar has a rustic and cozy atmosphere with a mix of traditional and industrial elements.

‘I used a lot of timber that I got from work, old pallets and items that I found on the Facebook marketplace.

‘All the tiles were free and other bits we used were extremely cheap, such as the door and flooring which we got from Facebook.

‘Other people chipped in to help us out too.

‘My dad helped with digging out the floor which had to go down nearly two-foot because we needed to gain enough headroom to stand up as I’m 6ft 4inches. 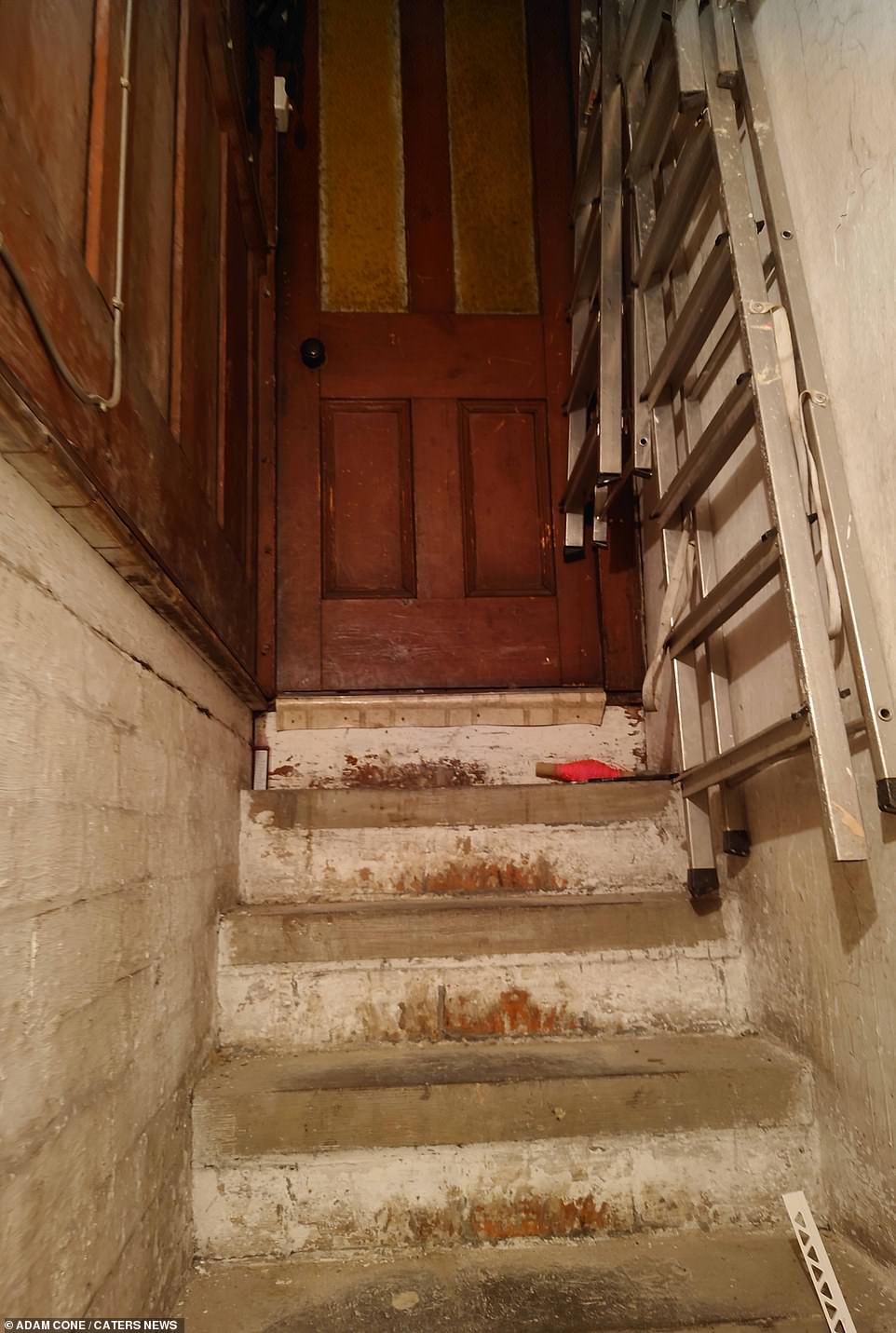 Cold, stone steps led the way down to the basement before the extensive renovation work filled the area with warmth and life 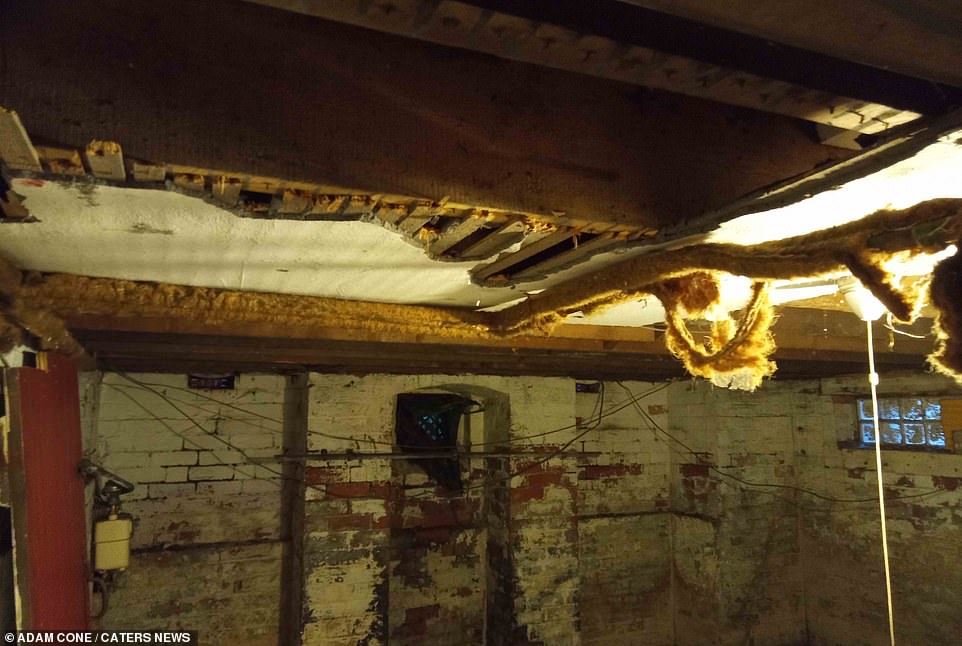 The ceiling boards had to be removed during the job, during which Adam got lots of help from friends and family 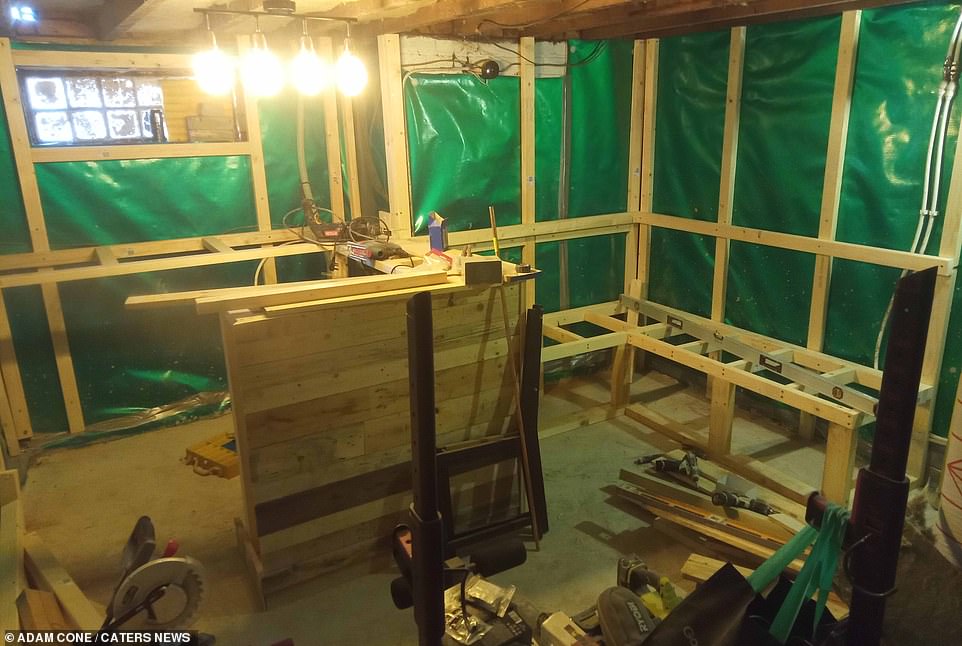 The internal structure was built using discarded timber from Adam’s workplace, with other bits and pieces being picked up cheaply using online marketplaces 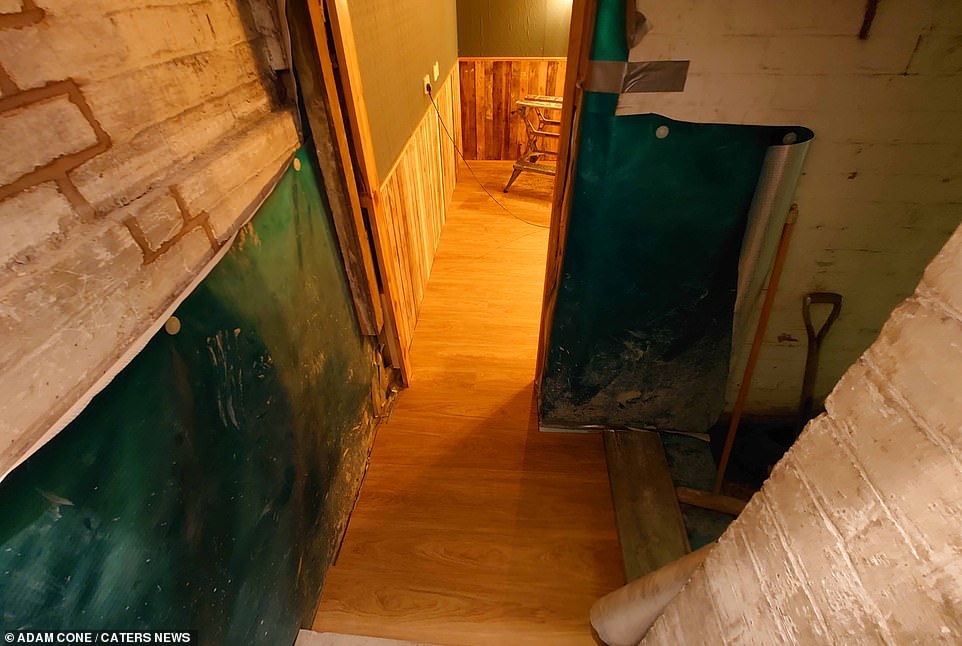 Adam, who is 6’4, had to dig down nearly two feet to allow adequate standing space in the room 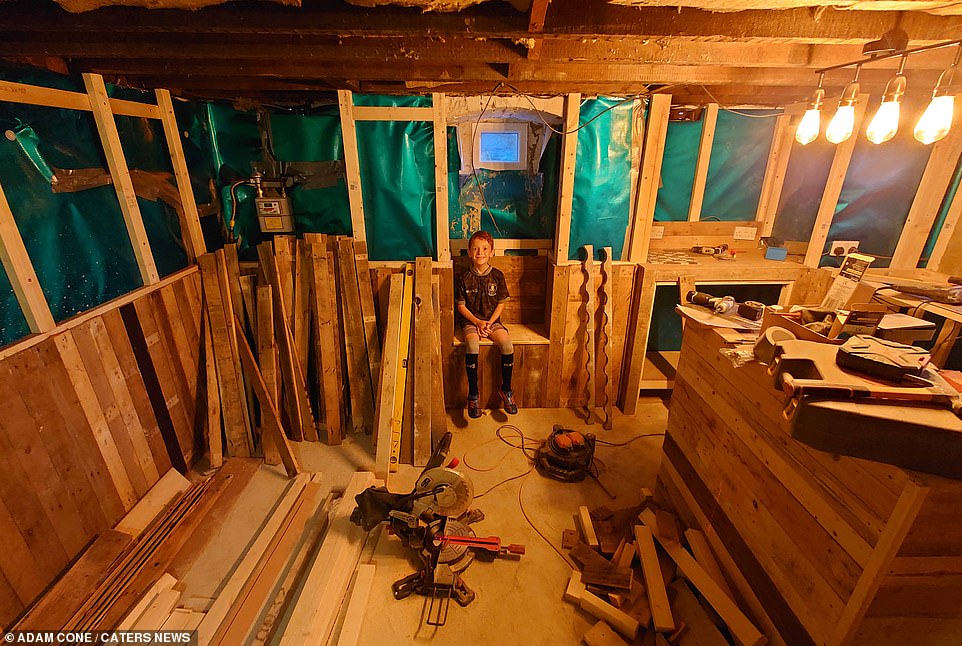 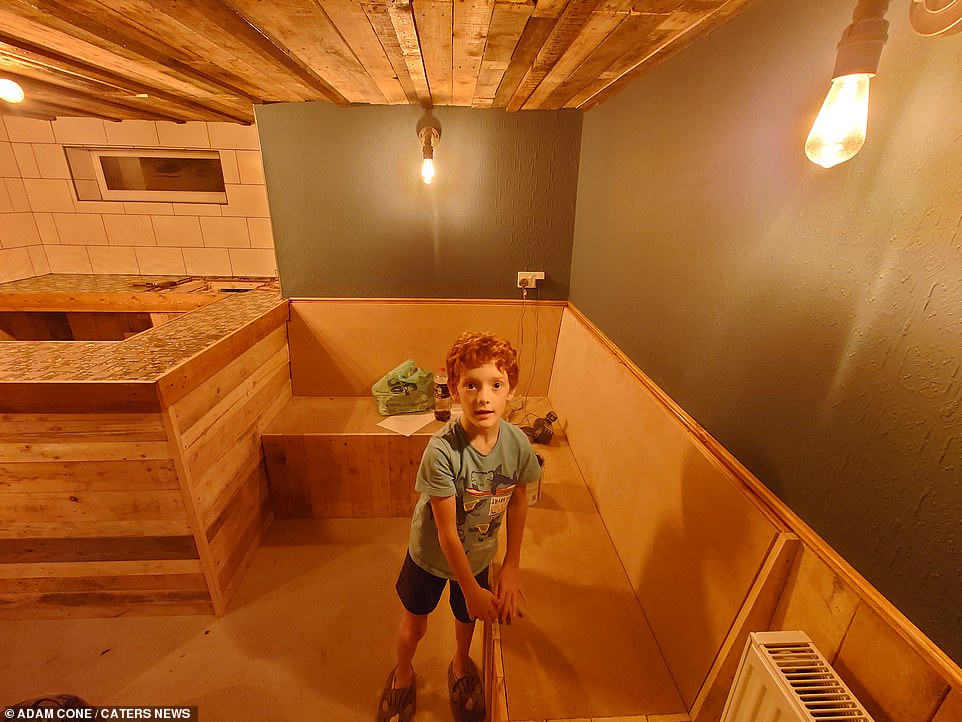 Joseph, 8, and his four-year-old sister Amelia lent their father a hand by carrying bricks out from the original floor to be recycled into a new patio outside 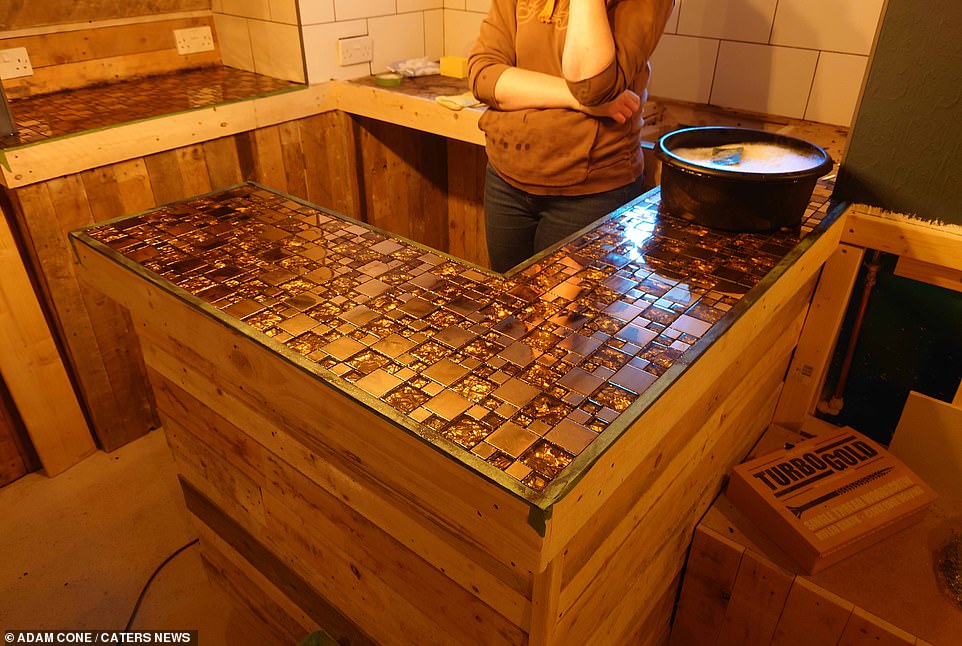 ‘The children were there to help too.

‘My son and eldest daughter carried bricks out from the original floor to be recycled into a new patio outside.

‘And a few friends also helped get the concrete in to make the new concrete slab for the floor.’

Adam says that he has always been a DIY enthusiast and used his existing skills to complete the project.

However, he has also learned some new techniques such as how to source materials for as little as possible because he admits that he is usually one to just buy without looking at the price. 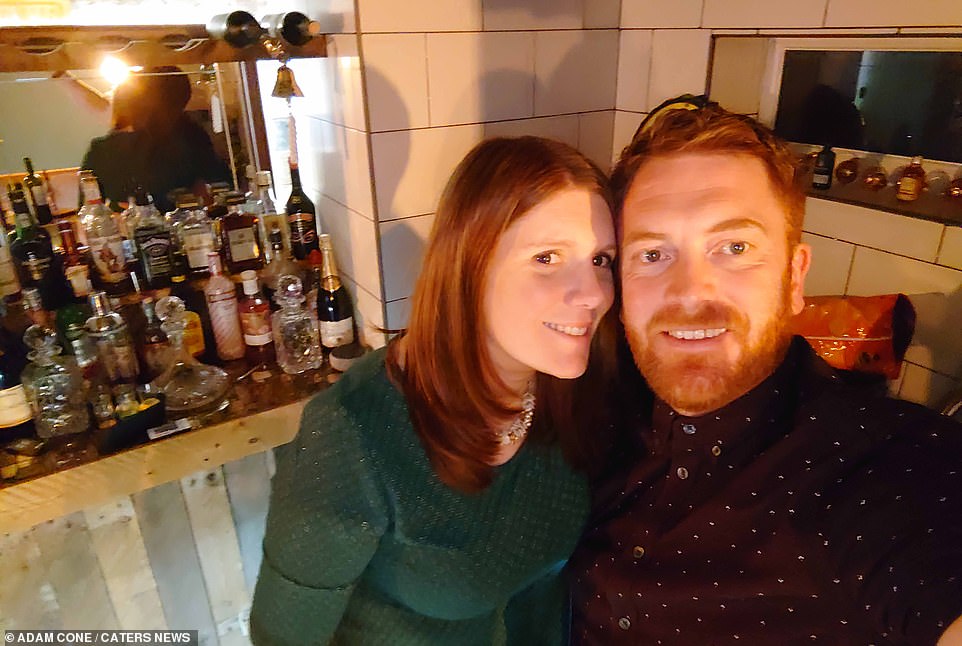 Adam’s wife, Ruth (pictured), threw a raucous party in the newly renovated space with around 30 guests turning up to nose around the underground bar 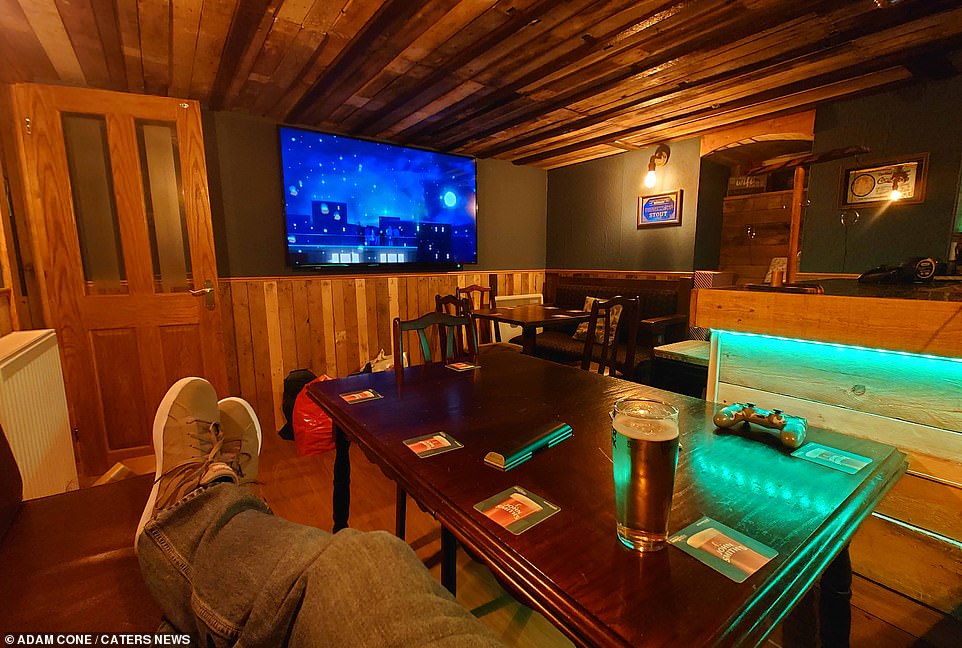 Adam’s mother-in-law upholstered the chairs, while one of his friend’s got their father to upholster the corner seat 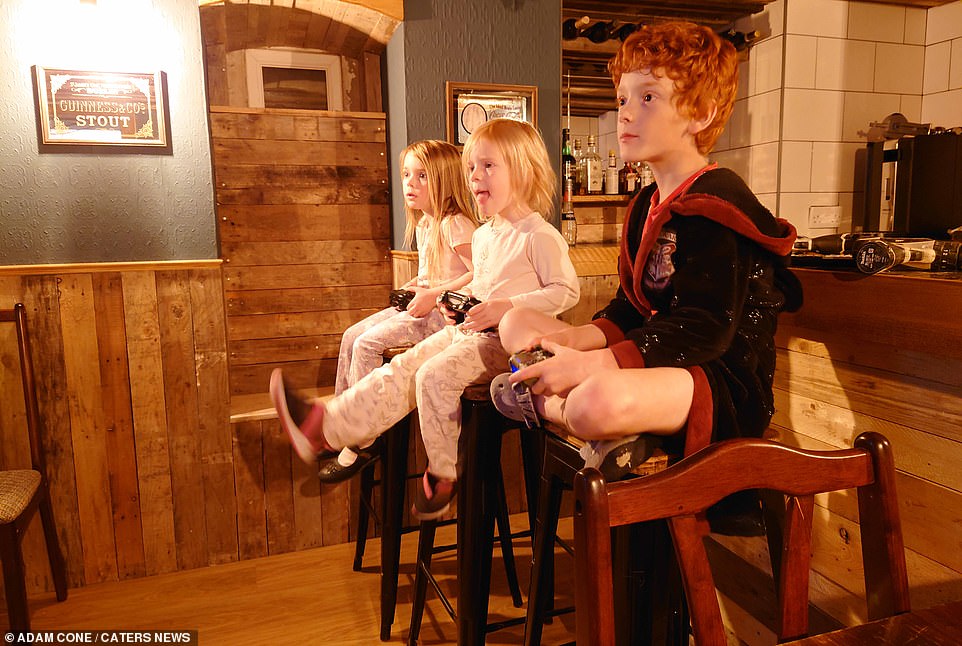 Adam said: ‘The bar has given us a brilliant family room where we have already enjoyed numerous birthday parties, film nights, game nights and family quizzes without even leaving the house.

‘My son, Joseph, had part of his birthday party down there last week and Ruth, my wife, had hers in there over Christmas with about 30 guests down in there at the same time !.’