YouTube has started streaming more than 4,000 television episodes and hundreds of movies, including the shows Hell’s Kitchen and Heartland, as well as movies like The Sandlot, Legally Blonde and There Will Be Blood.

All of these titles will be on the company’s website for free in the US – though customers wanting to stream them will have to watch advertisements.

This is the latest move from the Google-owned social video giant, as it tries to compete in an increasingly crowded and competitive streaming market.

The programs will be accessible via YouTube using smart televisions, mobile devices or web browsers.

The move also comes just as Google – which is another company owned by parent Alphabet – confirmed it would stop selling television shows and movies through its Play Store, leaving it with only apps and games.

YouTube has started streaming 4,000 television episodes, from shows including Hell’s Kitchen and Heartland, on its website for free in the US

YouTube faces an array of competitors, from streaming service Netflix – a subscription-based service – to ad-supported offerings from newcomers Peacock, Roku, and Tubi.

Outside of its TV and movie offerings, which includes the sale of recently released films and big budget television shows, YouTube is also facing competition from the likes of TikTok and Instagram for creator-produced content.

YouTube has also moved into ‘shorts’, with short-form videos produced by creators, to compete directly with the likes of TikTok, Snapchat, and Instagram’s Reels. 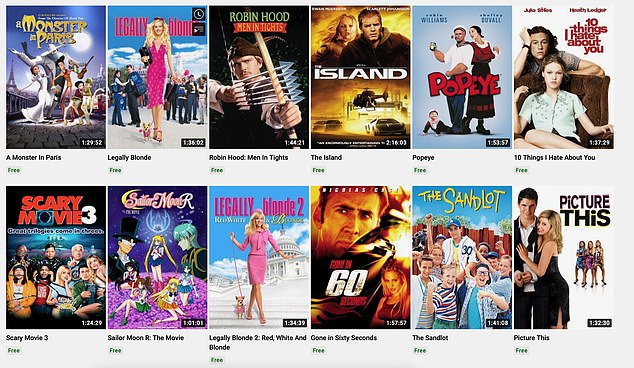 This is the latest move from the Google-owned social video giant, as it tries to compete in an increasingly crowded, and competitive market

The latest addition comes in the form of the new advertising-supported films and TV shows, including the likes of Sanctuary, Doctor Finlay and Stingray.

Films and shows will be added weekly, with the line-up of movies to also include ‘Gone in Sixty Seconds’ and ‘Runaway Bride,’ according to the YouTube team.

YouTube cited Nielsen findings that more than 135 million people in the US watched YouTube videos using televisions connected to the internet in December of last year.

‘YouTube is at the forefront of the consumer shift to (connected TV) viewership as the top ad-supported streaming platform,’ the video-sharing platform said in a post. 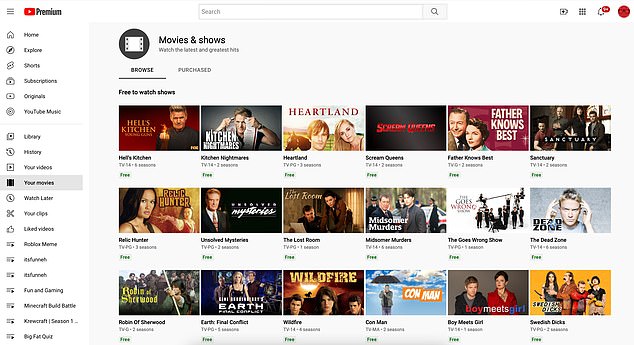 The latest addition comes in the form of the new advertising-supported films and TV shows, including the likes of Sanctuary, Doctor Finlay and Stingray

The firm has been trying to cement itself as platform for original high quality content, including through its now largely abandoned Originals strand.

Its biggest hit was the Karate Kid follow-up series, Cobra Kai, which has since moved to Netflix, where it has a bigger budget and higher profile.

YouTube has also seen a number of its creators go on to have shows with other streaming platforms, and television networks. 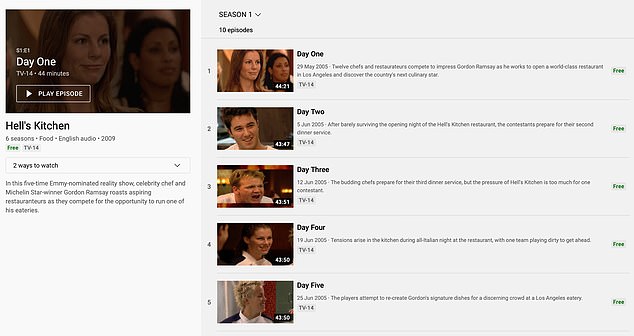 Films and shows will be added weekly, with the line-up of movies to also include ‘Gone in Sixty Seconds’ and ‘Runaway Bride,’ according to the YouTube team

Including the Try Guys, a comedy group that started out with Buzzfeed making short-form videos. They are producing a cookery series for the Food Network.

Google seems to have been distancing itself from the Play Store brand recently, first removing it from Rokus and other smart TV platforms, and now striping it of TV.

According to a message shared by Google Play Help, the firm is shutting down the TV and Movie content section in May, with the Google TV app picking up the slack.

YouTube already offers a number of TV shows and movies available for purchase, and with these new ‘free shows’, it could be that Google is focusing its content energy on YouTube, rather than the Play Store brand.