Chaos erupted outside Swatch in London’s Carnaby Street after customers fought to get their hands on the highly-anticipated MoonSwatch.

The disorder broke out after it was reported that customers who had arrived late attempted to cut the queue and force their way in past those dedicated fans who had waited outside overnight.

The disruption meant Swatch was forced to close early citing unmanageable crowds which left some fans walking away empty handed despite waiting hours.

It comes as long lines began to form outside of Swatch branches in London, Edinburgh, Delhi, Melbourne, Rotterdam, Bologne and New York, to name a few, on Saturday as shoppers tried to get their hands on the new release from the Swiss watchmaker .

The frenzied shopping has been sparked by the release of the budget MoonSwatch – a long-awaited collaboration between Swatch and Omega.

The highly-anticipated timepiece went on sale this morning with a price tag of £ 207 but is already on eBay for more than £ 3,000.

The MoonSwatch is an affordable take on the famous collector’s favorite Speedmaster Professional – also known as the Moonwatch because it was the first watch worn by an astronaut walking on the Moon during the Apollo 11 mission in 1969.

Customers congregate at the doors to the Swatch store on Carnaby Street, central London, in a bid to get their hands on the newly-released MoonSwatch – a highly anticipated collaboration between Omega and Swatch which went on sale today 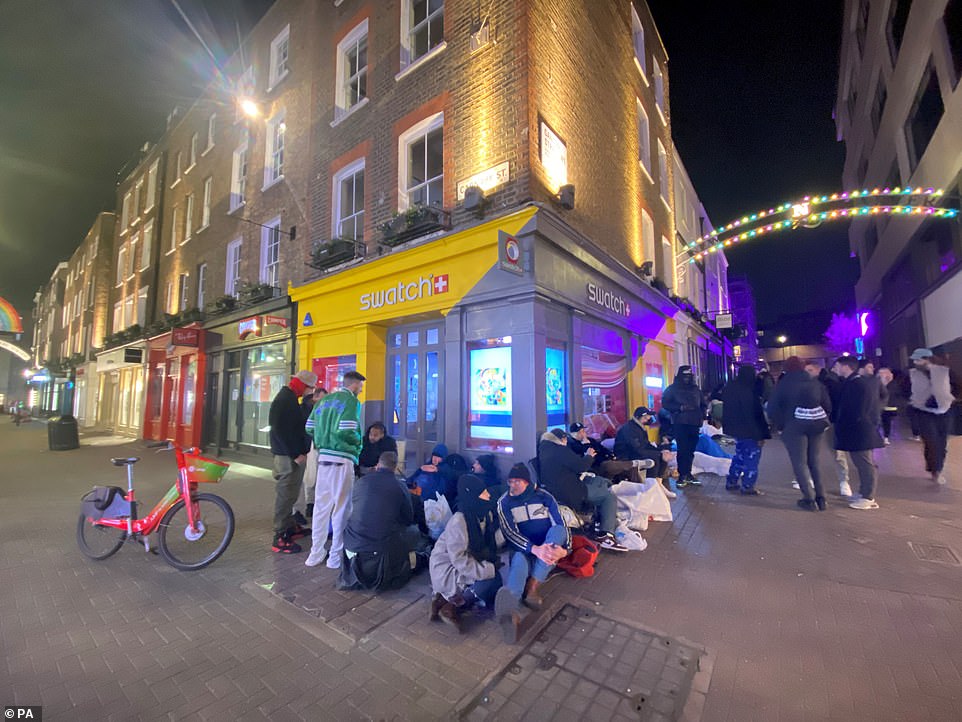 People camped out overnight outside the Swatch store in Carnaby Street London, to ensure they got their new MoonSwatch 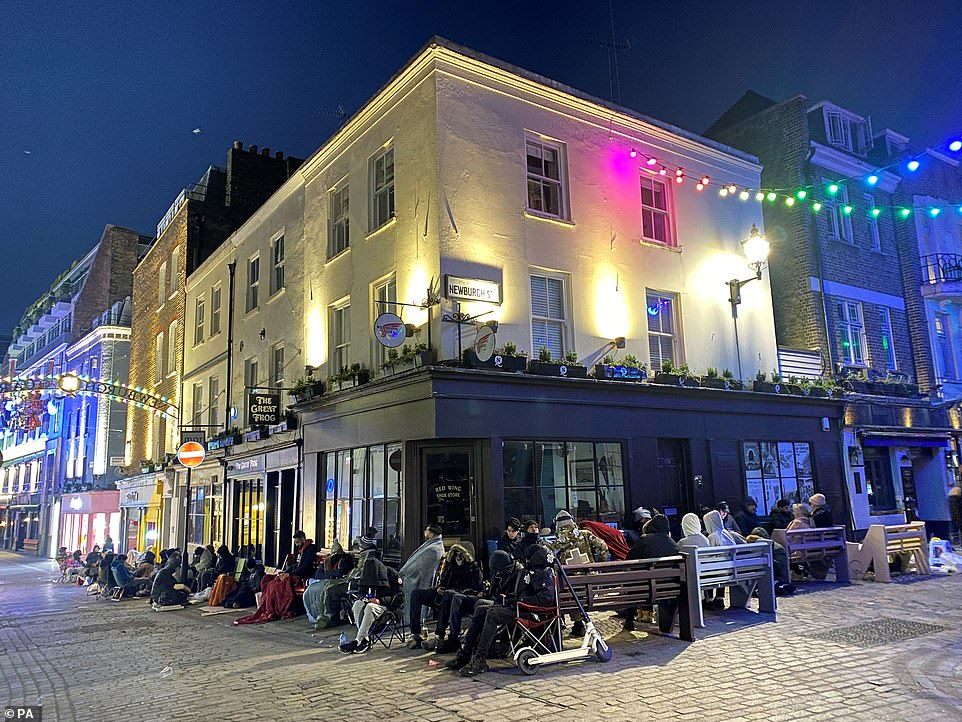 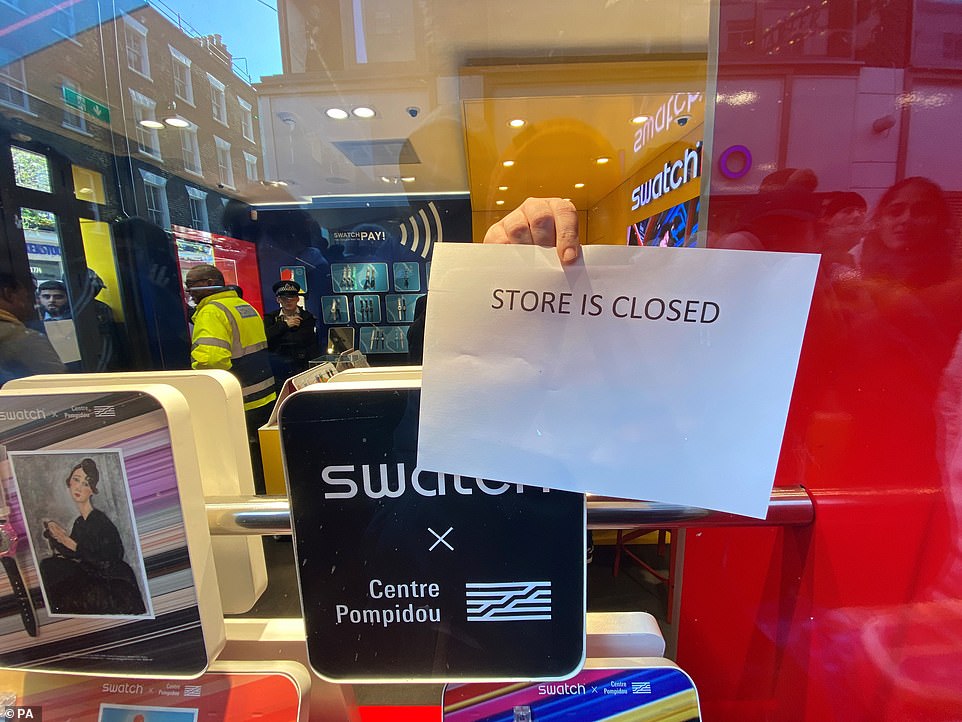 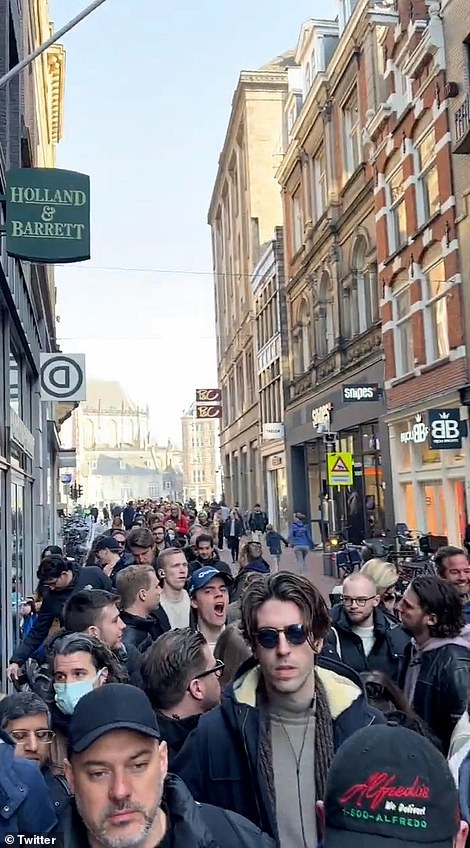 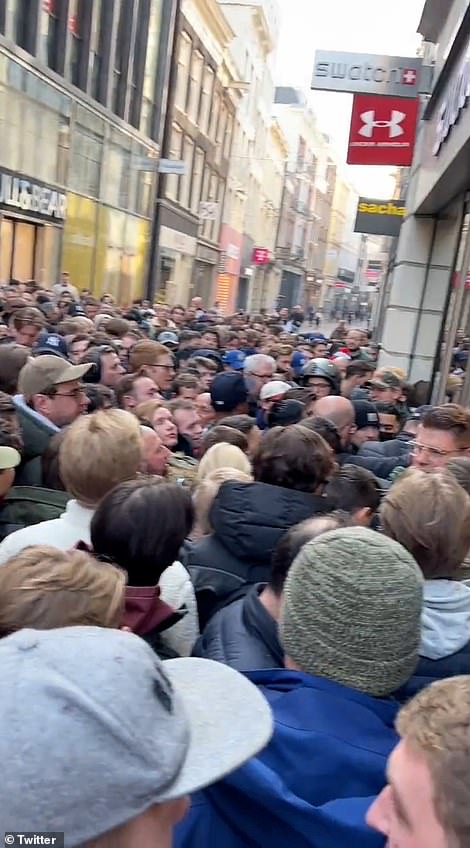 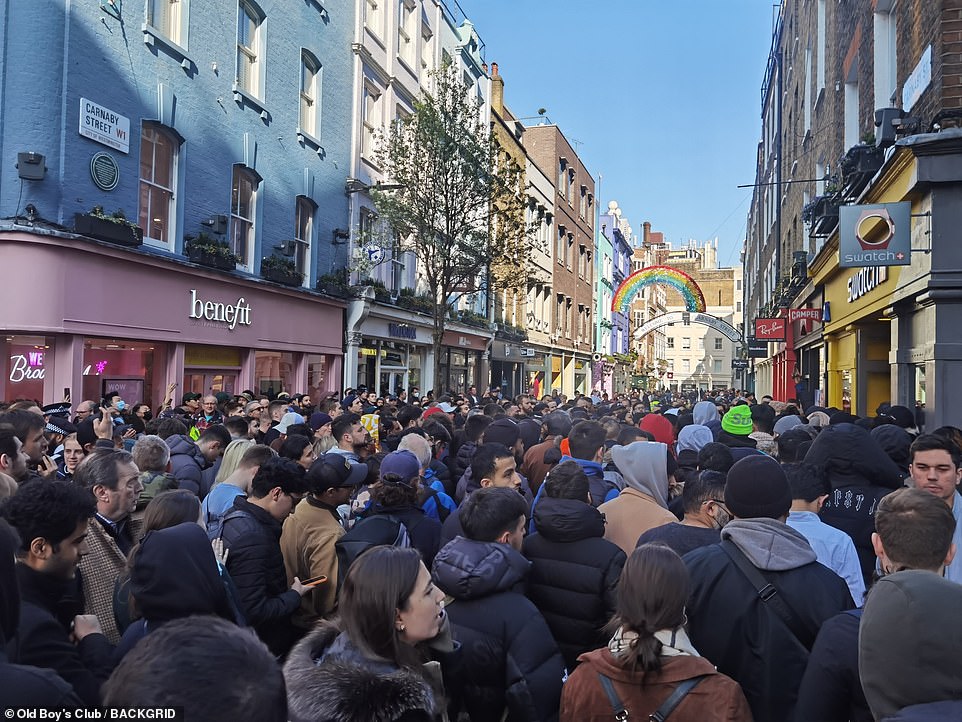 Pictured: Swatch in Carnaby Street, London, was forced to close their doors early after crowds got out of control

The iconic brands say they collaborated in a bid to deliver ‘the best of both words’ between luxury and affordability – with the MoonSwatch coming in at £ 207 while the original model will easily set you back £ 5,000.

The brands say they have drawn their design inspiration from space, to create a collection of eleven Swatch models named after planetary bodies, ‘from the giant star at the center of the solar system to the dwarf planet at its periphery’.

The watch features all the key design elements that the original Moonwatch has including the asymmetrical case, the famous tachymeter scale with the dot over ninety and the distinctive Speedmaster subdials.

The companies sent watch collectors into a frenzy on Thursday when they announced the design collaboration and queues formed outside selected branches across the world this morning as fans were desperate to get their hands on a piece.

Photos showed queues snaking through streets across the world while police officers were deployed to some branches to help manage the crowds. 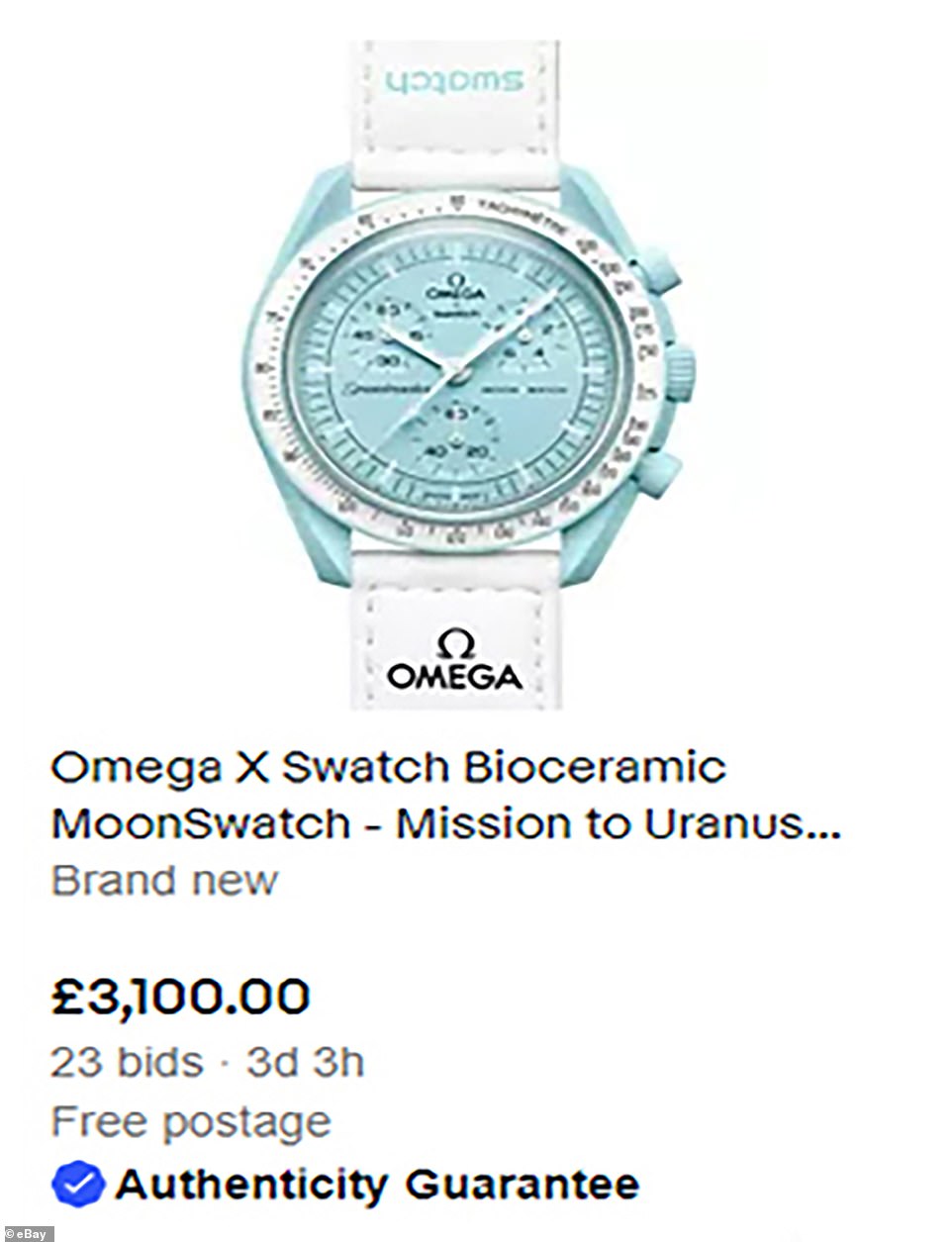 Pictured: The watches were released on sale this morning and are already selling for more than £ 3,000 on eBay 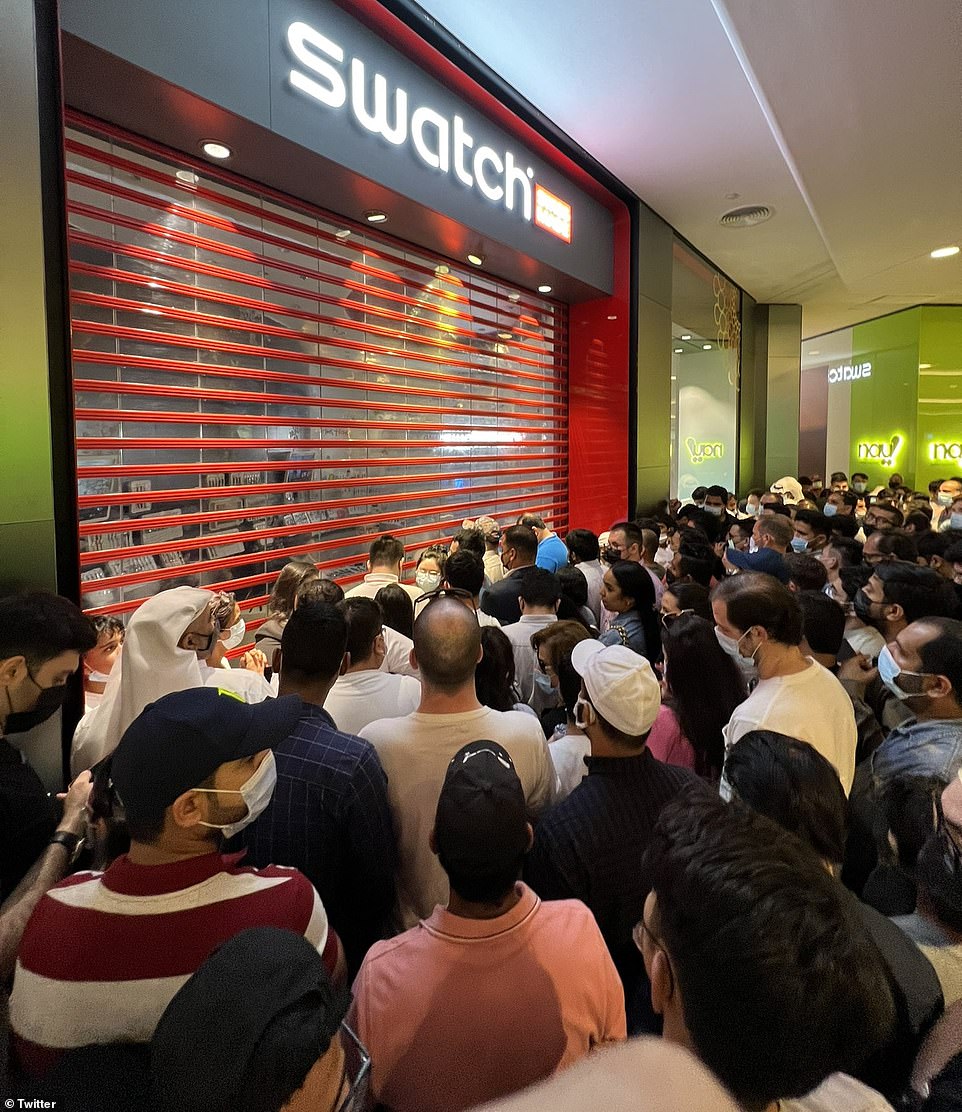 The new MoonSwatch was launched today and fans were queuing before shops opened their doors. Pictured: Dubai store 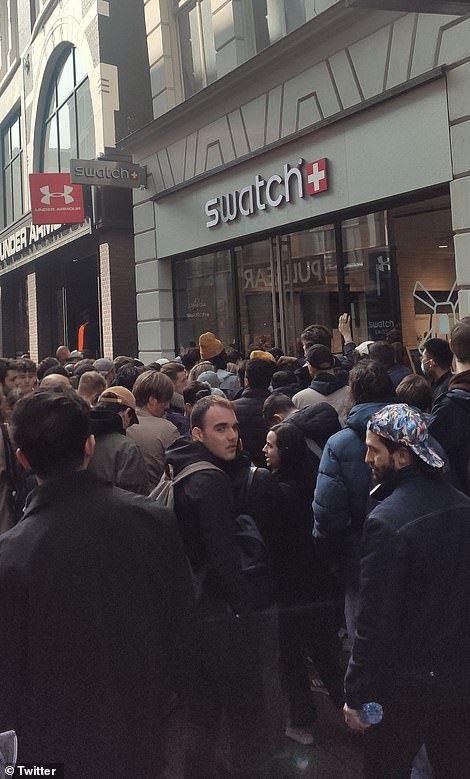 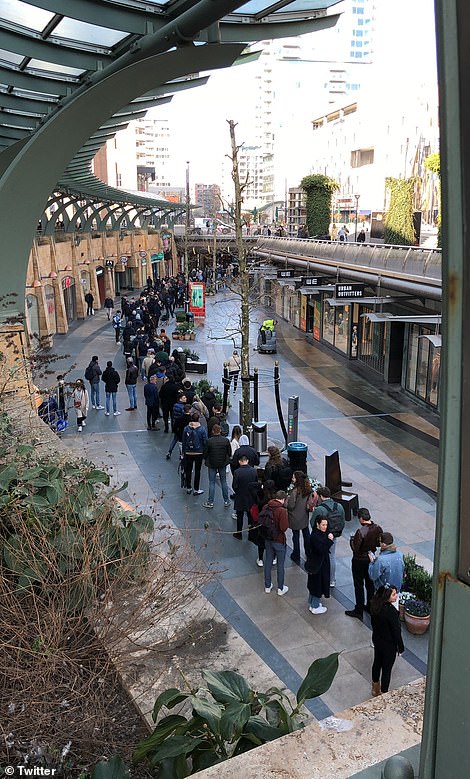 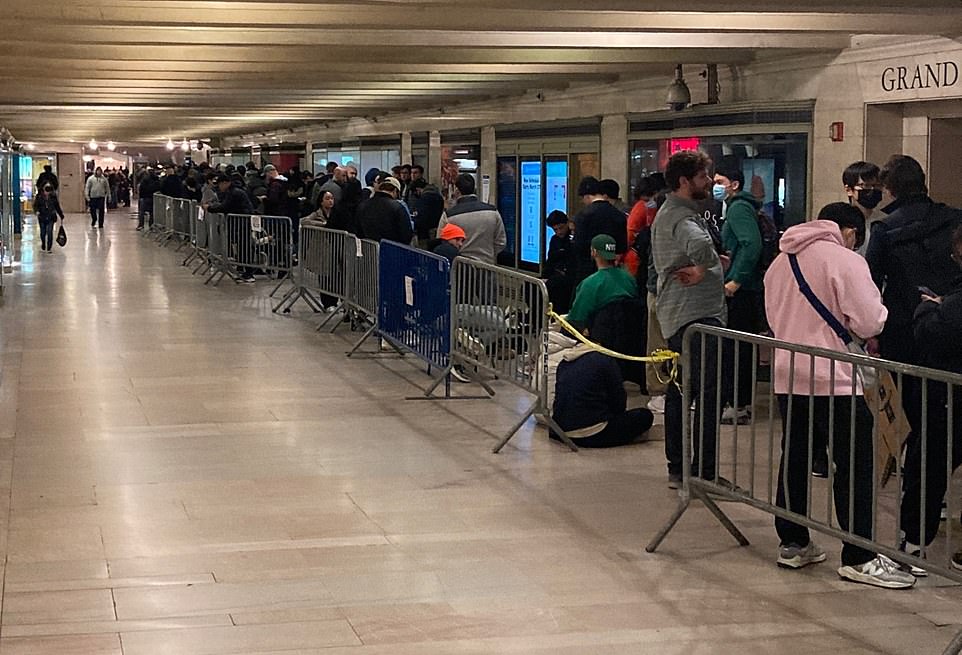 In New York City, the Swatch branch in Grand Central Station were prepared with barriers for the expected queues 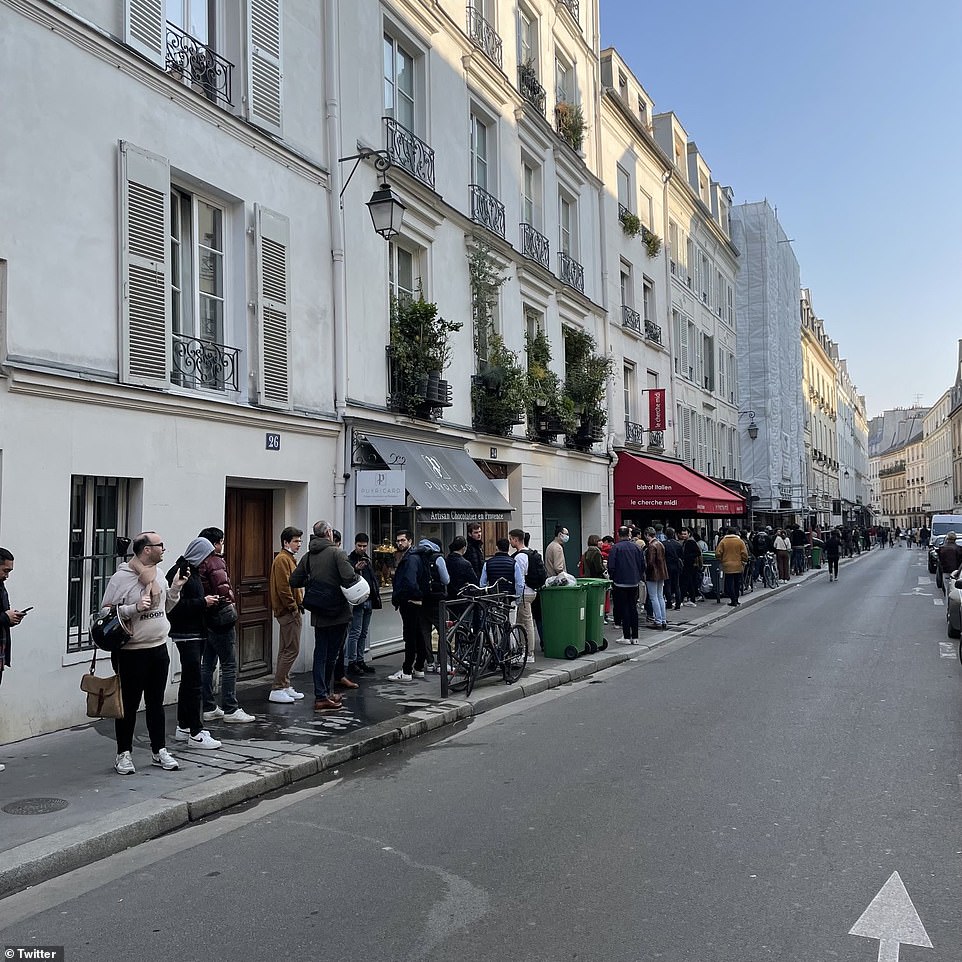 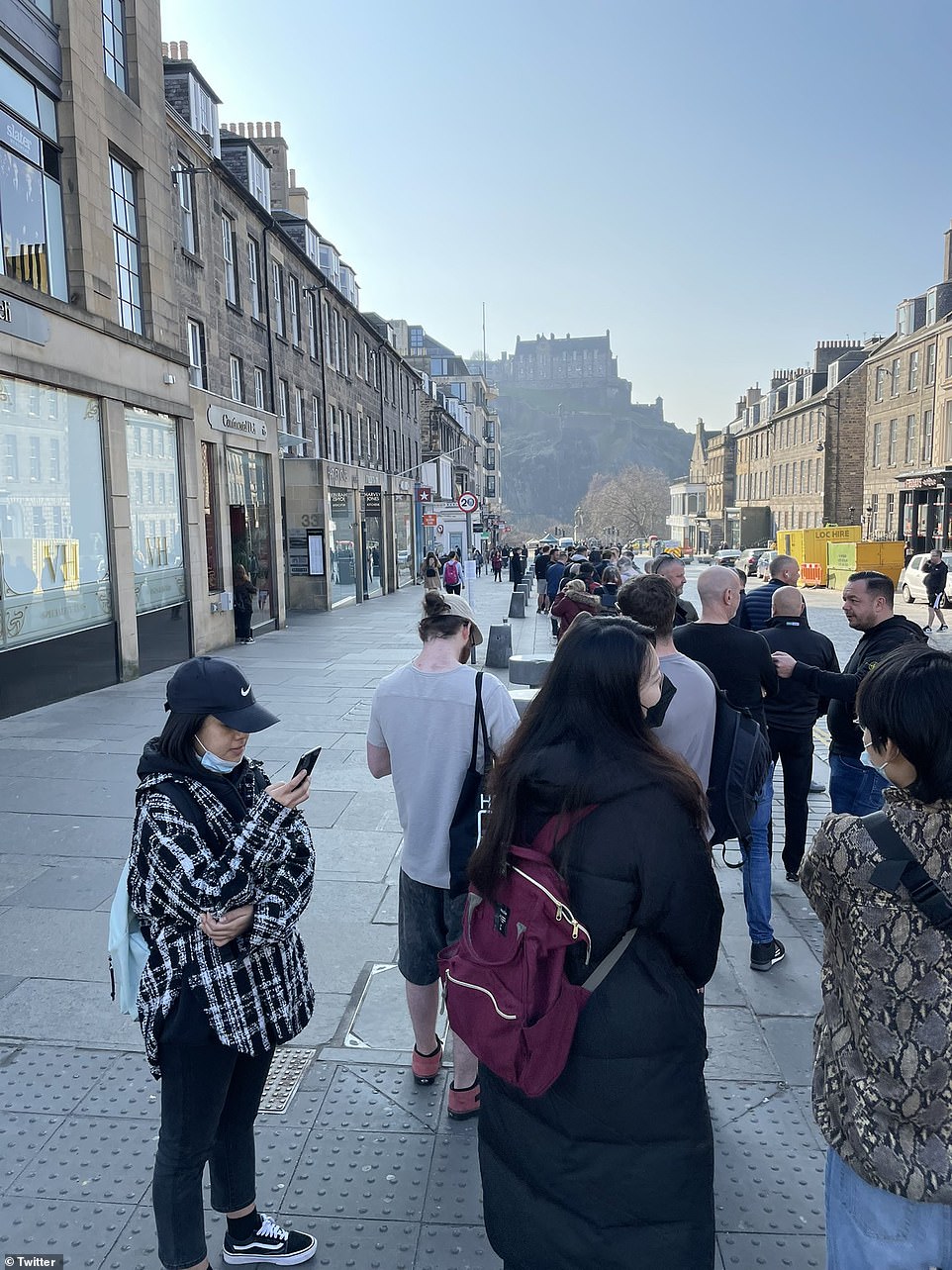 Queue with a view: Customers in Edinburgh at least had decent weather and a view of the city’s castle while they waited 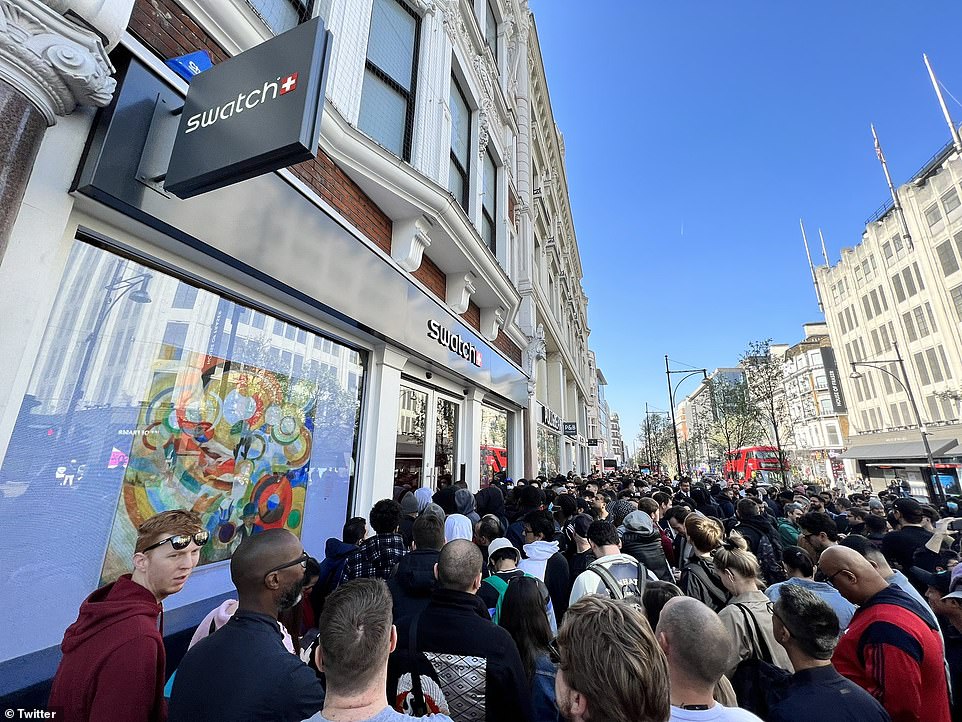 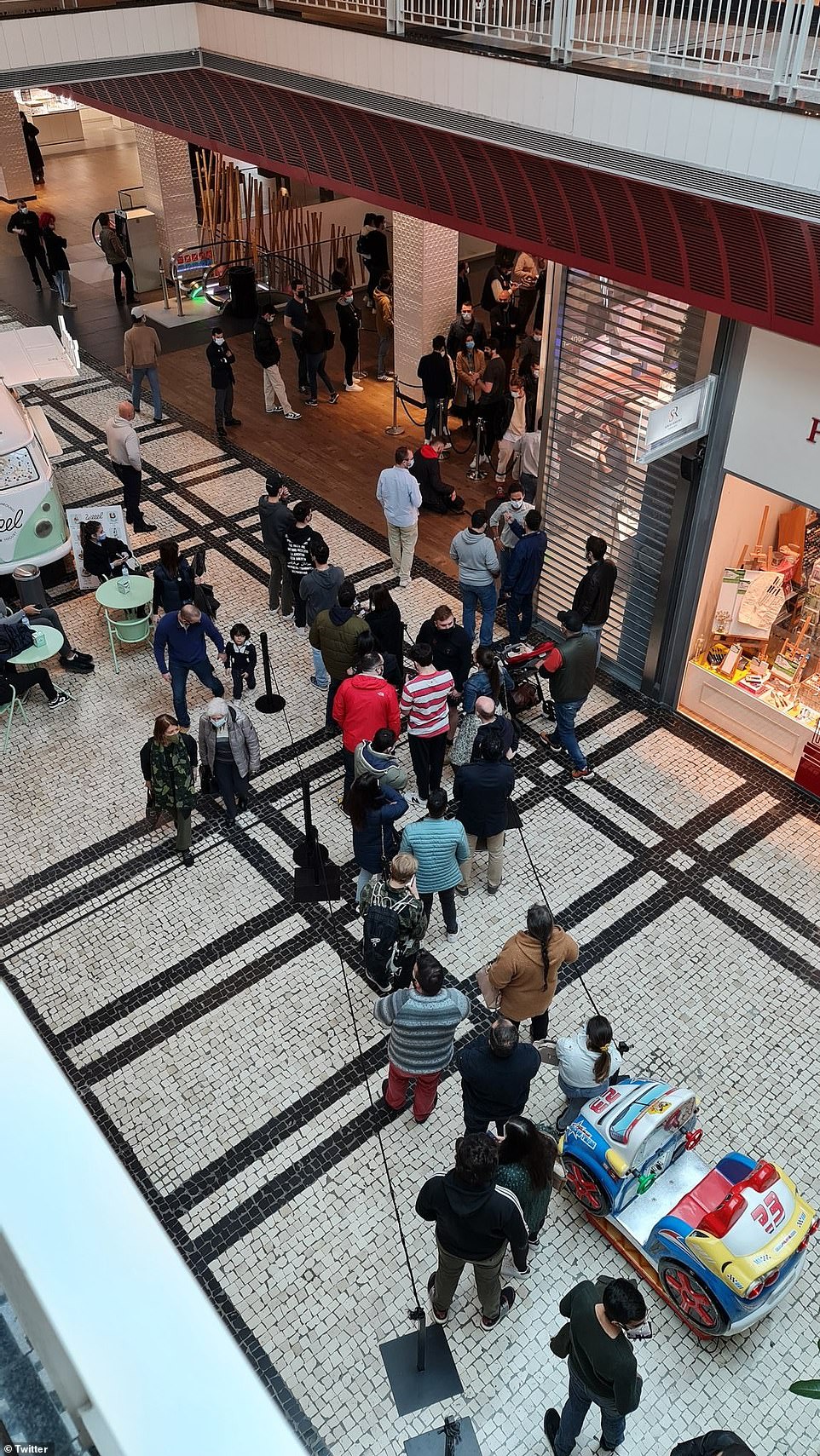 The collaboration between Omega and Swatch has been highly anticipated and was officially released today. Pictured: Porto 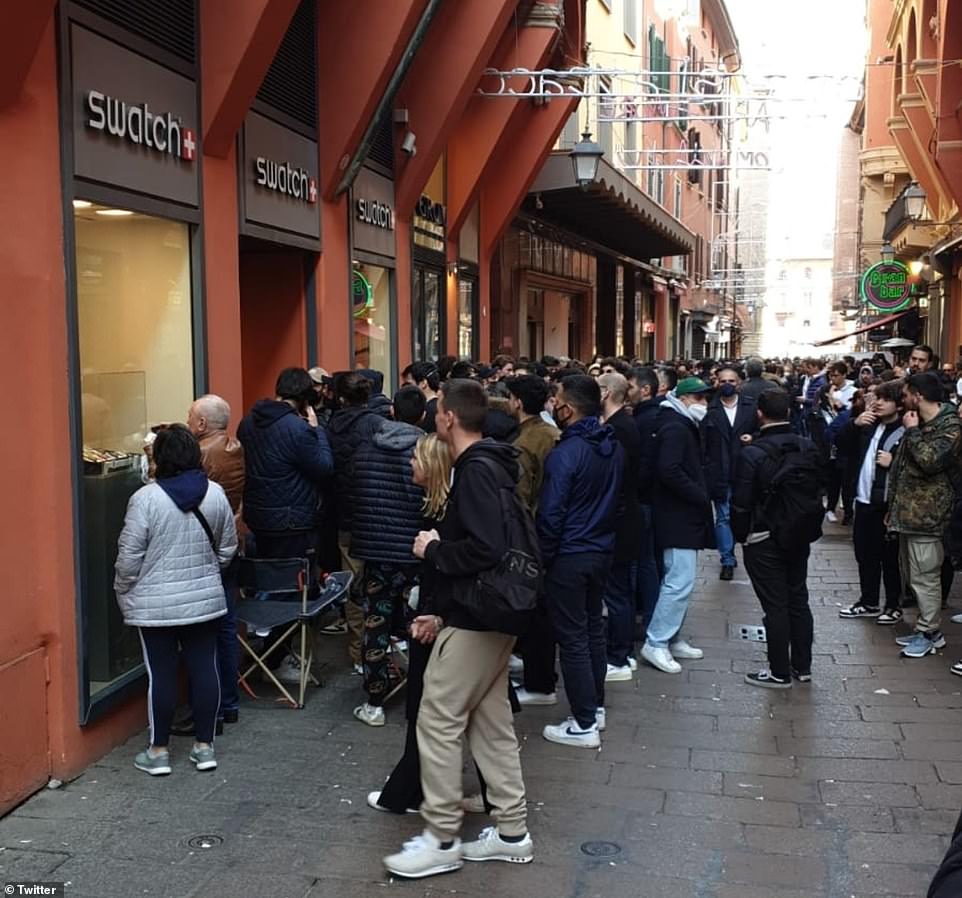 In total, the companies have released 11 versions of the MoonSwatch. Pictured: Swatch fans queue in Bologna, Italy 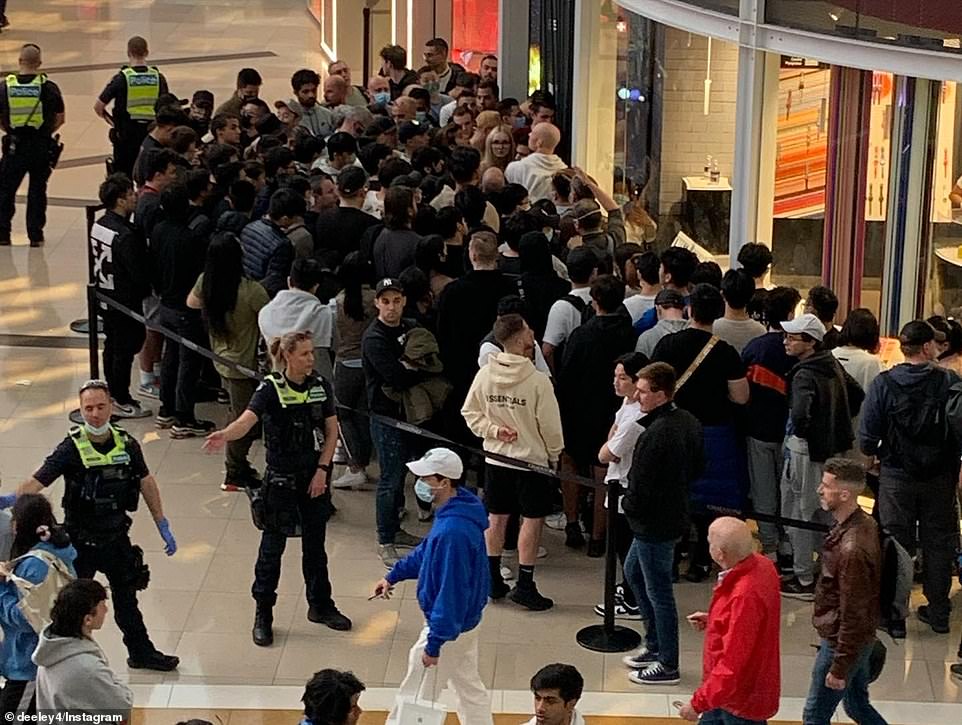 Police were forced to help security and manage the growing crowd of customers (pictured: Chadstone in Australia) 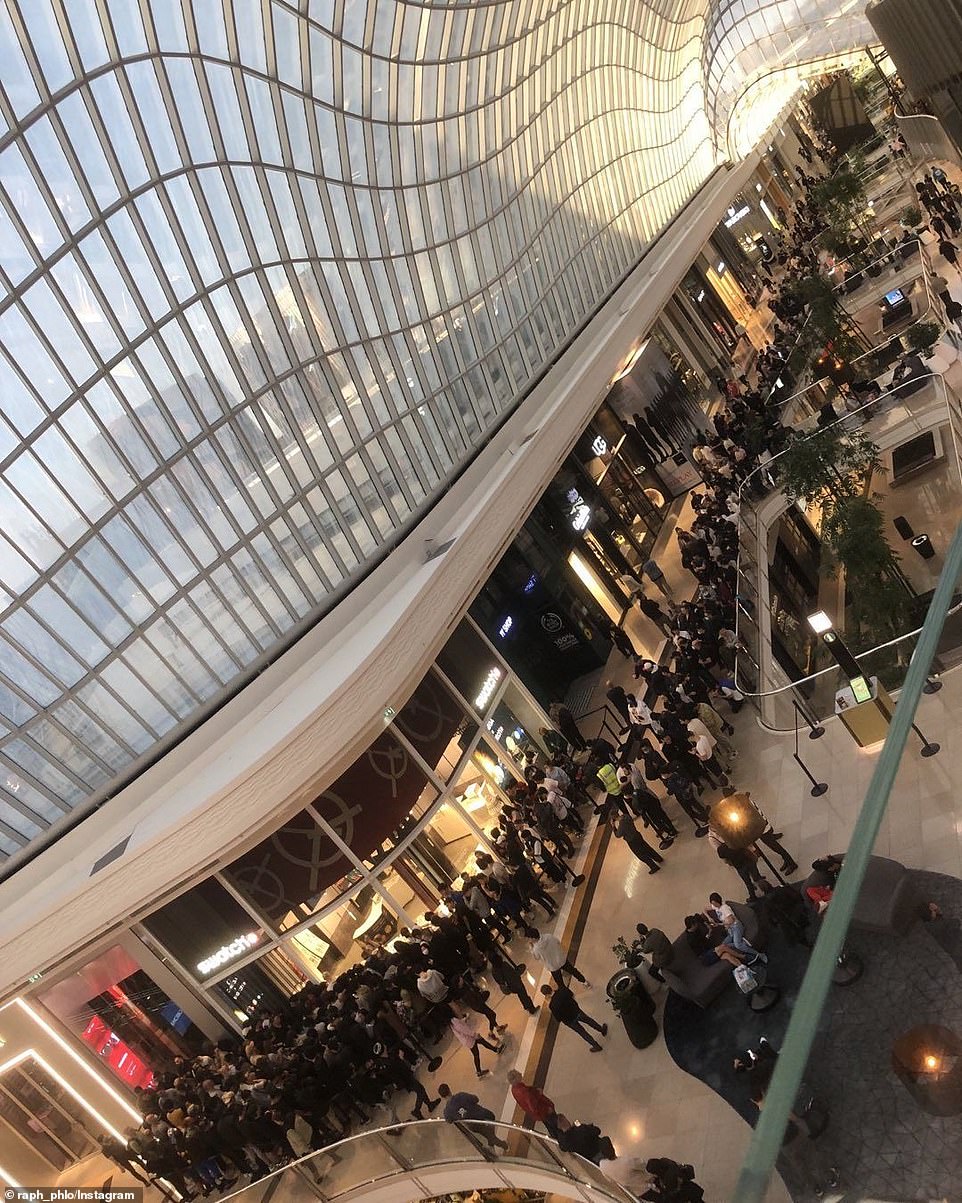 Melbourne: queue snaked from the front of the store and continued hundreds of meters down one side of the shopping center

The company said in a statement: ‘Omega’s Moonwatch is legendary and a must-have for collectors. Swatch’s witty BIOCERAMIC MoonSwatch collection makes the iconic design accessible to fans everywhere.

‘It’s a down to earth take on the watch that went to the moon, which is a perfect representation of Swatch’s joy of life and innovation philosophy.’

Speculation had been swirling for months of a collaboration between Swatch and Omega – before it was confirmed the MoonSwatch would be launched on March 26.

Each watch is based on a space theme and titled after a planet or moon – with all the names beginning with the word ‘Mission’.

The watches have been designed so the colors and layouts reflect the planets they are named after.

‘The Swatches are perfect for budding Moonwatch fans, and I can’t think of a more appropriate icon for our shared project,’ said Raynald Aeschlimann, president and chief executive officer of Omega. ‘We went to the moon; now we’re exploring the whole Milky Way. ‘