Bridgerton’s new star Simone Ashley, 26, says show’s color-blind casting has freed her from being typecast – as millions tune in to the first episode of the latest series on Netflix

By Katie Hind Showbusiness Editor For The Mail On Sunday

Bridgerton belle Simone Ashley says the Regency romp’s color-blind casting helped to convince her that she could star in a period drama.

The British-Indian actress, who plays headstrong leading lady Kate Sharma in the second series of the hit show, revealed that she no longer considers the color of her skin when seeking new roles.

‘I didn’t watch period dramas because I felt like I couldn’t relate to them, maybe because I couldn’t see myself in one,’ says Simone.

‘Then Bridgerton came along.’

As millions tuned in to the first episode of the new series last week on streaming channel Netflix, fans welcomed the casting of two South Asian characters – Kate and her sister Edwina, played by Charithra Chandran.

In an interview with Glamor magazine, which is online now, Simone says she felt typecast earlier in her career because of her skin color, but says nowadays her appearance is not a factor.

‘I always saw myself for my personality and not for the color of my skin,’ she says.

‘Representation matters, and there is a minority that needs to be represented more, and I’m very aware of that.’

Simone Ashley (pictured), who plays leading lady Kate Sharma in the second series of the hit show, revealed that she no longer considers the color of her skin when seeking new roles 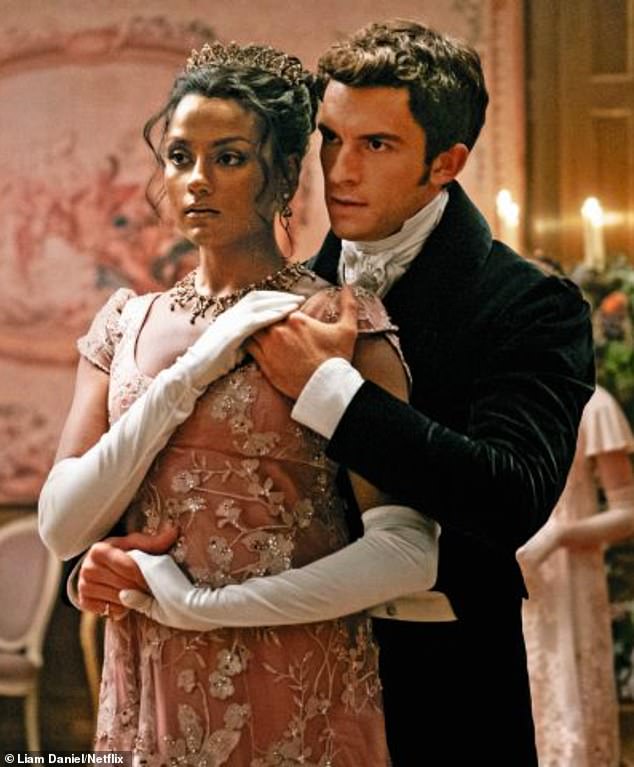 But she adds she wants ‘to be seen as an actress who has talent and has a brain, and it just doesn’t matter what I look like.’

In the second series of Bridgerton, Simone, 26, from Camberley in Surrey, stars alongside Jonathan Bailey, who plays the show’s heartthrob, Anthony Bridgerton.

Simone takes over the leading lady role from Phoebe Dynevor, who as Daphne Bridgerton has only a small part in this series.

The role meant Simone having to grapple with the discomfort of wearing a corset.

She says: ‘That was interesting because when you’re in a corset you can’t put your shoes on.

‘On my first day, I thought,’ OK, first day as a leading lady, got to eat lots of food, be really energized. ‘

‘So I had this massive portion of salmon and that’s when I needed to be sick, because I was wearing the corset. I realized, when you wear a corset, you just don’t eat.

‘It changes your body. I had a smaller waist very momentarily. Then the minute you stop wearing it, you’re just back to how your body is. I had a lot of pain with it, too. I think I tore my shoulder. ‘ 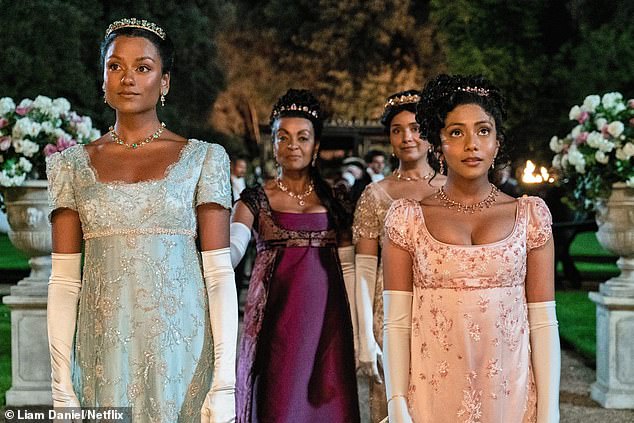 Simone (far left) takes over the leading lady role from Phoebe Dynevor, who as Daphne Bridgerton has only a small part in this series

Simone, whose parents are immigrants from India, said she would have struggled to cope during the Regency period because of her feminist principles.

But she hailed her Bridgerton character for inspiring her to be more headstrong.

She says: ‘Don’t be afraid to be difficult. It’s a word that we hear a lot these days. ‘Oh, lei she’s being difficult or tricky’, when maybe someone’s just following their instincts and speaking out for themselves, and I think, why not? It’s not a bad thing. You’re just taking care of you. ‘

Simone added that playing no-nonsense Kate had been an education. ‘I’m learning to be more headstrong. Kate’s really mature and I’ve learned a lot from her in that sense. ‘