By Matt Powell For Mailonline

The UK boss of diary giant Arla has said that customers are likely going to face higher prices to buy a pint of milk, as farmers are being squeezed by soaring costs.

‘We are calling time on cheap milk,’ said Ash Amirahmadi, as the business set out its plan for the next five years.

Farmers have been facing squeezed milk prices for years. In the last 10 years consumer prices have gone up 26% as a whole, Mr Amirahmadi said, but the price of milk has dropped by 7% in the same period.

The boss of UK’s largest supplier of fresh milk, Arla, has called time on cheap milk saying that inflation combined with supply chain issues following Russia’s invasion of Ukraine will force the price to go up (graph of the cost of milk per liter in the UK ) 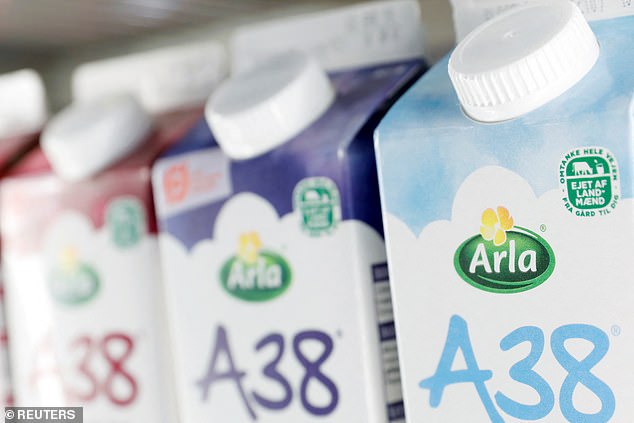 ‘This strategy is about improving the profitability of fresh milk,’ he said.

‘We saw the inflation on farms, on feed, fertilizer and fuel, starting around June or July last year.

‘There were already some pressures building, but since the Ukraine crisis that’s just increased exponentially, particularly things like fertilizer.’

It could take some time for costs to be passed through to shoppers, he said, but over the next five years things are likely to change.

Arla’s five-year strategy could see it become the first dairy to export milk at scale out of the UK to tap into higher milk prices abroad. 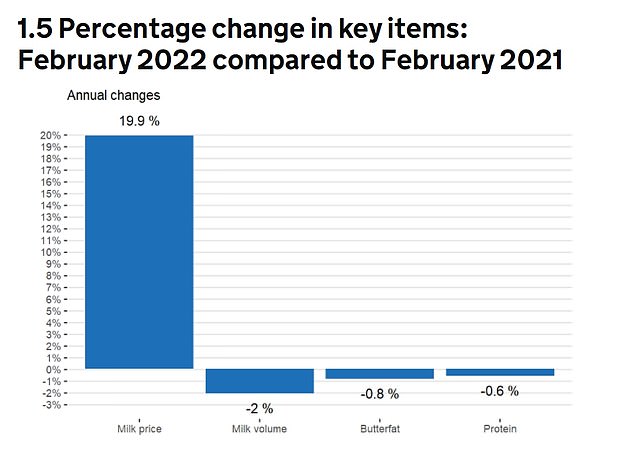 The average farm-gate milk prices have risen significantly in the past year, 19.9%, while other dairy products such as butterfat and protein have remain stable (DEFRA statistics)

The business said there are signs that demand for dairy around the world will increase by two per cent every year over the next half decade.

It warned there are ‘clear signals’ that milk producers might not be able to meet that rise.

Recent fairer deals between supermarkets and dairies have not been enough to offset huge recent price rises. Just like for many parts of the economy, agriculture is facing runaway costs.

Fuel prices have increased significantly and fertilizer costs are also through the roof, Mr Amirahmadi said.

The UK’s largest supplier of fresh milk, Arla’s products can be spotted on supermarket shelves around the country. They include Cravendale, Lactofree, Lurpak and Anchor.

Fuel prices and recently fertilizer prices, which have increased due to the Russian invasion of Ukraine, have added significant costs to farmer producing milk (file photo)

The cooperative’s 2,100 UK farms also supply some of the own brand milk that supermarkets sell.

Farmers are also facing added costs to invest in new ways of producing which can help fight catastrophic changes to the climate.

Mr Amirahmadi said Arla farmers are experimenting with innovative new technologies such as different feeds that could reduce emissions.

Cows are major emitters of methane, a potent greenhouse gas which produces an impact much greater than carbon dioxide.

By changing what the cows are fed, the amount of methane that they burp or fart can be reduced.

The business is also trying to increase the biodiversity on its farms and is reviewing different options for packaging.

By 2030, all packaging will be made from recycled materials.