Until recently, electric vehicles have been unaffordable for most drivers, with prices 37 per cent higher than for petrol or diesel models. But with prices at the pumps closing in on an eye-watering £ 2 for a liter of petrol, the balance is shifting.

Even with the 5p-a-liter tax cut announced by Chancellor Rishi Sunak last week, the cost of petrol and diesel has risen by 8p and 16p a liter respectively since the start of this month alone.

New figures for The Mail on Sunday reveal that the fuel savings for switching to electric have hit a record high of £ 779 a year on average for petrol drivers – £ 738 for diesel drivers.

The saving has grown by £ 157 and £ 165 respectively in the past year, according to transport research firm New Automotive. While electricity prices have soared, petrol and diesel costs have risen faster.

This, with other incentives and tax breaks, means that for an increasing number of drivers it may now make financial sense to stump up the higher upfront cost of an electric car in return for lower day-to-day running costs.

Steve Tigar, chief executive of car leasing firm loveelectric.cars, says: ‘People are experiencing the pain of handing over £ 90 to fill up their cars, and come home to search online for electric cars.

‘We saw interest surge last month as petrol prices rose sharply. The upfront cost of £ 40,000 or £ 50,000 means electric cars are out of the reach of most households. Yet there are ways to slash costs, while the day-to-day savings are increasingly enticing. ‘

A lack of access to charging points has been a barrier to switching to electric for many drivers. However, the Government responded to this concern last Friday by setting a new target to increase the number of chargers tenfold to 300,000 by 2030.

How to crunch the numbers

Although narrowing, there is still a significant ‘green premium’ on electric cars. Not only are new electric cars over a third more expensive, but used electric cars also tend to be £ 8,000 more costly on average, according to Auto Trader.

Furthermore, the number of models priced at less than £ 20,000 dropped from 11 in 2020 to just three last year, the car marketplace reveals.

However, the Government wants to encourage drivers towards greener options, so there are several generous incentives available.

There is no vehicle tax on electric cars, a saving of typically £ 155 a year. Plus, there are grants of up to £ 1,500 on the purchase price of some electric cars. These are available on cars with a recommended retail price of less than £ 32,000, including VAT and delivery fees.

The Electric Vehicle Homecharge Scheme provides funding of up to 75 per cent towards the cost of installing a charge point at your home.

However, from next month the scheme will only be open to homeowners who live in flats or people in rented accommodation.

There is also no congestion charging for driving into city centers. The congestion charge for London is currently £ 15 a day. Bath, Birmingham, Bradford and Bristol are set to introduce similar clean air zones.

For example, EDF has a tariff for electric car users that provides half-price electricity at 11.5p per kilowatthour between 9pm and 7am and all weekend.

Octopus Energy has a similar tariff that offers electricity at 7.5p per kWh nightly between 12.30am and 4.30am.

By comparison, from next month most suppliers will be charging households on ordinary tariffs 28.3p per kWh under the new price cap.

To get cheap overnight charging on a domestic tariff, you need to be able to charge your car at home.

If you are paying for public charging points, costs are higher and vary wildly. New

Automotive has a calculator that allows you to fill in your vehicle details and work out if you could save money by switching to electric. Go to: electriccar.guide/ev-comparison

Can you get around the upfront cost?

For most drivers, the initial outlay is the biggest hurdle to electric vehicle ownership. To get round it, one option is to lease an electric car. You will have to give the vehicle back or pay the balance at the end of the lease term. On the upside, you only pay a monthly cost to drive one. Many leasing services include insurance and maintenance costs, so you avoid a lot of extra charges.

A little-known tax break could help cut costs further – in some cases by almost half. Many employees will be familiar with salary sacrifice schemes as a way of buying a new bicycle or getting childcare vouchers at a lower cost, because the Government allows you to avoid the usual tax contributions. The same scheme can be used with electric cars.

Plugging in saves £ 50 a month

Technician Adrian Willett prefers the feel of driving a petrol car to driving an electric car. But, when he realized he was spending more than £ 100 a week on fuel, he decided it was time for a change.

He says: ‘I switched from a petrol-loving Audi to an electric Kia e-Niro about four weeks ago, which proved to be good timing with the way the world is going at the moment. 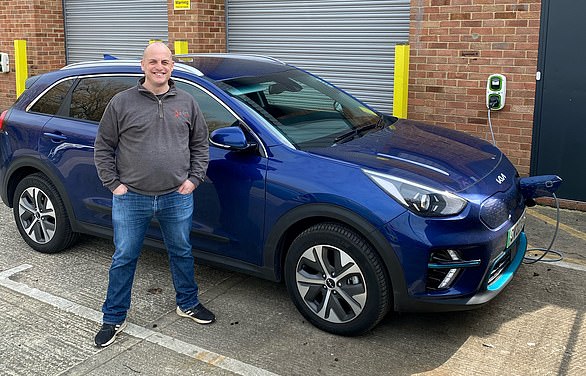 Switch: Adrian Willett realized he was spending more than £ 100 a week on petrol, he decided it was time for a change

‘Yes, I find a car with a combustion engine more fun to drive, but I am enjoying the experience of going electric.’

Adrian, left, commutes to engineering firm Dash-CAE in Abingdon, Oxfordshire, from his home in Banbury – a round trip of 66 miles. He reckons he can drive about 120 miles on one charge. He says: ‘I charge my car at work, where it costs around £ 10 and takes just over eight hours. I do that a couple of times a week.

‘If I charged it at home using a normal plug it would take 38 hours. I haven’t yet installed a special charging point at home which would dramatically reduce the time. ‘

Adrian uses a salary sacrifice scheme to rent his Kia, making the monthly cost £ 385 instead of the £ 560 it would have been otherwise.

‘It’s a big monthly bill, but it includes insurance and maintenance, so it still amounts to a big saving,’ he says.

‘Every penny counts these days.’

Loveelectric, which supplies electric cars in this way, says a higher-rate taxpayer earning more than £ 50,271 a year could cut the cost of leasing a Tesla Model 3 from £ 615 to £ 320 a month using salary sacrifice. A basic rate taxpayer earning between £ 12,571 and £ 50,270 could lease an electric Fiat 500 hatchback for £ 197 a month, compared with £ 340 a month if they were not using a salary sacrifice scheme.

Both examples assume a lease term of four years and agreed mileage of 5,000 miles a year.

Salary sacrifice means the monthly lease payments are deducted from your gross rather than net salary.

This means that you save on income tax, while both you and your employer pay less National Insurance contributions.

Since payments are taken directly from your salary, before you sign up you need to check what happens with the contract if you leave your job. Also those on defined benefit pension schemes should check if their final pension will be affected.

Should you buy second hand?

Until recently, the second-hand market for electric cars was small. But Ben Nelmes, at New Automotive, believes that this is set to change later this year.

Nelmes says that in the past drivers may have been wary of buying an electric car second hand in case the battery capacity was impaired.

But studies show that car batteries today typically retain 95 per cent of their capacity after clocking 100,000 miles.

Ben Foulser, UK head of future mobility at management consultant KPMG, believes the purchase price of electric cars should match that of petrol and diesel by 2025 because the price of batteries – the most expensive component – is falling.

And factories are scaling up production to meet the ban on the sale of new petrol and diesel cars by 2030, creating economies of scale.

However, as prices fall, subsidies to encourage a switch to electric may well be withdrawn, he warns.

‘A key question is how long these incentives will continue,’ he says. ‘There are already calls for a national road pricing scheme to replace lost Treasury income and to manage demand for road space.

‘Electric company car benefits could be tightened as the Government encourages the use of public transport, walking and cycling.’

Supply chain issues could also lead to higher prices and delays on some models. Earlier this month, Tesla raised prices in the UK, with its cheapest vehicle, the Model 3, rising by £ 1,000 to £ 43,990.